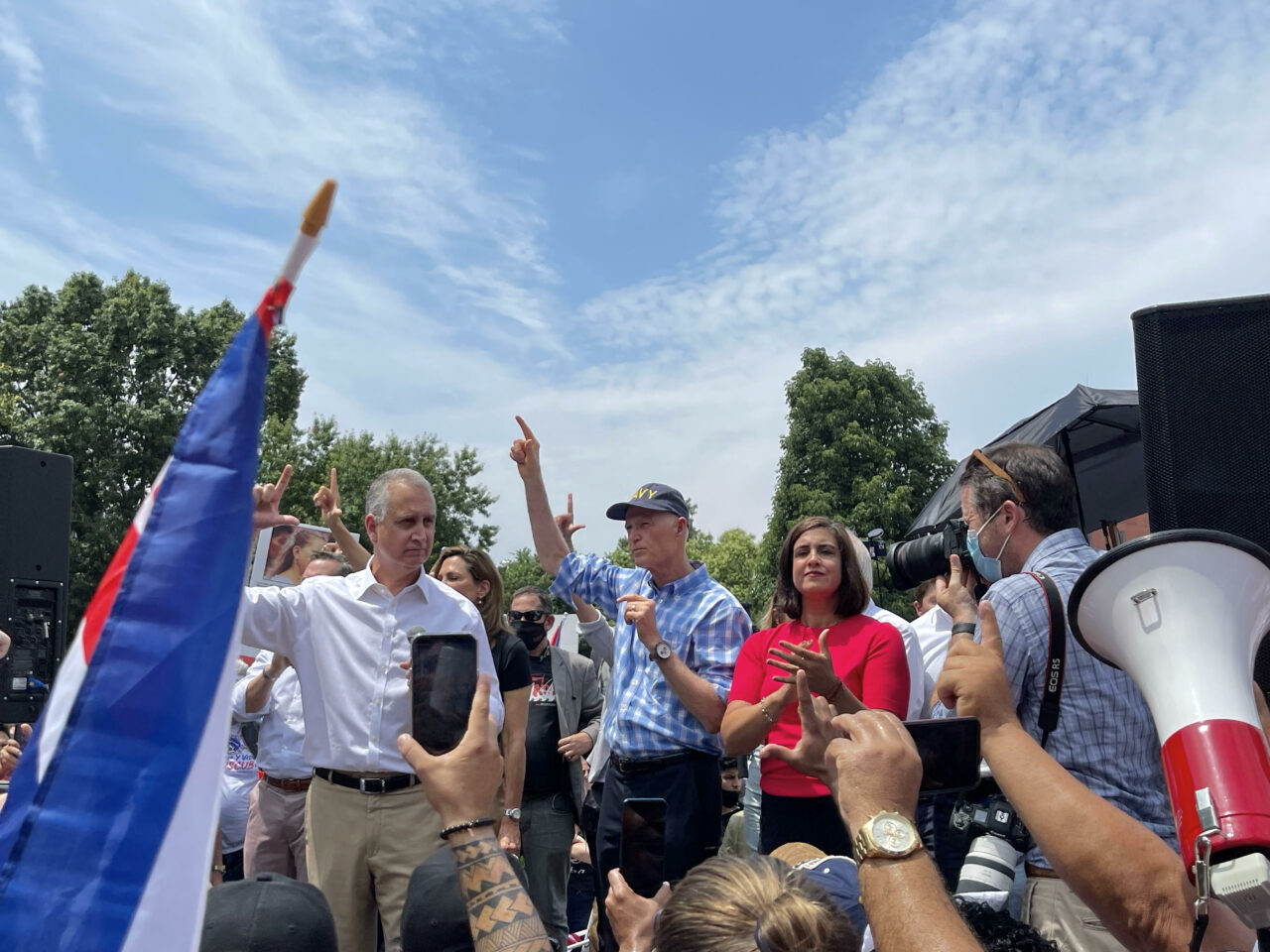 "Where the hell are you, Mr. President?”

As the crackdown on protests against long-withheld freedoms, poor living conditions and a failed response to the coronavirus pandemic persist in Cuba, Cuban expatriates, their children and those supporting a free Cuba continue to take to United States streets in solidarity against human rights violations on the island.

Monday marked the 68th anniversary of deceased Cuban dictator Fidel Castro’s failed attack on the Moncada barracks, which started the 1953 Cuban revolution. At around noon, thousands of protesters converged on Lafayette Square across from the White House for impassioned, hyperpartisan speeches by several Republican members of Congress, most of whom represent Florida.

In a 12:30 p.m. live video of the speeches streamed by Pembroke Park-based WPLG Local 10, peaceful protesters encircled what looked like a roughly 10-square-foot stage. Many hoisted Cuban flags and wore T-shirts with text expressing support for a free Cuba, including “#SOS Cuba,” “Cuba Needs Freedom,” “Patria y Vida” and at least one with a swastika likening the Cuban regime to that of Nazi Germany.

Sen. Rick Scott, Florida’s former Governor, called for the removal of the Cuban embassy in Washington and delivery of internet access to Cuba.

The communist regime of Miguel Díaz-Canel this month blocked internet access on the island to prevent images of protests from reaching worldwide outlets. Many videos and photos still got out.

“The Cuban dictatorship is illegitimate. They should not have an embassy in the United States of America,” Scott said. “Joe Biden needs to show up and talk about all the atrocities, all the people and all the family members who have been killed for protesting, who have been beaten up and thrown in jail. He wants to be part of the world stage. He wants to be friends with all the (world leaders). Then lead America in freedom for Cuba now.”

The Biden administration in February said it planned to lift restrictions on business and travel to and from Cuba put in place during President Donald Trump‘s term and to reenter diplomatic talks with leadership on the island. The move appeared to be a return to the foreign policy the U.S. employed under President Barack Obama.

But in a July 22 statement, Biden “unequivocally” condemned the “mass detentions and sham trials that are unjustly sentencing to prison” Cuban protesters, who he said have “the same right to freedom of expression and peaceful assembly as all people.”

The President announced new sanctions targeting “elements of the Cuban regime responsible” for suppressing protesters, including General Álvaro López Miera, Minister of the Revolutionary Armed Forces of Cuba, and the division of the Cuban Ministry of the Interior.

That same day, the U.S. Department of the Treasury’s Office of Foreign Assets Control announced additional sanctions against López Miera and a Cuban Ministry of Interior Forces special unit it referred to as the “Black Berets.”

Biden, who is weighing further sanctions against the dictatorship, is reportedly also considering an idea from Gov. Ron DeSantis and Sen. Mark Rubio to restore internet access for Cuban residents with balloons.

DeSantis said that he has yet to hear from Biden on the matter.

In a Thursday statement, Democratic Florida House Rep. Nick Duran praised Biden for his “unwavering” support of the Cuban people. The Democratic National Committee is launching a digital ad directed at Cuban voters in South Florida to showcase the President’s support for Cuban liberty.

But Biden’s actions so far are nowhere near enough, said U.S. Rep. Michael Waltz, who represents Florida’s 6th Congressional District and is one of the U.S. House’s most vocal hawks on America’s relationship with communist leaders in China.

“Where is Joe Biden’s leadership for America and for freedom and for Cuba?” he asked the crowd Monday. “You know why he’s so quiet? Because he’s afraid of the left, and the left is afraid of all of you, because you know what you proved? Socialism has not worked, will not work and has failed in Cuba (and) will fail in the United States.”

U.S. Reps. Carlos Giménez and Maria Elvira Salazar, both of  South Florida, spoke mostly in Spanish. Salazar called the current Cuban regime “satánica,” or “satanic.” Giménez, a former Miami-Dade Mayor and City of Miami manager, led resumed chants of “Where is Biden,” before pointing to the White House and saying, “He’s over there.”

U.S. Reps. Dan Crenshaw of Texas, Nicole Malliotakis of New York, Victoria Spartz of Indiana and Mike McCaul of Texas, who serves as the lead Republican on the House Foreign Affairs Committee, also addressed the crowd.

McCaul, who said Díaz-Balart should be President of Cuba — Díaz-Balart emphatically waved off the suggestion and shook his head “no” — took aim at Democratic Socialists in Congress like U.S. Rep. Alexandria Ocasio-Cortez and her allies known as “the Squad,” as well as Mexico President Andés Manuel López Obrador, who on Sunday said Cuba should be declared a World Heritage site.

“We need a maximum-pressure campaign on the regime,” McCaul said. “We need our international partners to support the people of Cuba.”

Before ending speeches ahead of a march to the White House and the Embassy of Cuba, the politicians ceded the microphone to Miami-based Cuban human rights activist Rosa María Payá Acevedo, daughter of activist and Christian Liberation Movement leader Oswaldo Payá, who died in 2012.

“We don’t want negotiations,” she said. “Nobody has to speak for the Cuban people. The Cuban people have a voice, and that voice is demanding freedom.”