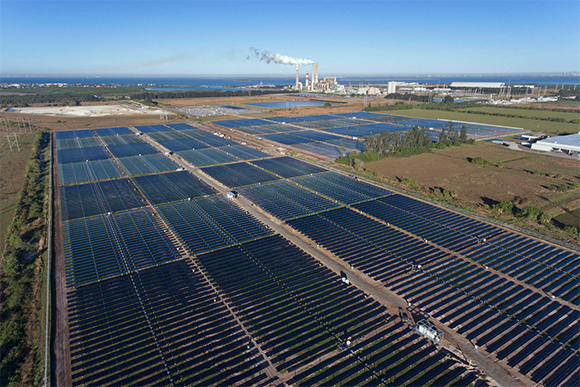 The utility plans to retire three coal plants and double its solar output within two years.

Tampa Electric is looking toward a greener future after finalizing an agreement with consumer advocates on rates for the upcoming year.

As part of the unanimously agreed-upon deal announced this week, customers can expect significant investments in clean energy and efficiency.

“We are committed to continuing to drive down our greenhouse gas emissions, and a central element of how we will do that is by continuing to invest in solar energy,” Collins said.

— The retirement of three coal-burning generating units at Big Bend, as part of Tampa Electric’s march to end reliance on coal.

— A smarter energy infrastructure and upgraded equipment for reliability and convenience.

Tampa Electric has already made substantial progress to build a cleaner, greener and smarter energy future.

In the last five years, the company reduced consumption of coal by 95%. Over the last two decades, Tampa Electric has cut the total amount of greenhouse gas emissions it generates by 50%. While at the same time, the company produces 25% more power than it did 20 years ago.

Collins says to expect that number to double in two years.

“We’re really proud that we are the leading utility in Florida,” Collins told the Times. “When it comes to how much solar energy we have in our portfolio on a per-customer basis, we have the most. And the amount that we have today will be doubled in another two years — we’re constructing another 600 megawatts worth of solar as we speak.”

Under the new rates, beginning Jan. 1, 2022, a typical residential customer using 1,000 kilowatt-hours will see their bill go up 14% to $120.46 from the current $105.25. This reflects a 2% increase after the upcoming temporary fuel adjustment, which begins in September.

Despite this rise, Tampa Electric notes that its utility bills will remain significantly below the national average and among the lowest in Florida.

Now the agreement heads to the Public Service Commission for approval, and, if passed, the new rates will take effect on Jan. 1.

Customers can plan and manage the rate changes now through Tampa Electric’s flexible payment arrangements and energy-saving programs for homes and businesses.