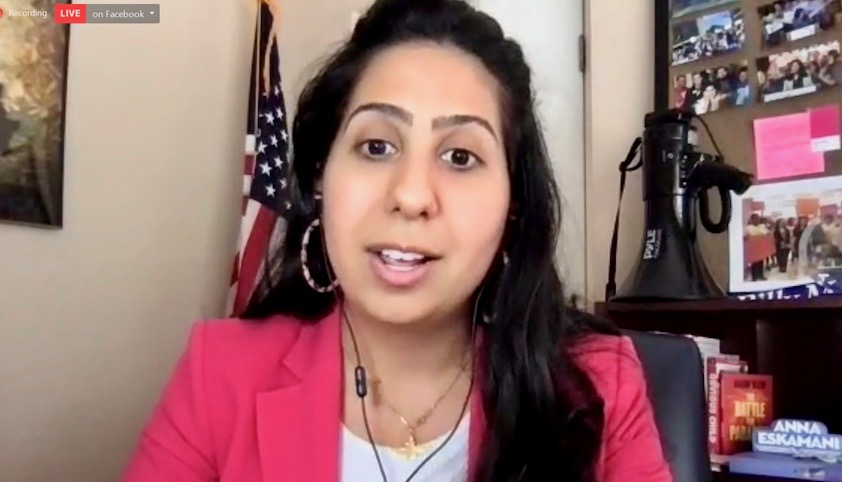 Declaring “this is a crisis and there’s no way to sugarcoat it,” Democratic Rep. Anna V. Eskamani joined a national call Wednesday urging the Biden administration to make it a top priority to help deliver Afghan refugees to safety.

“We have a moral obligation to do what’s right and support the Afghan people at this moment,” Eskamani said Wednesday in a national “Afghan Rapid Response” forum organized by a humanitarian aid group called We Are All America.

Three Afghan refugees on the call did not reveal their full names, in order to shield family back home from retaliation. The three, identified as Leena, Aisha, and Shamail, and Basma Alawee, campaign manager of We Are All America, told of Taliban atrocities of the past and what they are hearing now from family members hiding from anticipated new atrocities. These come despite the Taliban’s pledges to grant amnesty and safe passage for refugees.

Twenty years of American warfare and occupation ended swiftly this month as the Taliban took control of everything except the last remaining American military stronghold, the military side of the Kabul airport.

Afghan refugees on the call spoke of terror, women in hiding, heavily armed Taliban militants everywhere, and reports of slayings.

They also spoke of impenetrable American bureaucratic delays their family members and others face trying to get SID visas from the U.S. State Department to leave. They strongly disputed statements from President Joe Biden and his administration that anyone really wanting to get a visa has been able to do so.

“That statement is completely not true,” Leena said.

Eskamani also said the U.S. must accept responsibility for refugees who can get out. She urged local and state leaders to find ways to welcome them into communities. She said she has asked Gov. Ron DeSantis “to be aggressive” in offering resettlement help from Florida.

“I’m prepared to make sure that every American elected official understands that we play a role, not only in pushing for a robust humanitarian response to our Afghan allies, but also to ensure that it’s not just about getting our refugees to this country, it’s about the settlement process,” she said.

“We also cannot be naive to the fact that the history in this country is one that has a huge backlash toward people who look like me, who look like our Afghan refugees. That does suggest we have a big role in assuring their safety as they escape persecution and come to the United States to call our country home,” Eskamani said. “So we have to move fast in welcoming refugees and make the processing as fast as possible, to save lives.”

Tens of thousands of Afghan refugees, at a minimum, are at risk. Alawee said the people most vulnerable to Taliban persecution are not just those who aided the American efforts there, but women, girls, LGBTQ Afghans, people with disabilities, and people in minority religious groups.

She said if Biden wants to take responsibility, he needs to ensure “there continues to be robust protection for vulnerable populations in Afghanistan while providing clear protections for all Afghans seeking refuge from violence.”