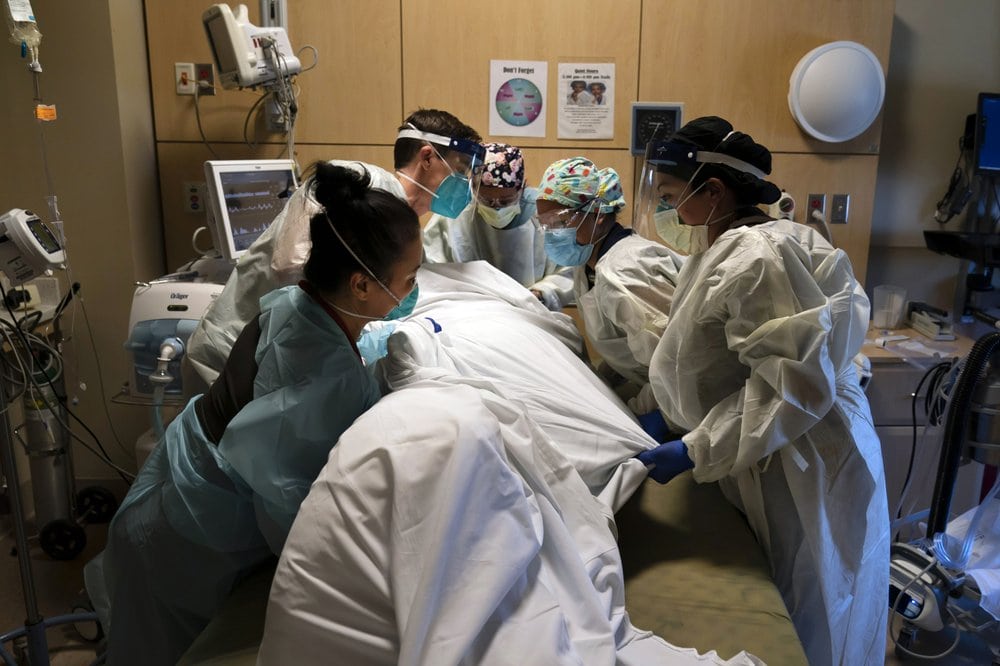 About 200 new COVID-19 deaths are being recorded every day in Florida.

This month Florida is seeing its deadliest days yet of the COVID-19 pandemic.

At no time in the coronavirus pandemic has Florida recorded more deaths attributed to COVID-19 than last week. And trend lines are skyrocketing.

The state’s official death toll rose 1,486 in last Friday’s weekly COVID-19 report from the Florida Department of Health. That one-week increase was by far the single-biggest weekly increase since the Sunshine State’s first COVID-19 fatalities were confirmed in March 2020.

While Gov. Ron DeSantis barnstorms Florida encouraging people to try monoclonal antibody treatment if they get COVID-19, and while he and his staff battle with news media over how that effort is being reported, an average of more than 200 new COVID-19 deaths are being quietly tallied in Florida every day.

Previously, Florida’s worst one-week increase in cumulative deaths was recorded during the week leading up to the Jan. 29 state report, when 1,296 new COVID-19 deaths were added to the state’s total.

COVID-19 deaths are difficult to track day-to-day or week-to-week in anything close to real time because local officials can take days or even weeks to determine and report a cause of death. Consequently, the weekly number of new deaths the state reports for any given week is only a fraction of the total number of people who actually died of the disease during that week. The true grim toll is not revealed except over time, as those delayed COVID-19 fatality reports eventually arrive and get added into the state’s running total.

That means most of the 1,486 deaths recorded last Friday likely were of people who died of COVID-19 complications during previous weeks.

Nonetheless, the deaths are real. The cumulative total remains the most reliable measure of mortality. And the surge in fatalities is real — a very recent, tragically-huge loss of life — even if it cannot be easily assigned to any specific day without more detailed information, which the state no longer publicly releases.

What’s more, trends don’t suggest the worst is over, or that things will get better anytime soon.

Past trends from the pandemic have shown that death tolls peak two to four weeks after case totals peak. Florida recorded its worst week for new COVID-19 cases for the pandemic with the Aug. 13 weekly report, showing cumulative cases increasing by 151,764. That was up from 134,751 the week before, and 110,724 the week before that. The Aug. 20 report showed the cumulative total of new COVID-19 cases perhaps plateauing, with 150,740 added in the previous week.

Prior to the past four weeks, Florida had only ever recorded more than 100,000 new COVID-19 cases in a seven-day period once, in early January.

The state’s previous one-week high of 1,296 deaths for a Friday-through-Thursday period — the same seven-day cycle now covered in Florida’s weekly reports — was recorded on Jan. 29, three weeks after the previous high point for new cases was recorded, Jan. 8. That Jan. 29 report marked the fourth in a string of seven consecutive weeks in which more than 1,000 Floridians were recorded each week to have died of COVID-19.

That tragic period of late winter was the worst Florida had ever seen, until now.

In the summer surge of 2020, Florida’s worst week was the one leading into the Aug. 14, 2020, state report, when the state’s death toll went up by 1,214 newly recorded COVID-19 fatalities over seven days. That was the third of four consecutive weeks of more than 1,000 newly recorded deaths. That summer surge came and went more quickly than the winter surge.

Federal authorities compile and post state COVID-19 data through the Centers for Disease Control and Prevention’s HealthData.gov website. However, while the federal government’s posted numbers are usually similar to those publicly released by Florida, they never quite match, day-to-day or week-to-week.

In its most recent report, posted late Monday with data through last Thursday, the CDC site had added 1,380 new COVID-19 deaths to Florida’s running total for the seven-day period.

The federal numbers can be used to compare Florida with other states. No other state is seeing nearly as many people die of COVID-19 as Florida.

With the CDC’s latest report Texas saw its death toll increased by 777 new COVID-19 fatalities over seven days. Louisiana, which has a higher per-capita death rate than Florida’s, saw 389 new deaths recorded in that period; California, 346.

previousEd Hooper to kick off reelection run with Aug. 24 fundraiser