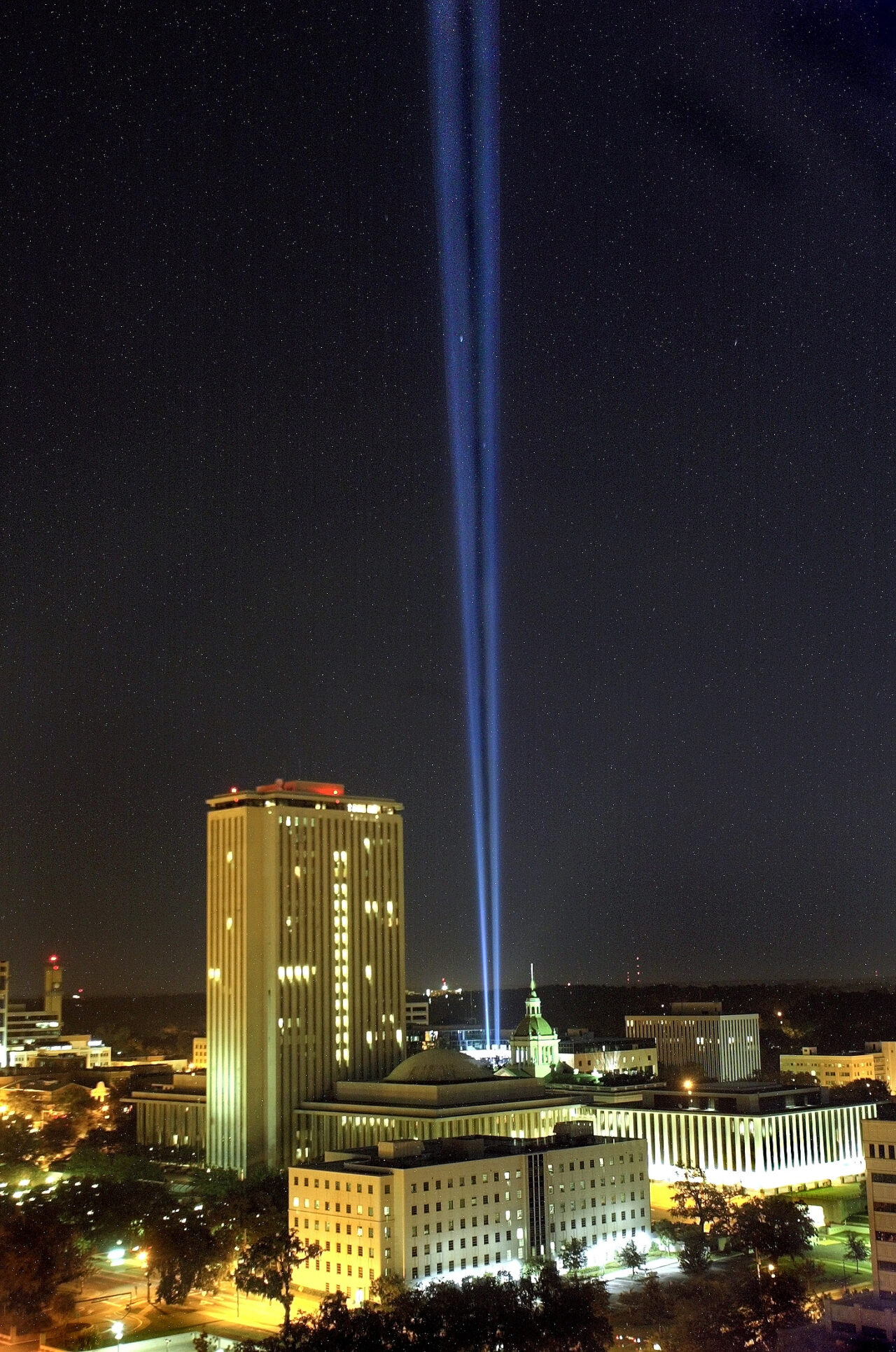 A somberness can be felt across the country today as Americans recognize the 20th anniversary of the 9/11 terrorist attacks, a wound inflicted on the nation Sept. 11, 2001.

As Americans revisit the stories and images of the worst terrorist attack in the country’s history, here is how Florida leaders are marking the day.

Florida Gov. Ron DeSantis, who addressed veterans ahead of the anniversary Friday evening, recognized those who died in the attacks, as well as those who lost their lives serving in the military in response.

“The 20th Anniversary of the terrorist attacks of September 11th, 2001, should prompt us to reflect on the thousands of lives lost and the enduring legacies of those who perished in the attacks,” DeSantis wrote in an statement published by his political committee, Friends of Ron DeSantis. “It is also a time to remember the sacrifices made by so many men and women in our military, as well as their families, in the years since to help protect our country. Empty chairs at the dinner table, missed holidays and birthdays, and precious time with friends and family have all been forfeited in pursuit of a mission for the good of the nation.”

Today marks the 20th anniversary of the worst terrorist attack in America’s history.

We remember the 2,977 individuals we lost and their families, and thank those who continue to serve and protect our nation.

Florida Agriculture Commissioner Nikki Fried released a video message to honor the day, saying, “Everyone can recall where they were, what they were doing, when terror and tragedy struck America.”

“It was a sunny morning in Gainesville, where I was a student government leader at the University of Florida. We all went immediately to the student union to meet with classmates trying to reach family in New York,” she said in the video. “Everyone remembers how they felt that day. And after that, we came together – as one nation. We showed each other kindness and grace. We believed the best of our leaders, regardless of party.

“As we mark 20 years since that fateful day of September 11, as we remember the lives lost and memories honored, above all else, let’s recommit ourselves to being citizens and Floridians together in America, still the greatest nation on Earth,” she said.”

As we mark 20 years since that fateful day, and as we remember the 2,977 lives lost and memories honored, above all else, let’s recommit ourselves to being citizens and Floridians together in America — still the greatest nation on Earth.#911Memorial #September11 pic.twitter.com/bBmqphNtjc

“Today, we pause to remember the first responders who rushed into falling buildings and the veterans who courageously risked their lives. Without hesitation, these heroic men and women answered the call to defend their fellow civilians,” he said in the clip. “They highlighted the inherent good of our country — a selfless dedication to neighbors, complete strangers, and to the country. We cannot allow their memory to fade. Not only must we follow their example, we must also fight for them as hard as they fought for us.”

“As we reflect on one of the darkest days in American history, we honor the 2,977 innocent souls we lost on that tragic day, the countless lives that were irreparably changed, and the families and communities who still grieve the loss of loved ones,” he said in a statement. “That day also gave us stories of courageous heroes, like the brave firefighters, police officers, and other first responders who ran towards the flames to try and save as many lives as they could. Over 400 first responders lost their lives that day – but their sacrifice has left an indelible mark on American hearts and reminds us every year that among the rubble and ruin, there was hope, love, and selflessness.”

Twenty years ago, nearly three thousand lives were stolen in an unthinkable, evil terrorist attack against our country. Today we mourn those we lost and honor the hero first responders who gave their lives to help others. We will never forget. pic.twitter.com/OXduMTTFTo

Similar to Fried, U.S. Rep. Val Demings recalled where she was the day of the attacks.

“I was at Orlando International Airport commanding the Orlando Police’s Airport Division. I will never forget the devastation and heartbreak of that day, and how it changed how we looked at the world,” she said. “Twenty years later, the attacks remain seared in my memory as we work to keep America safe. I have often thought of those we lost — almost 3000 people — and the bravery and sacrifice of so many first responders — 344 firefighters and 71 police officers. As we look back on this solemn day, I hope that every person will join me in saying a prayer for the families of the victims, for peace, and for the safety and security of all Americans.”

On #September11, 2001, I was at Orlando International Airport commanding the Orlando Police’s Airport Division. I will never forget the devastation and heartbreak of that day, and how it changed how we looked at the world. pic.twitter.com/3tWZ0KtbnK

“We honor the memories of those who perished as a result of an evil plan hatched thousands of miles from our shores. We also remember the heroism of so many Americans on that day and the days after,” he said in a statement. “Americans came together in response to that horror, and we vowed to combat terrorism, prevent another attack, and deliver those terrorists to the gates of hell.”

“The United States did not seek the war on terror; it sought us. Yet America was blessed to have a president with the moral clarity and unshakeable resolve to pursue the terrorists and those who harbored them and to take whatever measures were necessary to keep Americans safe. With a broad coalition of military forces, we and our allies spent the next twenty years fulfilling that promise,” he continued. “We also honor the soldiers and Afghan allies who gave it all to successfully defeat terrorists, including the Taliban, and whose mission and legacy were betrayed by an Administration that handed back Afghanistan to the Taliban.”

On the 20th anniversary of the 9/11 terrorist attacks, we honor the memories of those who perished as a result of an evil plan hatched thousands of miles from our shores. We also remember the heroism, goodness, & resilience of our brave first responders & service men & women… pic.twitter.com/PJ0lmXxvkk

Congressman Mike Waltz, a Deland Republican, also referenced Biden’s decision to pull remaining troops out of Afghanistan in his 9/11 tribute.

“Twenty years ago, our nation and the world changed forever as we watched in horror as terrorists hijacked American airliners and used them as weapons to murder nearly 3,000 innocent Americans. While the soul of our nation was devastated by the terrible attacks that day, our spirit was emboldened,” he said in a statement. “It is shameful the 20th anniversary of this attack was used as an arbitrary withdrawal deadline to be used as a political slogan rather than put the safety of Americans first.”

Today, we honor the memories and #NeverForget the Americans lost on 9/11 — and the brave service men & women, like my Green Berets Brian Woods & Matt Pucino, who lost their lives fighting to keep the air we breathe free. 🇺🇸 pic.twitter.com/IXi4LuWEmR

Florida Democratic Party Chairman Manny Diaz said in a statement, “There are only a handful of historical events during anyone’s lifetime that will forever after be considered to have irrevocably changed the world. Anyone who was alive on September 11th, 2001 knows that the terrorist attacks that took place on that day constitute exactly that kind of event.”

“The scale of the tragedy was unimaginable, extending from the foreign policy ramifications of this wanton act of aggression to the devastating effects suffered by so many everyday citizens who either lost their lives or those of loved ones during the course of that day,” Diaz said. “Many of our nation’s brave first responders still suffer from the damaging health effects caused by the difficult and risky tasks they were called upon to perform on 9/11 and its aftermath. For me it was, and still is, truly overwhelming to think about.”
Post Views: 962

nextCases of COVID-19 continue to decline across Tampa Bay, along with vaccinations