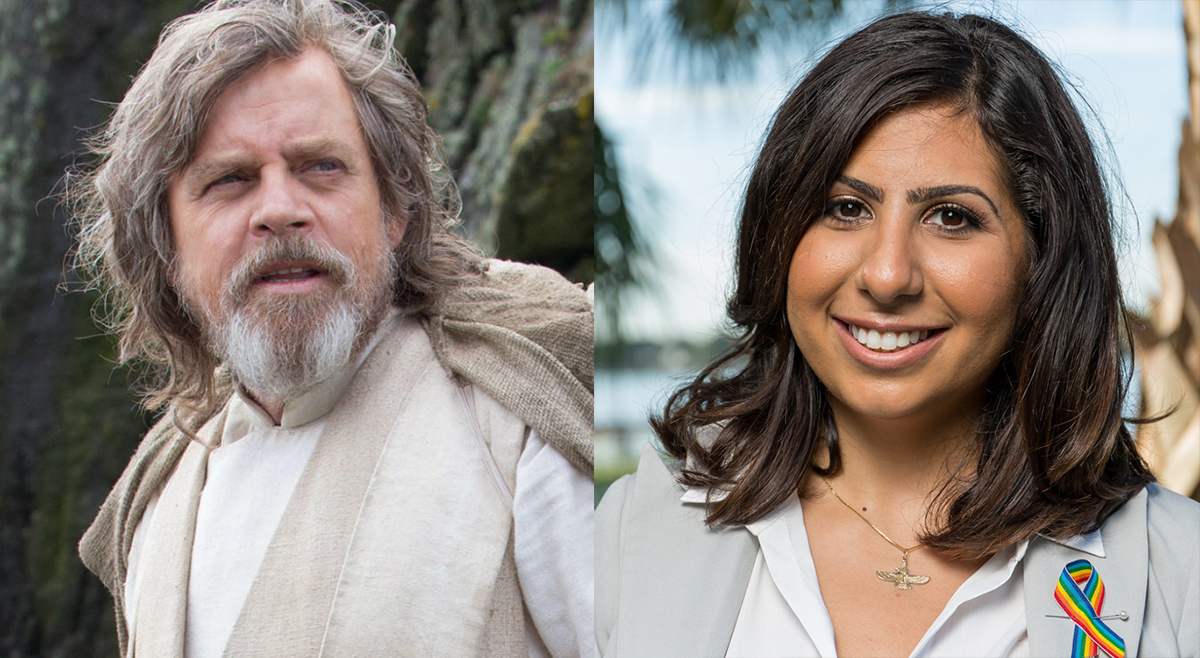 A warrior of 'the resistance' gets help from a Jedi warrior of the Rebel Alliance.

The resistance is joining forces with the Rebel Alliance, so to speak.

Democratic Rep. Anna V. Eskamani, a self-described warrior of the resistance movement among progressives, is getting a boost from Mark Hamill, the most famous Jedi warrior of the Star Wars franchise’s Rebel Alliance.

“I’m so excited and so grateful he’s making the time,” Eskamani, of Orlando, said.

HD 47 covers parts of northern and central Orange County, including parts of Winter Park, Orlando, Edgewood, and Belle Isle. Dwyer entered the race in early August and started with about $3,100. Though she’s calling her October fundraiser a kickoff, Eskamani opened her reelection account in May and has raised about $45,000 so far.

Eskamani and Hamill first appeared together in a Joe Biden virtual campaign event aimed at getting out Florida Democratic voters in 2020.

Eskamani says she is an unabashed Star Wars fan, who grew up with sharing her love of the movies with her parents and feeling like it was a story that connected her immigrant family with so many Americans.

But there’s also that rebel connection.

Besides being a silver screen rebel battling “The Empire” and “The Dark Side” through six of the nine central Star Wars movies, Hamill essentially has joined the resistance movement of progressive Democrats. He has been a visible and outspoken critic of Trump and much of the Republican Party for several years, particularly through a robust Twitter account. Hamill even appeared in a Lincoln Project ad last year attacking Trump.

“In the Florida House I often think I’m up against the Dark Side, whether it’s folks that act without consequences, or folks that are power hungry, or changing the rules on us. There are all these elements I think about what it means to be in the resistance,” she said. “I think Mark Hamill has really become a voice for a lot of us. He’s become a real-life Jedi.”

Eskamani initially planned an in-person fundraising event to kick off her 2022 reelection campaign in June, and she even booked a venue in downtown Orlando. But, she said the summer surge of COVID-19 made her worry about drawing people together in an enclosed space. She decided to hold a virtual event this year instead.

“So I started thinking: ‘How do we make this event something that folks would be really excited about?’ I looked back at the people that make me excited. Star Wars is something that is not only special to me, because I grew up with it as a kid, and I think of my mom and dad,” she said.

She reached out to Hamill. He said yes.

He’ll be the headliner, but Eskamani promised other yet-to-be-announced draws for the fundraiser.

“I think he already knows,” Eskamani said. “But if Harrison Ford wants to join us, that’s fine too.”