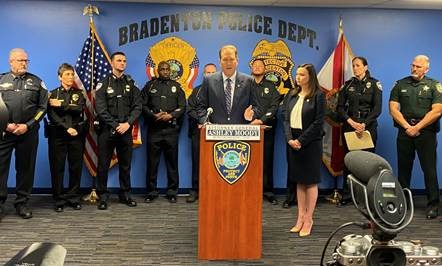 Such a change in federal law would help to “deter offenders from committing violent crimes against law enforcement officers, firefighters, prosecutors and first responders, and to provide appropriate punishment for those who take the lives of public servants,” Moody said.

The House passed a version of the legislation in 2018 and Buchanan has filed a bill in each subsequent Congress. The Longboat Key Republican this year made the bill one of his first at the start of 2021.

“Police officers and first responders put their lives on the line every single day to help those in harm’s way,” Buchanan said. “I appreciate Attorney General Moody’s strong endorsement and advocacy for my bill, the Thin Blue Line Act. Together, we are sending a strong message to police and first responders that we have their backs, and those who target our frontline heroes should know that there will be severe consequences.”

Moody and Buchanan pushed for the legislation after the Florida Department of Law Enforcement issued an alert on a suspect, Patrick McDowell, believed to have killed Nassau County Sheriff’s Deputy Joshua Moyers during a traffic stop Friday.

Local law enforcement leaders and elected officials joined Moody and Buchanan to back the bill and the blue. Manatee County Sheriff Rick Wells and Bradenton Police Chief Melanie Bevan joined them at the lectern, as did state Sen. Jim Boyd, state Rep. Will Robinson and Bradenton Mayor Gene Brown.

According to the Officer Down Memorial Page, 295 officers have died in the line of duty in the U.S. so far this year. That includes 32 in the state of Florida, which has lost more officers than any other state but Texas.

That number includes all causes of service death, including 179 officers who died of COVID-19. The second-leading cause of death was gun fire, which claimed 41 officers’ live.

Notably, Buchanan and Moody have worked together on a number of criminal justice issues in the past, including banning child sex dolls and stopping the import of fentanyl from overseas.

next$300 million factory will build cubesats at Cape Canaveral