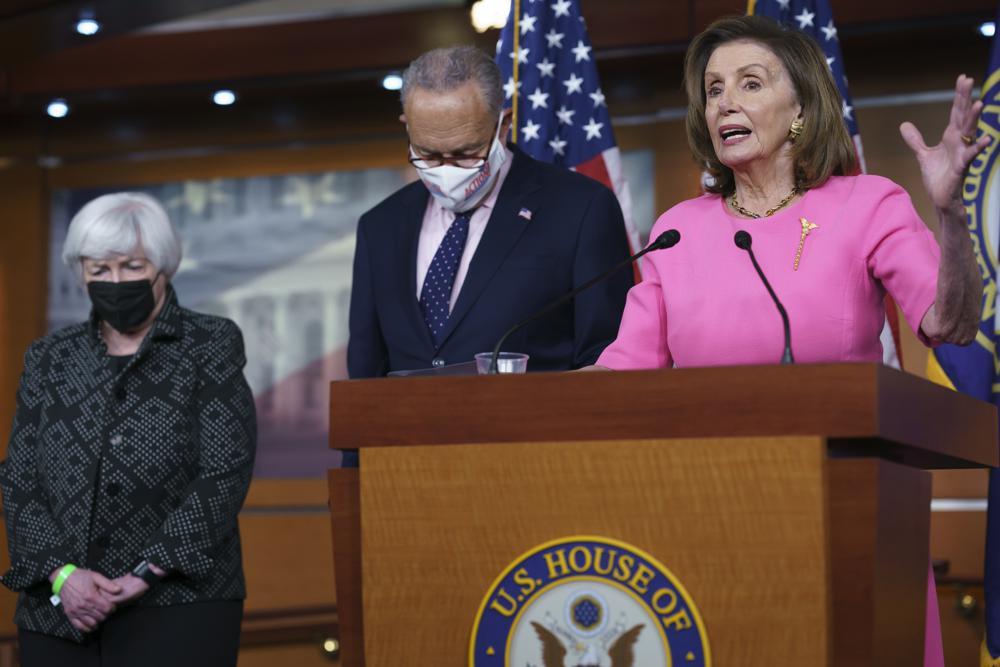 Success would mean a landmark accomplishment. Failure could end careers.

Free pre-kindergarten and child care subsidies for families with small children. Dental care and hearing aids for seniors with Medicare. Infrastructure improvements in every state.

There’s a lot in President Joe Biden’s $3.5 trillion government-reshaping plan, and it’s hitting a tumultuous time. With Republicans solidly opposed, Democrats are rushing to trim the total and finish up the big package, an enormous undertaking with consequences certain to shape Biden’s presidency and their own political futures.

Success would mean a landmark accomplishment. Failure could end careers.

All this, as other deadlines swirl this week to pay for government operations and allow more borrowing or risk a devastating federal shutdown or debt default — though those dire scenarios appear unlikely.

“You know me, I’m a born optimist,” Biden told reporters Monday, as he rolled up his sleeve for a COVID-19 booster shot. “We’re gonna get it done.”

While a a series of votes are being lined up in the House and Senate, the real action is unfolding behind the scenes. Biden is personally calling lawmakers in an effort to resolve differences and bring his sweeping domestic policy vision forward.

He said Monday he was planning to have more talks on possible steps forward in the evening and Tuesday.

Ticking off the weighty list of goals to accomplish, Biden said: “If we do that, the country’s going to be in great shape.”

Biden and his Democratic allies in Congress are seeking a once-in-a-generation reworking of the nation’s balance sheets — asking corporations and the wealthy to pay more taxes and then investing that money back into federal programs for Americans young and old.

Building on a $1 trillion bipartisan public works package that’s already cleared the Senate and is heading for a House vote, Biden is seeking major spending for health care, education and efforts to tackle climate change. The total price tag, he contends, is actually “zero” — covered by the expected increase in tax revenue.

But Republicans say it’s real spending that can’t be afforded, and a reflection of the Democrats’ drive to insert government into people’s lives.

And so far, the bill is also too big for key Democrats whose votes are needed in the face of the GOP opposition. Democratic leaders are working furiously to trim back the $3.5 trillion proposal to win votes.

Thursday is a new deadline of sorts, as Congress also must pass legislation to keep routine government operations going past the fiscal yearend and renew transportation programs in the public works bill.

More immediately, the Senate set a test vote for late Monday to keep the government funded and avert a federal debt default before Thursday’s fiscal yearend deadline. That measure stood to run into a blockade by Republican senators — ensuring lawmakers would have to try again later in the week.

The more difficult action now lies in the Senate, as Democrats are under pressure to amass the votes for Biden’s bigger, $3.5 trillion package.

Two Democratic holdouts, Sens. Joe Manchin of West Virginia and Kyrsten Sinema of Arizona, have said they won’t support a bill of that size. Manchin has previously proposed spending of $1 trillion to $1.5 trillion.

With all Republicans opposed, Democratic leaders can’t spare a single vote in the 50-50 Senate, relying on Vice President Kamala Harris to break a tie to pass the eventual package.

But Pelosi said Sunday it seems “self-evident” that the price tag will come down to meet the concerns of remaining lawmakers.

“We’ll see how the number comes down and what we need,” she added. “I think even those who want a smaller number, support the vision of the president, and this is really transformative.”

Her comments reflected the enormous stakes for the coming week, one that could define the Biden presidency and shape the political contours of next year’s midterm elections.

Democrats have only a few votes to spare in the House for Biden’s massive agenda. Some Republican senators did back the $1 trillion public works bill, but now House Republicans are objecting, saying it is too much.

While progressives say they have already compromised enough on Biden’s big bill, having come down from a bill they originally envisioned at $6 trillion, some are also acknowledging the more potential changes.

Rep. Pramila Jayapal, a Democrat from Washington who heads the Congressional Progressive Caucus, didn’t rule out additional cuts to the $3.5 trillion proposal to reach agreement.

“If somebody wants to take something out, we need to hear what that is,” she said.

The House Budget Committee on Saturday advanced a first version of the $3.5 trillion, 10-year bill, though one Democrat voted “no,” illustrating the challenges party leaders face.

The overall bill embodies the heart of Biden’s top domestic goals, with billions for rebuilding infrastructure, tackling climate change and expanding or introducing a range of services, from free prekindergarten and child tax breaks to dental, vision and hearing aid care for older Americans.

While Democrats are largely in agreement on Biden’s vision — many ran their campaigns on the longstanding party priorities — stubborn disputes remain. Among them are splits over which initiatives should be reshaped, including how to push toward cleaner energy or to lower prescription drug costs.

previousLast Call for 9.27.21 — A prime-time read of what’s going down in Florida politics