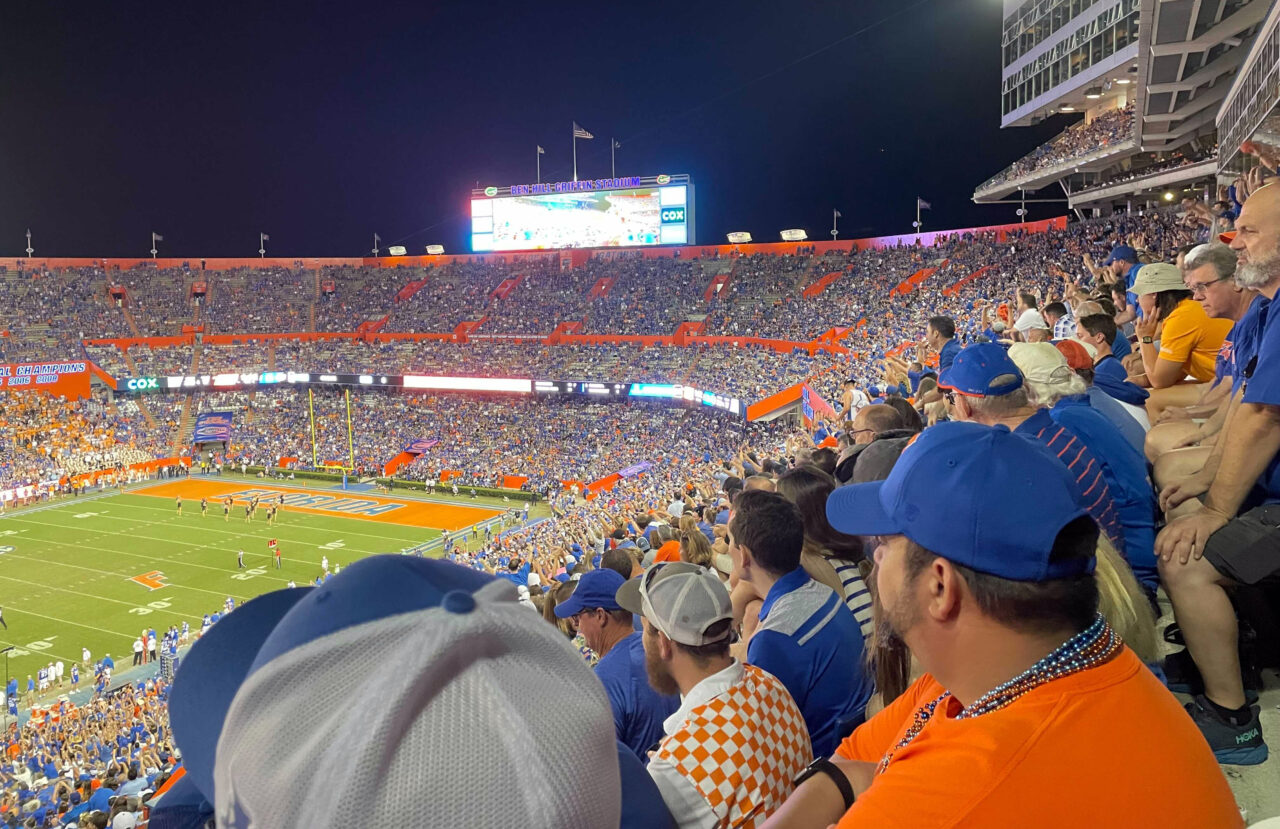 'It was fun when I was there, but now I'm paying the price for it.'

College football stadiums across Florida with tens of thousands of non-masked, screaming students and boosters packed closely together have so far resulted in no recognizable community outbreaks amid the pandemic, according to infection figures on the state’s biggest campuses.

The season began amid fears that big games could become superspreader events. Now, nearly halfway through the season — which kicked off as the highly infectious delta variant was still spreading across the U.S. — the days and weeks after home games showed no significant surges on college campuses.

In back-to-back weekends last month for No. 20 University of Florida, for example, roughly 90,000 people crowded for several hours into Ben Hill Griffin Stadium for each game, where there were no requirements for vaccinations, masks or social distancing. Infection numbers on campus didn’t escalate dramatically in the days or weeks afterward, which would cover the typical COVID-19 incubation window.

At Florida, with more than 53,000 students enrolled, the school has diagnosed an average of 16 positive cases each day since the semester began. Student sections have been packed full at the Gators’ home games so far, including its opener against Florida Atlantic and games last month hosting No. 1 Alabama then Tennessee. Homecoming is this weekend, another test of the public health risk in the stadium, known as the Swamp.

Have crowded college football stadiums turned out safer than everyone expected?

In interviews, health experts offer possible explanations: higher-than-expected vaccination numbers; fans who already contracted the virus; a coincidental national decline in delta cases since mid-September; lack of robust contact-tracing that might be skewing numbers; and inconsistent testing across campuses that might be suppressing figures even among students who feel sick after games.

Until the fall semester started, for example, UF required students on campus to wear masks inside classrooms and be tested weekly — one explanation for its record number of more than 13,000 positive cases since March 2020. Now, students are encouraged but not required to wear masks in classrooms and be tested if they suspect they have been in contact with an infected person. No one enforces those expectations.

“If I wasn’t feeling well or if I was exposed, I would not put myself in the situation, and I would hope to believe that everyone else is doing the same moving forward,” said Taylor Rouchon, 21, of Pensacola, a junior studying sport management. “I just don’t want to miss out on games. You know, we can’t live in fear for the rest of our lives.”

“We’re on the tail end of our delta spike in cases, so I do think there is some factor there,” said Dr. Cindy Prins, an associate professor of epidemiology at Florida. “We’ve unfortunately had a lot of people who did get infected that adds to the people who have immunity right now.”

Infection numbers were also low — and dropping — at other football schools across Florida. The Seminoles lost a nail-biter in their home opener to Notre Dame, with more than 68,000 in the crowded stadium. Florida State said it tested 2,745 students, faculty and staff and recorded only 88 positive cases on campus over the next two weeks. Now in a bye week, the school has its next home game Oct. 23 during its homecoming weekend.

At the University of South Florida in Tampa, the Bulls lost to the Gators in its home-opener Sept. 11 at Raymond James Stadium, in front of nearly 65,000 fans. The school of more than 50,000 students said it recorded only 103 positive cases on its main campus over the next two weeks.

“I think because the student body is highly vaccinated, and in Tampa, as well, I would be very surprised if there’s a strong outbreak connected to the football game,” said Dr. Edwin Michael, a professor of epidemiology at the school. He said the university’s contact-tracing efforts have diminished, making it harder to link cases to superspreader events.

Cases reported by the University of Miami have fallen each week on campus since the Hurricanes’ home opener Sept. 11 against Appalachian State, with roughly 45,000 attending each of four consecutive home games through the end of last month. In the two weeks after its opening win over the Mountaineers, Miami said it tested 22,190 students and faculty and recorded only 41 cases on campus.

In the two weeks after beating Boise State in its Sept. 2 home opener, the University of Central Florida said it recorded 289 cases on campus. Storms limited attendance at that game, but more than 38,000 attended the Sept. 11 home game in Orlando against Bethune Cookman.

In a statement, the press secretary for Gov. Ron DeSantis — who was captain of his college baseball team at Yale — compared Florida’s relatively open rules for events like college football games to restrictions in place at universities elsewhere in the U.S.

“In some parts of the country, the college experience will never again get back to normal,” spokeswoman Christina Pushaw said. She also noted that “fully vaccinated students and staff still test positive,” although so-called breakthrough cases have been relatively rare and hospitalization rates among vaccinated patients are very low.

Packed stadiums had worried professors on campuses who were concerned about infections running rampant through classrooms after football weekends. At Florida, after the packed season opener, the union representing faculty urged the administration unsuccessfully to consider moving classes online, requiring masks and vaccinations and improving testing and tracking for infected students, faculty and staff.

“The decision has been made that we will take the risk of packing the stadium, and saying that whoever gets sick is tolerable or if they die that’s tolerable because the game matters more,” said Steven Kirn, co-chairman on the pandemic task force for the United Faculty of Florida.

After Florida beat Tennessee, Sean Sorrick, 20, of Naples, a junior studying psychology, said he felt sick afterward. The school said nearly 89,000 attended that game. He believes he caught a cold that was circulating on campus.

“I got the cold that everybody else has got that is going around,” he said. “It was fun when I was there, but now I’m paying the price for it.”

This story was reported by Elisabell Velázquez and produced by Fresh Take Florida, a news service of the University of Florida College of Journalism and Communications. Velazquez can be reached at [email protected]. 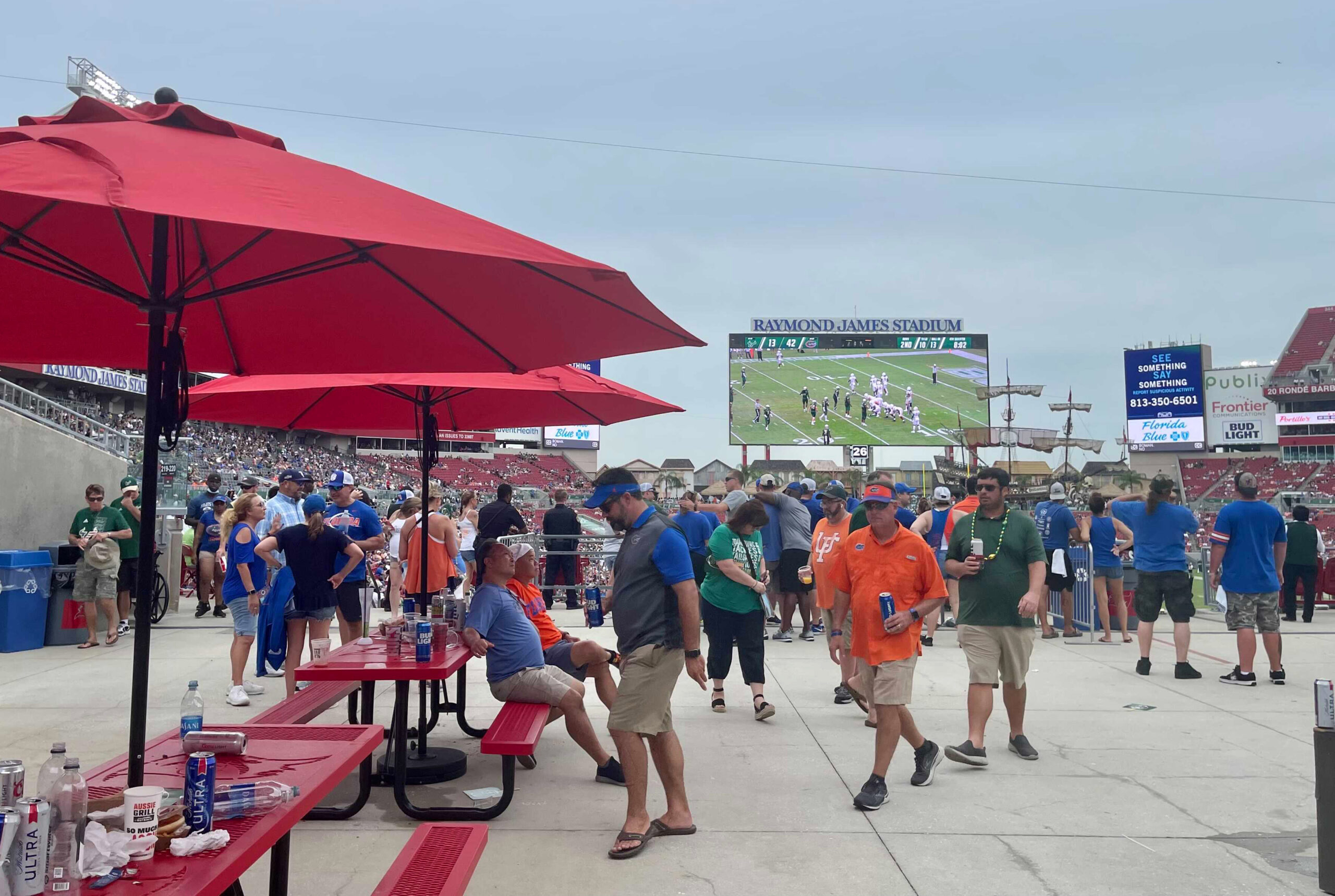 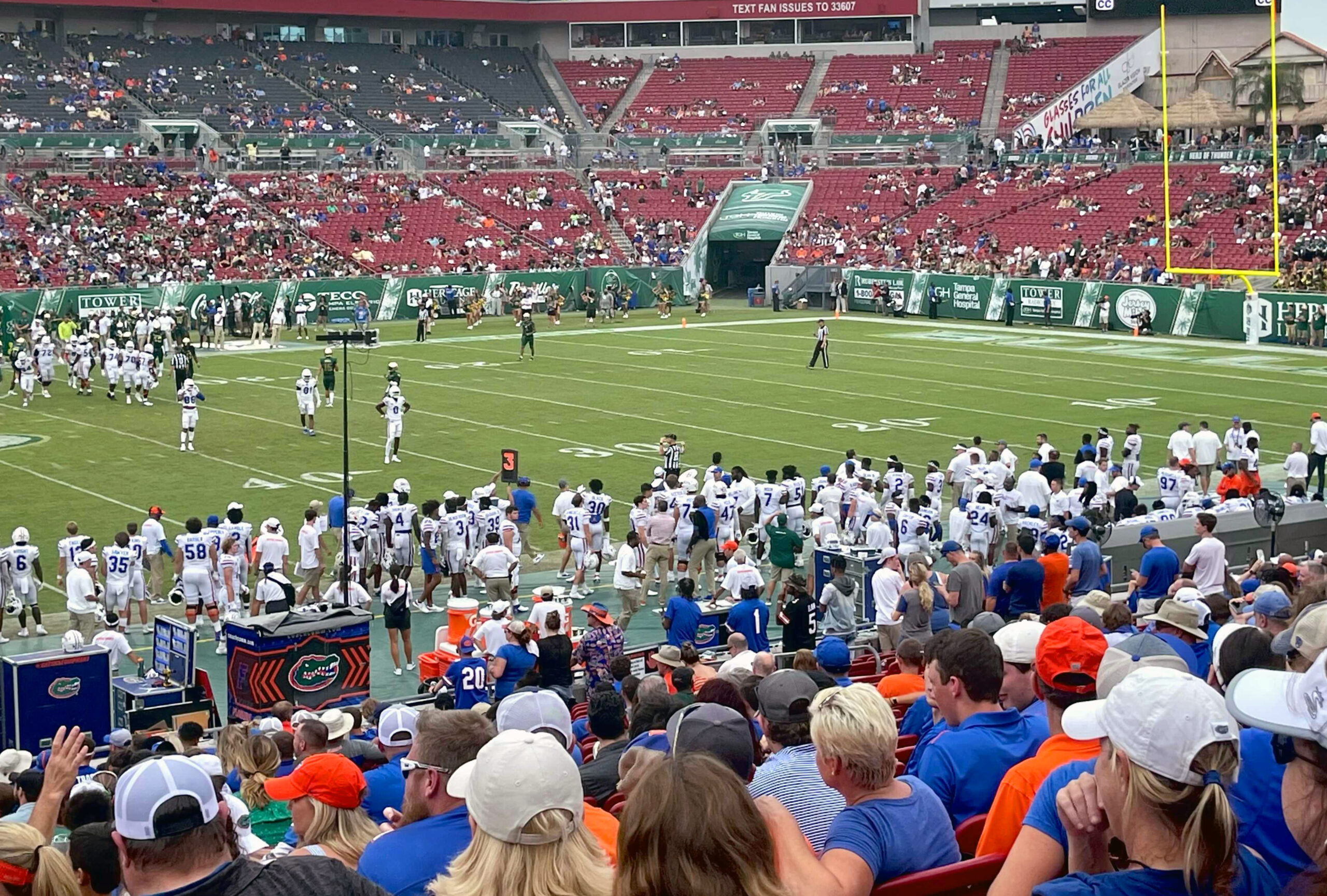 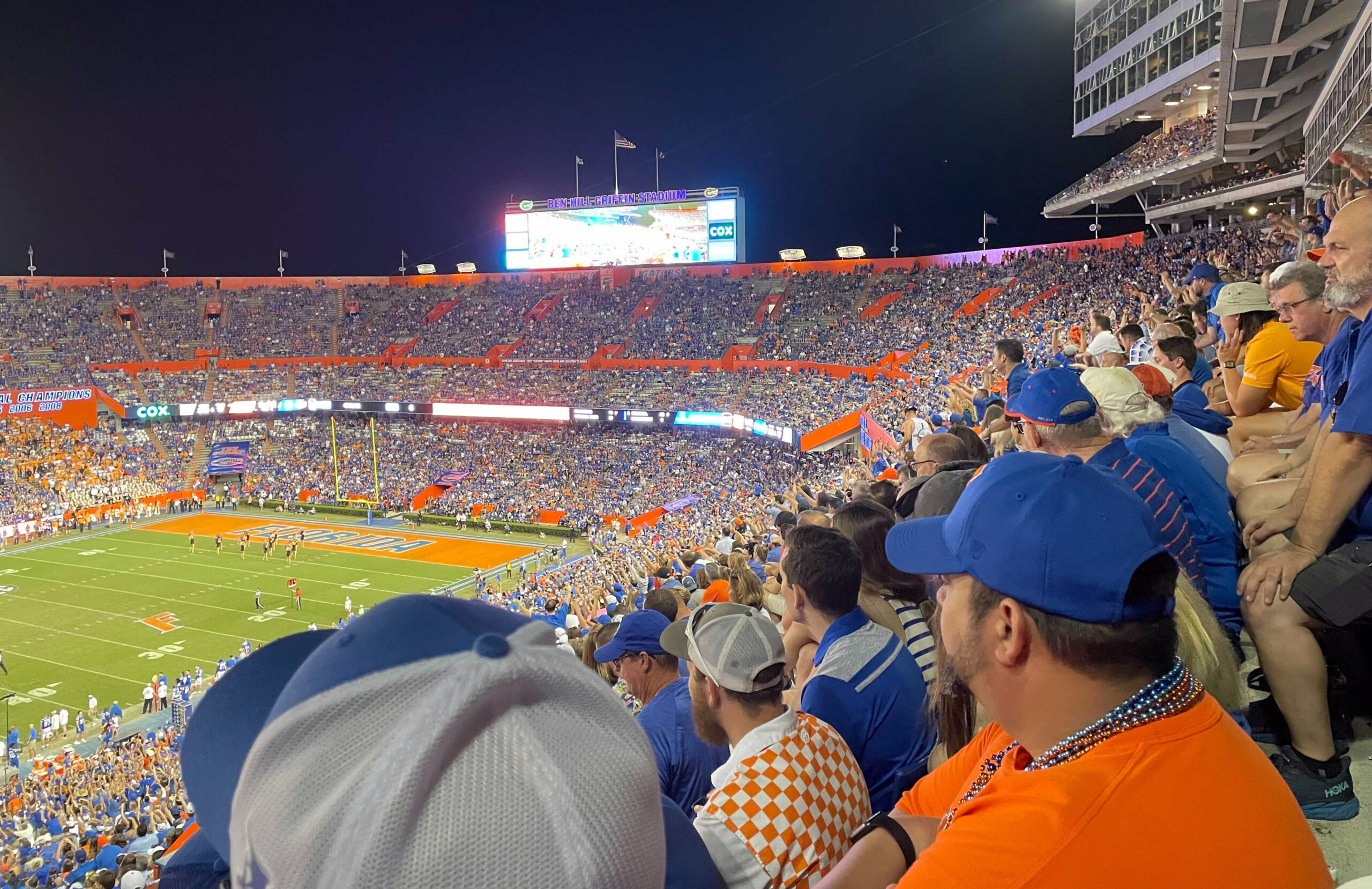 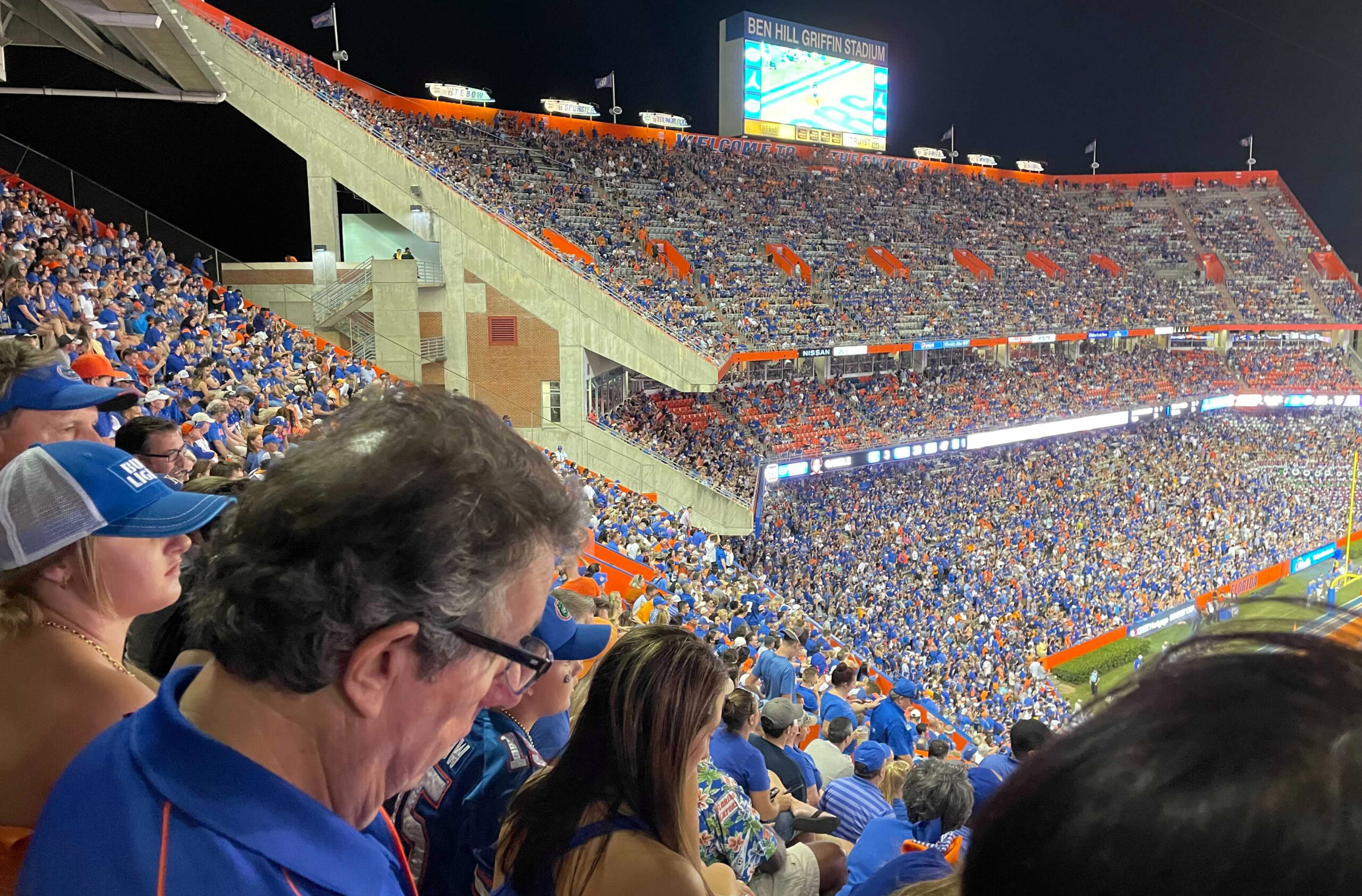 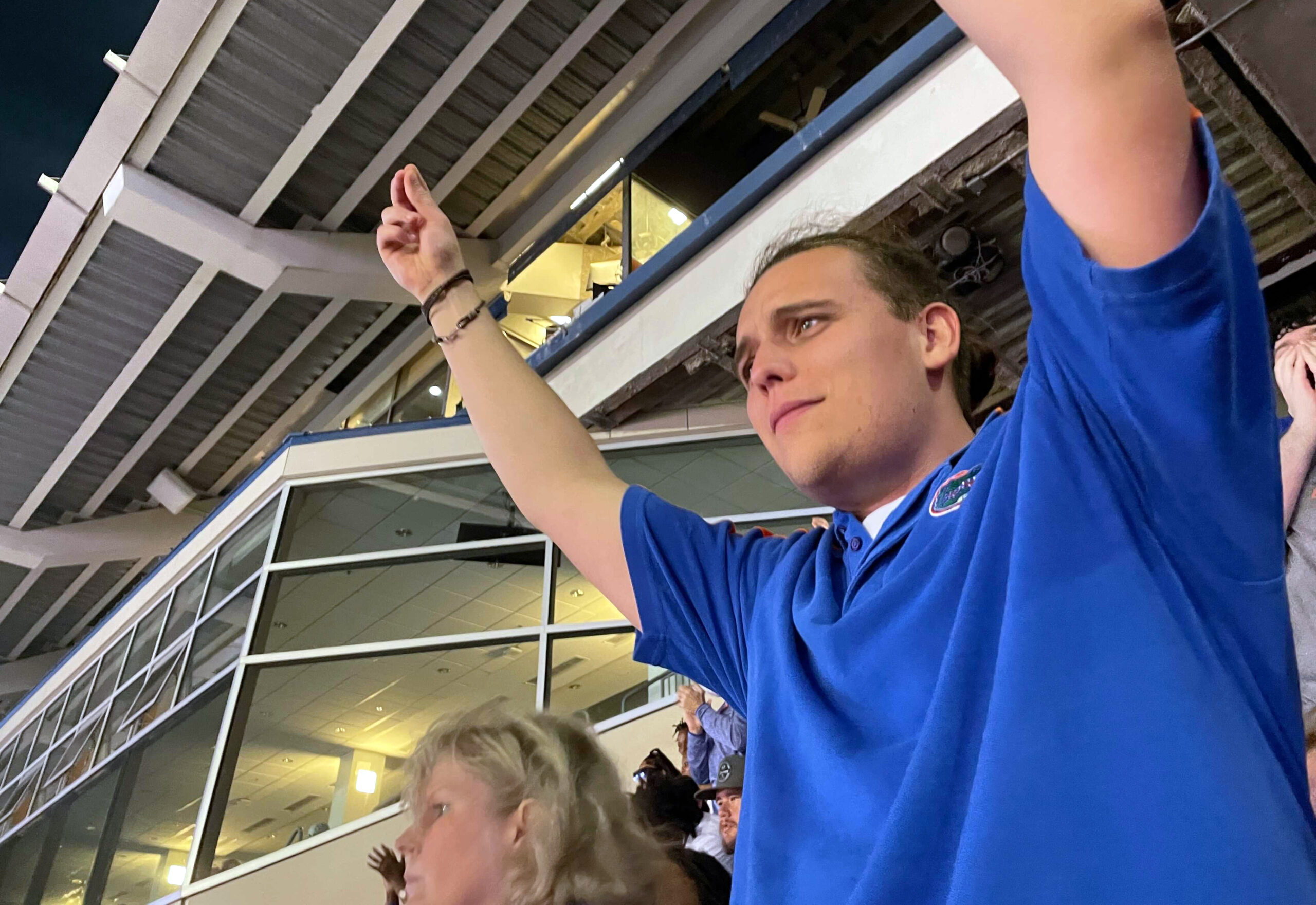 Elisabell Velázquez is a student journalist at the University of Florida and news reporter for WUFT and the Fresh Take Florida journalism program. She is bilingual, speaking Spanish and English. She enjoys covering all types of news, but especially investigative stories. Her work has been published by the Miami Herald, Orlando Sentinel, WUSF and The Alligator. She has been recognized for her work by the Society of Professional Journalists. You can reach Elisabell at [email protected] and on Twitter @elisabell_v.

previousLast Call for 10.7.21 — A prime-time read of what’s going down in Florida politics