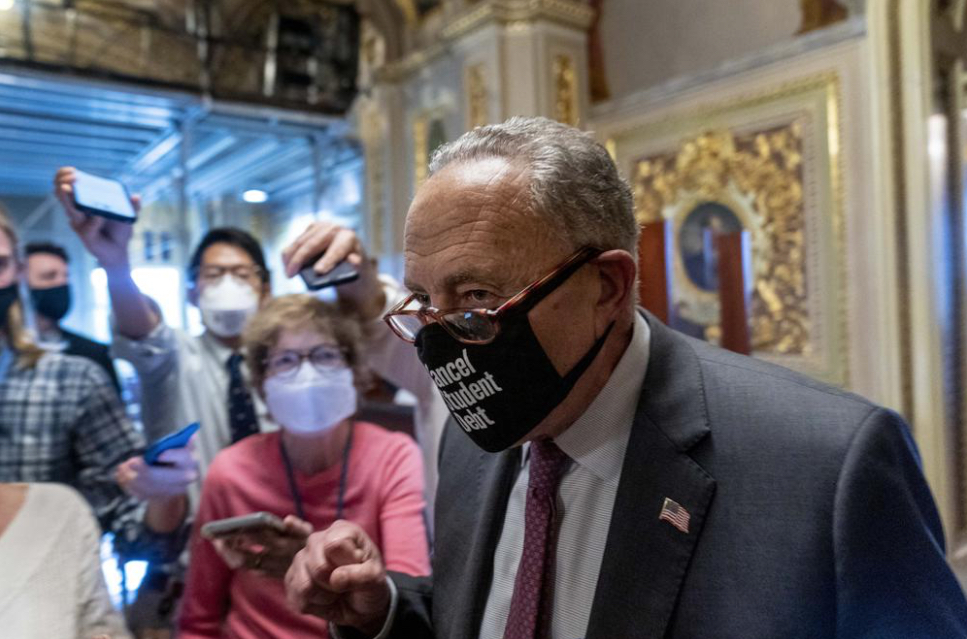 'We just can’t wait to the last minute to resolve this.'

“Our hope is to get this done as soon as today,” Schumer declared as he opened the Senate.

In their agreement, Republican and Democratic leaders edged back from a perilous standoff over lifting the nation’s borrowing cap, with Democratic senators accepting an offer from Senate GOP leader Mitch McConnell.

McConnell made the offer Wednesday shortly before Republicans were prepared to block longer-term legislation to suspend the debt limit and as President Joe Biden and business leaders ramped up their concerns that an unprecedented federal default would disrupt government payments to millions of people and throw the nation into recession.

The Senate leaders worked late into the night hammering out the details.

The agreement sets the stage for a sequel of sorts in December, when Congress will again face pressing deadlines to fund the government and raise the debt limit before heading home for the holidays.

“Basically, I’m glad that Mitch McConnell finally saw the light,” said Bernie Sanders, the independent senator from Vermont. The Republicans “have finally done the right thing and at least we now have another couple months in order to get a permanent solution.”

Sen. Chris Murphy, a Connecticut Democrat, added that, assuming final details in the emergency legislation are in order, “for the next three months, we’ll continue to make it clear that we are ready to continue to vote to pay our bills and Republicans aren’t.”

“This will moot Democrats’ excuses about the time crunch they created and give the unified Democratic government more than enough time to pass standalone debt limit legislation through reconciliation,” he said.

Congress has just days to act before the Oct. 18 deadline when the Treasury Department has warned it would quickly run short of funds to handle the nation’s already accrued debt load.

McConnell and Senate Republicans have insisted that Democrats would have to go it alone to raise the debt ceiling and allow the Treasury to renew its borrowing so that the country could meet its financial obligations. Further, McConnell has insisted that Democrats use the same cumbersome legislative process called reconciliation that they used to pass a $1.9 trillion COVID-19 relief bill and have been employing to try to pass Biden’s $3.5 trillion measure to boost safety net, health and environmental programs.

McConnell said in his offer Wednesday that Republicans would still insist that Democrats use the reconciliation process for a long-term debt limit extension. However, he said Republicans are willing to “assist in expediting” that process, and in the meantime Democrats may use the normal legislative process to pass a short-term debt limit extension with a fixed dollar amount to cover current spending levels into December.

While he continued to blame Democrats, his offer will also allow Republicans to avoid the condemnation they would have gotten from some quarters if a financial crisis were to occur.

Earlier Wednesday, Biden enlisted top business leaders to push for immediately suspending the debt limit, saying the approaching deadline created the risk of a historic default that would be like a “meteor” that could crush the economy and financial markets.

At a White House event, the president shamed Republican senators for threatening to filibuster any suspension of the $28.4 trillion cap on the government’s borrowing authority. He leaned into the credibility of corporate America — a group that has traditionally been aligned with the GOP on tax and regulatory issues — to drive home his point as the heads of Citi, JP Morgan Chase and Nasdaq gathered in person and virtually to say the debt limit must be lifted.

“It’s not right and it’s dangerous,” Biden said of the resistance by Senate Republicans.

His moves came amid talk that Democrats might try to change Senate filibuster rules to get around Republicans. But Sen. Joe Manchin, the West Virginia Democrat, reiterated his opposition to such a change Wednesday, likely taking it off the table for Democrats.

The business leaders echoed Biden’s points about needing to end the stalemate as soon as possible, though they sidestepped the partisan tensions in doing so. Each portrayed the debt limit as an avoidable crisis.

“We just can’t wait to the last minute to resolve this,” said Jane Fraser, CEO of the bank Citi. “We are, simply put, playing with fire right now, and our country has suffered so greatly over the last few years. The human and the economic cost of the pandemic has been wrenching, and we don’t need a catastrophe of our own making.”

Ahead of the White House meeting, the administration warned that if the borrowing limit isn’t extended, it could set off an international financial crisis the United States might not be able to manage.

“A default would send shock waves through global financial markets and would likely cause credit markets worldwide to freeze up and stock markets to plunge,” the White House Council of Economic Advisers said in a new report. “Employers around the world would likely have to begin laying off workers.”

The recession that could be triggered could be worse than the 2008 financial crisis because it would come as many nations are still struggling with the COVID-19 pandemic, the report said.

Once a routine matter, raising the debt limit has become politically treacherous over the past decade or more, used by Republicans, in particular, to rail against government spending and the rising debt load.