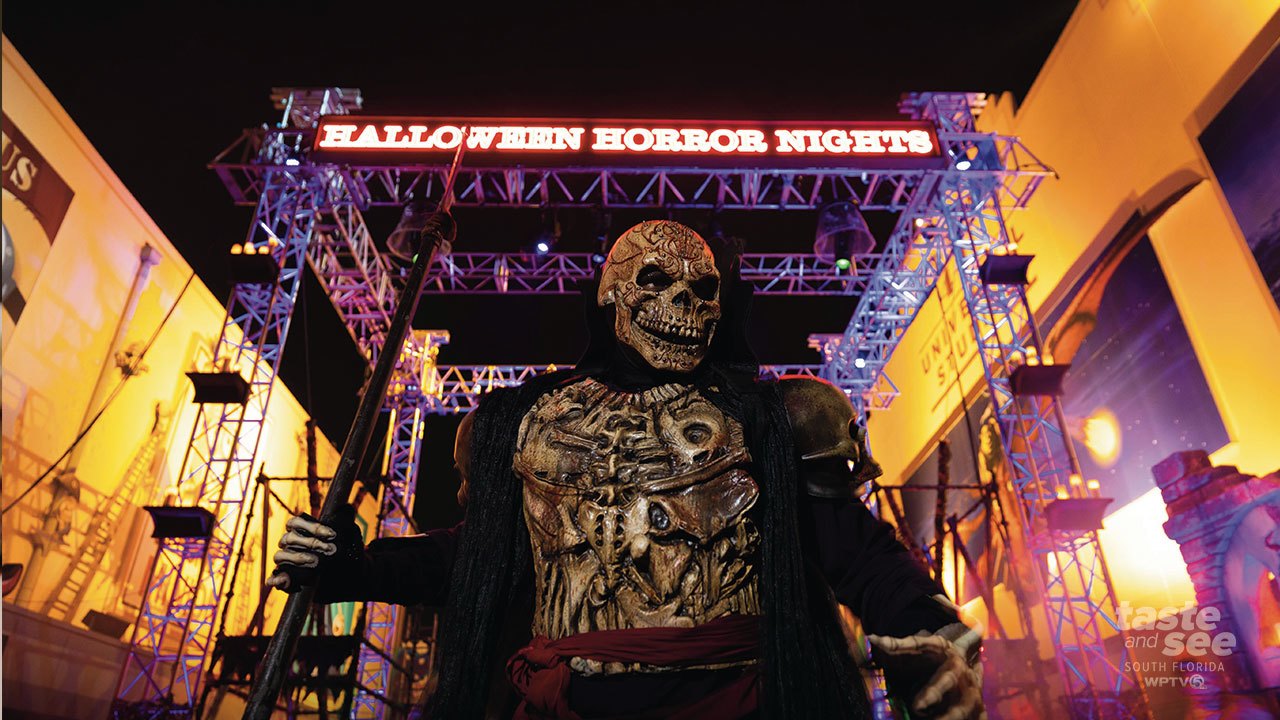 'We're in Florida so we're covered in sweat when we get done.'

On the event’s 30th anniversary, “We have more masks than we’ve ever had before,” said Charles Gray, the senior show director for Entertainment Creative Development at Universal Orlando Resort.

Working from a backstage building, Universal’s sculpting team created 95 new masks from scratch — about 35% more from 2019. (Universal also recreated another 46 masks from old molds from past years.)

They turned the clay into something terrifying, like a creature with multiple sets of eyes and a set of jaws that would make an alligator jealous. The fearsome look is a full-body one, too. Universal’s sculptors devised a bodysuit with creepy claws and a torso with even more eyes and teeth.

“The technology and printing has upped the game in the last few years,” Gray said. “We can print things on bodysuits that we weren’t able to do before.”

“We’re in Florida so we’re covered in sweat when we get done,” Gray said. But, “Safety first.”

Like almost everything at theme parks last year, COVID-19 ruined Universal’s plans. Instead of the full-fledged, big-scale Halloween production that Universal was known for, the park cut back and ran only two haunted houses in 2020.

Gray said that suddenly gave them time to reflect.

Planning any HHN is a massive undertaking. The haunted houses are elaborate enough to make you feel like you are in the middle of a scary movie. The event usually takes 15 months to plan, so when one HHN is underway, the team is already looking ahead to the next year.

In 2020, “It gave us the opportunity to kind of deep dive and actually think further into the future,” Gray said.

For HHN fan Barry Short, he appreciates Universal’s throwback to old characters and past houses returning for the 30th.

“Anniversary years have always been special for HHN. I think this one, they really pulled out all the stops. So many of the original houses really delve into HHN lore,” said Short, an editor at thrillgeek.com and co-host of ThrillGeek’s theme park podcast. “HHN is the premier Halloween event. Some would say in the world. Some would say in the United States.”

Universal isn’t commenting on the attendance figures but Gray said people were waiting outside the gates on opening night. Universal’s owner, Comcast, is scheduled to release the latest quarterly earnings later this month where executives will likely discuss the theme parks’ finances and big revenue generators.

HHN has been busy, said Short, who has attended about 10 nights so far this year.

“Considering there’s no international guests, that’s very impressive. I think that shows the pent-up demand after no (full-scale) event last year. Everyone was so excited for this year,” Short said.

Short has felt safe going during the pandemic, he said. He wears a mask inside the haunted houses which in most places have plexiglass barriers installed to separate visitors from the scareactors. The scare zones are outdoors which also makes Short feel more comfortable, he said.

Thirty years in, Universal is a pro when it comes to HHN. That doesn’t mean Universal is constantly changing up the haunted houses and scare zones to figure out how to get it just right even though the countdown to Halloween has already begun.

Are there enough strobe lights? Is a scareactor scarier outside or inside the haunted house? (For one adjustment, Universal stuck a character outside before the sun went down and then moved him the “Welcome to Scarey” haunted house at night.)

“We’re always just tweaking here and there … So the opening night is different than the final night,” Gray said, joking, “I’m sure the production teams are like, ‘Stop spending our money!’”

“These are little things that we do throughout the event. To those who come night after night, they’ll see these little differences as they go through.”