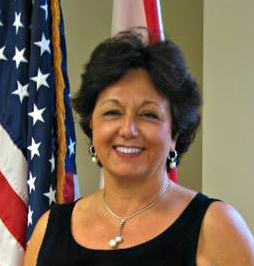 The Naples Republican will hold the gavel next year if the GOP still controls the chamber.

Sen. Kathleen Passidomo, a Naples Republican, was officially selected by the Senate GOP Caucus as the incoming president officer for the Florida Legislature’s upper chamber.

“Doing what is right and what is in the best interest of our state is not always easy,” Passidomo said. “But no one takes on a job like this because they think it will be easy. It’s hard work to balance the priorities of our state, meet the needs of our residents and preserve and protect what makes Florida so special.”

“Creating good policy is what we’re about, and it’s what Kathleen Passidomo is about,” Harrell said.

She pointed to Passidomo’s history crafting legislation on protecting seniors. But she also said her colleague has the political capacity to advance an agenda, including working across the aisle.

Senate Republican Leader Debbie Mayfield, an Indialantic Republican, seconded the motion, and focused her remarks on Passidomo’s personal story as a professional balancing the demands of work with raising a family.

“As senators, we have also enjoyed Kathleen’s food over the years,” Mayfield said. “One cannot pass up her lasagna or her famous meatballs.”

Senators from both parties attended, though the GOP caucus made the selection. Other dignitaries at the ceremony included Gov. Ron DeSantis, Lt. Gov. Jeanette Nunez, Attorney General Ashley Moody and Chief Financial Officer Jimmy Patronis. Former Senate Presidents Tom Lee, Jeff Atwater and Mike Haridopolos made the trip for the ceremony as well, as did House Speaker Chris Sprowls and Speaker-Designate Paul Renner.

That assumes Republicans maintain a majority in 2020, when all 40 Senate districts will be redrawn based on current Census data and hold an election. The GOP holds a 24-16 majority over Democrats now.

While a ceremony formally put Passidomo in line to seize the gavel in November 2022, the race for Senate President was decided some time ago. After a low-key competition with Sen. Travis Hutson, a St. Augustine Republican, Passidomo secured enough votes last November for the job. She served at the time as Senate Republican Leader.

Today, she’s the Senate Rules Committee chair. She first won election to the Senate in 2016, and before that served in the House from 2010 to 2016. Passidomo, before public service, became only the second woman to practice law professionally in Collier County.

Of note, Passidomo would be the first female Senate President since Toni Jennings served two terms from 1996 to 2000. She will be the second Republican woman to lead the chamber, after Jennings, and the third woman ever. The first, the late Democrat Gwen Margolis, took the gavel in 1991.

Passidomo made mention of Jennings, who could not attend but loaned a liberty eagle pin that Passidomo wore to the ceremony. The same pin appears in Jennings’ Senate President portrait hanging in the chamber. “I’m proud to honor President Jennings and join the ranks of the women leaders who have worn this symbol before me. I also want to thank President Jennings for her words of wisdom to me over the last several months. I’m honored that she is willing to share her perspective on her role as Senate President more than 20 years ago.”

Senate First Gentleman-to-be John Passidomo attended the event by his wife’s side.

In the event Democrats pull an upset in the midterms and take the chamber, Democratic Leader Lauren Book of Plantation would become Senate President after the election instead.

Passidomo, of course, intends to preside. But she also praised Book as a leader and committed to working together. “We came to the Senate together in 2016 and have built a strong relationship over the years,” Passidomo said. “I am looking forward to working with you and the members of your Democratic caucus.”

She praised DeSantis’ leadership if keeping the state largely open over the 18 months of the pandemic.

As far as her personal agenda, Passidomo voiced a continued commitment to assisting veterans and protetcting seniors. “Florida is: full of jobs and opportunity; the “go to” state for business relocation; a preeminent tourist destination; home to 20 major military installations and the most veteran friendly state in the nation; where students can get an excellent education and the opportunity for school choice; where homes and business can depend on affordable and reliable power; and where families can access high quality health care,” she said.

Passidomo took a swing westward and suggested Florida could prosper as liberal California became a land of “dying dreams.”

“in California, something went terribly wrong. No one fought to protect the California Dream. No one balanced the priorities of the state and worked to meet the needs of its residents, while preserving and protecting what made it special,” she said. “Here in Florida, the Florida Dream is alive and well. But we cannot take that for granted. We have to fight for the Florida Dream. We must foster economic growth so that there are jobs and opportunity. We must continue to strengthen our schools, colleges and universities, and the choices for families to pursue when it comes to education, so that our students have the knowledge and skills they need to succeed.”