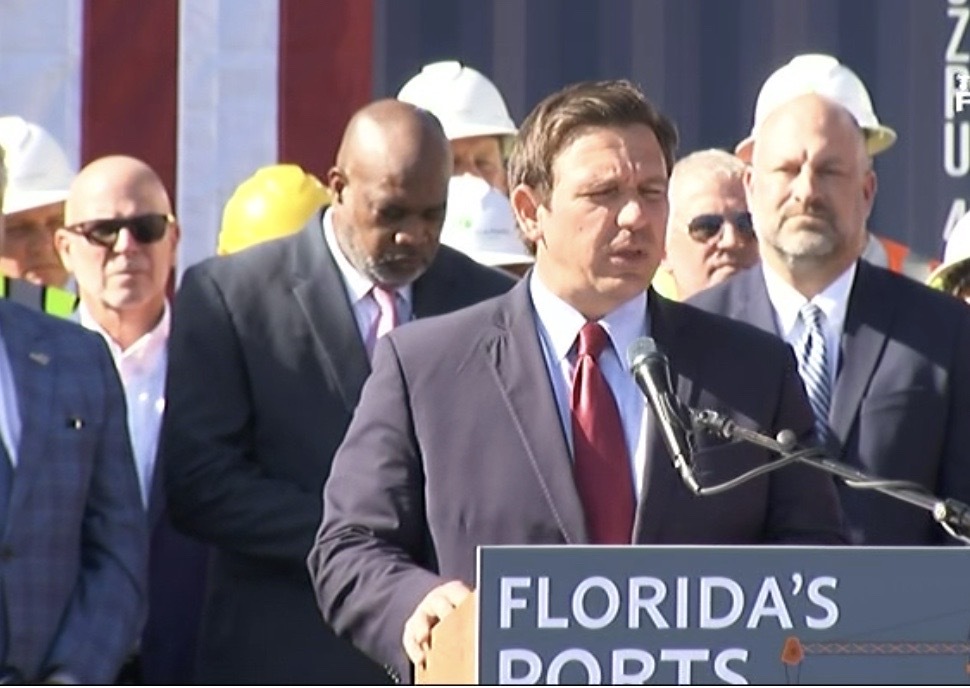 At JAXPORT Tuesday, Gov. Ron DeSantis said Florida ports have the capacity and the staffing to handle the imports currently offshore on the West Coast and even eastern ports such as Savannah.

“We are going to make sure Americans get their Christmas gifts this season,” DeSantis said.

DeSantis has spent much of the last week bashing President Joe Biden, the so-called “Grinch who stole Christmas.” The Governor expressed concerns about everything from kids not getting toys this year to the need to reshore production of medical supplies from China, teasing a fix in the works.

DeSantis joked that “last-minute shoppers” like him would be especially impacted if the supply chain woes continue.

On Tuesday, the rollout was complete with a sign proclaiming “Florida’s ports are open.” And the location was no accident. Hapag-Lloyd added JAXPORT to its European loop this week. The city joins Charleston, South Carolina, and Norfolk, Virginia, in the mix.

“We are facing major disruptions in the supply chain. You’ve seen the images of all these ships,” DeSantis said, describing “empty shelves” and “increased costs” including the highest year over year food price increase in 10 years.

“We in Florida have the ability to help alleviate these logjams and ameliorate these problems with the supply chain,” DeSantis said, noting that he has funded ports so they can handle these challenges. “It really is, I think, a model for the rest of the country.”

Ports including JAXPORT, as well as Port Everglades, Port Tampa Bay and Port Panama City have capacity. Some are going to offer incentives to businesses to try them out as a workaround to “logistical problems,” DeSantis said.

Civic boosters long sought to expand JAXPORT, noting that proximity to rail access and two major interstates was a unique value add. Starting during the Gov. Rick Scott administration, the St. Johns River has been dredged to 47 feet in recent years, a project finally slated to end next year.

That project was sold on increased traffic, specifically super-containers of the sort that other ports more easily could handle than Jacksonville. JAXPORT is already the largest container port by volume in Florida and still has no container vessels waiting for offload.

Now, in a moment of national crisis, capacity at JAXPORT and elsewhere in the state may come in handy. For DeSantis, eternally contrasting himself to the President, the opportunity proved to be irresistible.

Those on hand extolled the Governor’s forward thinking move.

“The Governor has displayed tremendous leadership in continuing to recognize the value our seaports provide in meeting the mission of safely moving goods throughout the region,” said Florida Department of Transportation Secretary Kevin J. Thibault. “The partnership we have with our deepwater seaports uniquely positions Florida to be that much needed destination to get goods to market and overcome the delays seen at other locations.”