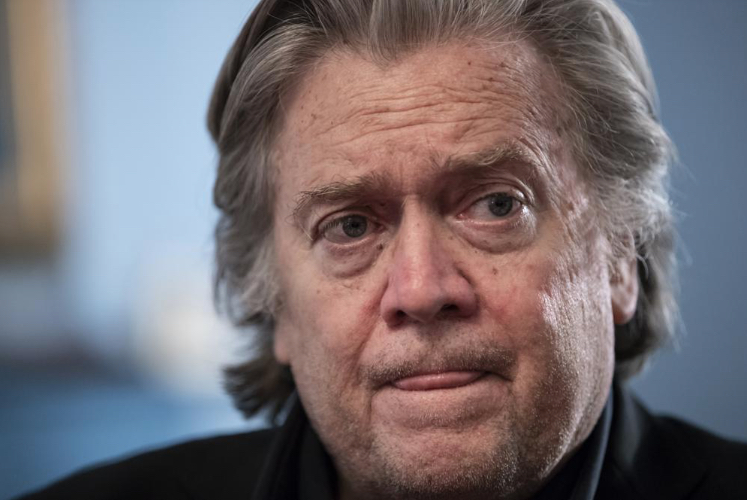 It could be up to Merrick Garland, who's vowed to depoliticize Justice.

The U.S. House is expected to hold Steve Bannon in contempt of Congress Thursday. It’s up to the Justice Department, and the courts, to determine what happens next.

As lawmakers ready a Thursday vote to send a contempt referral to the U.S. attorney’s office in Washington, there’s considerable uncertainty about whether the Justice Department will prosecute Bannon for refusing to cooperate with the investigation into the Jan. 6 insurrection, despite Democratic demands for action.

The outcome could determine not only the effectiveness of the House investigation, but the strength of Congress’ power to call witnesses and demand information — factors that will certainly be weighing on Justice officials as they determine whether to move forward. While the department has historically been reticent to use its prosecution power against witnesses found in contempt of Congress, the circumstances are exceptional as lawmakers investigate the worst attack on the U.S. Capitol in two centuries.

Still, prosecution is not a given. Assuming his post after a turbulent Trump era, Attorney General Merrick Garland has prioritized restoring what he has called “the norms” of the department. On his first day, he told rank-and-file prosecutors that they should be focused on equal justice and not feel pressure to protect the president’s allies or to attack his enemies. He has repeatedly said political considerations shouldn’t play a role in any decisions.

And his deputies pushed back — hard — when President Joe Biden suggested to reporters last week that Bannon should be prosecuted for contempt.

“The Department of Justice will make its own independent decisions in all prosecutions based solely on the facts and the law. Period. Full stop,” Garland’s spokesman, Anthony Coley, said on Friday, in response to the president’s comments.

The Jan. 6 panel voted Tuesday evening to recommend the contempt charges against Bannon, citing reports that he spoke with Trump before the insurrection, promoted the protests that day and predicted there would be unrest. Members said Bannon was alone in completely defying his subpoena, while more than a dozen other witnesses were at least speaking to the panel.

If the full House votes to hold Bannon in contempt on Thursday, as expected, the matter will be referred to the U.S. attorney’s office in Washington. It would then be up to prosecutors in that office whether to present the case to a grand jury for possible criminal charges. The office is run by Channing Phillips, an acting U.S. attorney who had previously served in the position in the Obama administration. Another attorney, Matt Graves, has been nominated for the post, but his nomination is pending in the Senate.

“If the House of Representatives certifies a criminal contempt citation, the Department of Justice, as with all criminal referrals, will evaluate the matter based on the facts and the law, consistent with the Principles of Federal Prosecution,” said Bill Miller, a spokesman for the U.S. attorney’s office in Washington.

The Justice Department has in the past been wary of prosecuting congressional contempt cases, especially when the White House and the House of Representatives are controlled by opposing political parties.

In addition, the Justice Department’s Office of Legal Counsel has said in multiple opinions — including one from the 1980s involving Anne Gorsuch, the mother of Supreme Court Justice Neil Gorsuch, who refused to turn over documents in her capacity as administrator of the Environmental Protection Agency — that the Justice Department has discretion on when to prosecute for contempt, even when receiving a referral from the House.

Still, the Bannon case is different, as Democrats hold both Congress and the White House — and because the committee is investigating a violent insurrection of Trump’s supporters who beat law enforcement officers, broke into the Capitol and interrupted the certification of Biden’s victory.

“What we’re talking about is this massive, violent assault on American democracy,” Raskin said.

Thomas Spulak, a former Democratic counsel to the House, said there are arguments that could be made for and against a Justice Department prosecution. On one hand, he said, “Some have suggested that perhaps this Justice Department doesn’t want to get caught up in a continuation in the saga that went on in the last administration over subpoenas with the House.”

But, given the severity and historic nature of Jan. 6, “This is a significant matter for the House and the House is going to press this very hard — and it might be difficult for the administration to not act on it.”

Even if the department does decide to prosecute, the case could take years to play out — potentially pushing past the 2022 election when Republicans could win control of the House and end the investigation.

And if they don’t prosecute, then the House will likely find another route. A House-authorized civil lawsuit could also take years, but force Bannon and any other witnesses to defend themselves in court.

Another option available to Congress would be to try to imprison witnesses who defy them — an unlikely, if not outlandish, scenario. Called “inherent contempt,” the process was used in the country’s early years but hasn’t been employed in almost a century.

House Intelligence Committee Chairman Adam Schiff, another member of the panel, says if Justice prosecutes the case it will have “a vigorous effect in terms of other potential witnesses’ willingness to cooperate” or face consequences.

“I think the criminal justice system, when it has a mind to, can move very quickly,” Schiff said. “And we hope that it will.”