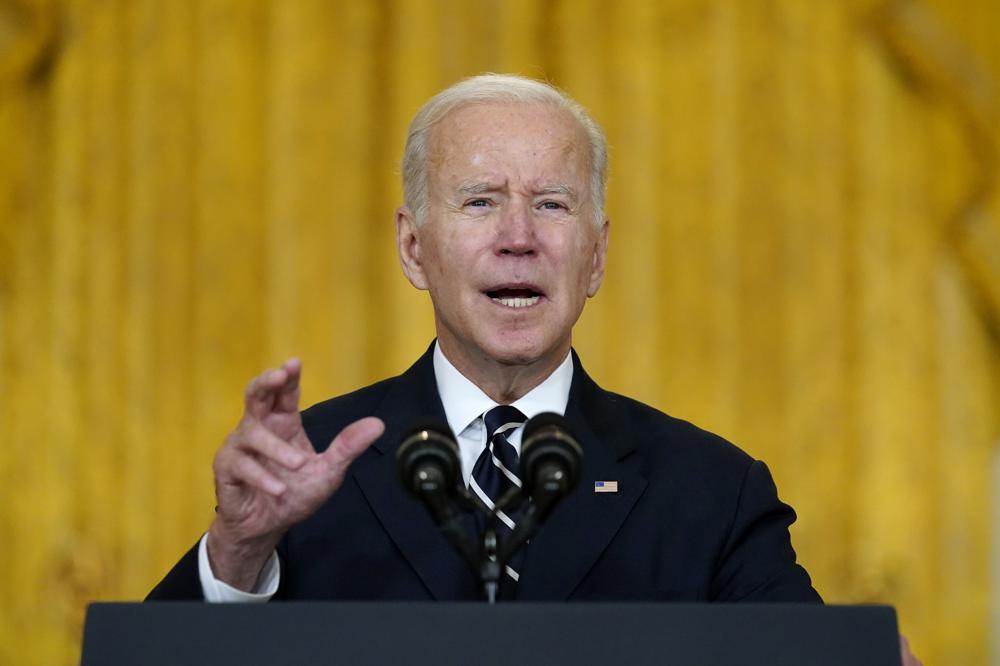 President Joe Biden declared Thursday he has reached a “historic economic framework” with Democrats in Congress on his sweeping domestic policy package, a hard-fought yet dramatically scaled-back deal announced just before he departs for overseas summits.

Biden’s remarks at the White House came after he traveled to Capitol Hill to make the case to House Democrats for the still robust domestic package — $1.75 trillion of social services and climate change programs the White House believes can pass the 50-50 Senate.

“It will fundamentally change the lives of millions of people for the better,” Biden said at the White House. “Let’s get this done.”

Together with a nearly $1 trillion bipartisan infrastructure bill heading for final votes possibly as soon as Thursday, Biden claimed a domestic achievement modeled on those of Franklin Roosevelt and Lyndon Johnson.

“I need your votes,” Biden told the lawmakers earlier, according to a person who requested anonymity to discuss the private remarks.

Biden was eager to have a deal in hand before departing later in the day for global summits. But the revised package has lost some of the Democrats’ top priorities as the president’s ambitions make way for the political realities of the narrowly divided Congress.

Paid family leave and efforts to lower prescription drug pricing are now gone entirely from the package, drawing outrage from some lawmakers and advocacy groups.

Still in the mix, a long list of other priorities: Free prekindergarten for all youngsters, expanded health care programs — including the launch of a $35 billion new hearing aid benefit for people with Medicare — and $555 billion to tackle climate change.

There’s also a one-year extension of a child care tax credit that was put in place during the COVID-19 rescue and new child care subsidies. An additional $100 billion to bolster the immigration and border processing system could boost the overall package to $1.85 trillion if it clears Senate rules.

With support for even the narrowed package still an issue, Biden said as he left the Capitol, “I think we’re going to be in good shape.”

At least one pivotal holdout, Arizona Democratic Sen. Kyrsten Sinema, struck a similar tone: “I look forward to getting this done.”

However, another holdout, West Virginia Democratic Sen. Joe Manchin, was less committal: “This is all in the hands of the House right now.”

Taking form after months of negotiations, Biden’s emerging bill would still be among the most sweeping of its kind in a generation, modeled on New Deal and Great Society programs. The White House calls it the largest-ever investment in climate change and the biggest improvement to the nation’s healthcare system in more than a decade.

In his meeting with lawmakers at the Capitol, Biden said he wanted progress in hand when he arrives in Rome for a global summit to show world leaders, including those in Russia and China, that democracies still work, according to those attending the private meeting.

“We are at an inflection point,” Biden said. “The rest of the world wonders whether we can function.”

And he said it’s not “hyperbole to say that the House and Senate majorities and my presidency will be determined by what happens in the next week.”

At one point, Biden “asked for a spirited enthusiastic vote on his plan,” said Rep. Richard Neal, a Massachusetts Democrat.

Twice over the course of the hour-long meeting Democratic lawmakers rose to their feet and started yelling: “Vote, vote, vote,” said Rep. Gerald Connolly of Virginia.

Biden’s proposal would be paid for by imposing a new 5% surtax on income over $10 million a year and instituting a new 15% corporate minimum tax, keeping with his plans to have no new taxes on those earning less than $400,000 a year, officials said.

Revenue to help pay for the package would also come from rolling back some of the Trump administration’s 2017 tax cuts, along with stepped-up enforcement of tax-dodgers by the IRS. Biden has vowed to cover the entire cost of the plan, ensuring it does not pile onto the debt load.

But the framework is not yet the full legislative text, which lawmakers and aides cautioned has not yet been agreed to by the lawmakers.

Rep. Pramila Jayapal, a Washington Democrat, the progressive caucus leader, said unveiling the new framework “will show tremendous momentum. But we want to see the actual text because we don’t want any confusion and misunderstandings.”

House Speaker Nancy Pelosi said Biden asked the House to vote Thursday. Pending was the related $1 trillion infrastructure bill that already cleared the Senate but became tangled in deliberations over the broader bill.

Progressives have been withholding their support for the smaller bipartisan infrastructure bill as leverage until they have a commitment on an agreement for the broader Biden package they prefer. That separate $1 trillion infrastructure bill of road, broadband and other public works projects faces a Sunday deadline for a vote, when routine transportation funds risk expiring.

“When the president gets off that plane we want him to have a vote of confidence from this Congress,” Pelosi told lawmakers, the person said.

In the divided Senate, Biden needs all Democrats’ support with no votes to spare. The House is also split with just a few vote margin.

Two key Democratic holdouts, Manchin and Sinema, have almost single-handedly reduced the size and scope of their party’s big vision.

Sinema has been instrumental in pushing her party off a promise to undo the Republicans’ 2017 tax cuts, forcing Democrats to take a different approach from simply raising top rates on individuals and corporations.

And Manchin’s resistance to government programs forced serious cutbacks to a clean energy plan and the outright elimination of paid family leave. His insisted there be work requirements for parents receiving the new child care subsidies.

The two Democratic senators who now hold enormous power, essentially deciding whether or not Biden will be able to deliver on the Democrats’ major campaign promises.

At the same time, progressives achieved one key priority — Vermont Independent Bernie Sanders’ proposal to provide hearing aid benefits for people on Medicare. However, his ideas to also include dental and vision care were left out.

Other expanded health care programs build on the Affordable Care Act by funding subsidies to help people buy insurance policies and coverage in states that declined the Obamacare program.

Overall, the new package also sets up political battles in future years. Much of the health care funding will expire in 2025, ensuring a campaign issue ahead of the next presidential election. The child care tax credit expires alongside next year’s midterm elections, when control of Congress will be determined.

Despite a series of deadlines, Democrats have been unable to close the deal among themselves, and Republicans overwhelmingly oppose the package. At best, Democrats could send Biden overseas with a deal in hand and unlock the process while the final details were sewn up.

previousGov. DeSantis defends Surgeon General: 'I think they're trying to politicize this'

nextFuture of Florida Forum: Ron DeSantis says Florida is ‘the freest state’ — and businesses are noticing