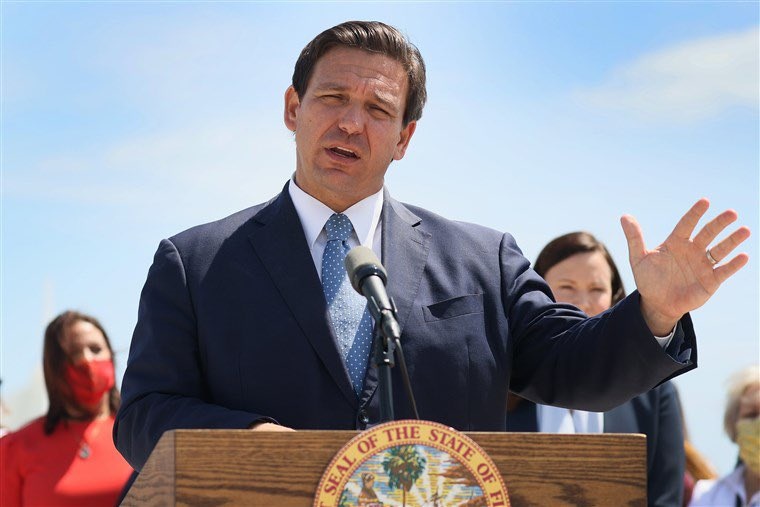 Gov. Ron DeSantis blasted reports that the federal government may pay $450,000 per person to those separated from their families at the U.S./Mexican border, calling the proposed payouts a “slap in the face” to American citizens.

“I’ve seen a lot in my day. I’ve seen a lot that’s happened in the last nine or ten months that I never thought I’d see. But this takes the cake. If that is done, that is going to be a slap in the face to every hard-working American,” DeSantis said Friday in Lake County.

The Governor said he was “very, very concerned about reports, I think it was in the Wall Street Journal, that the Biden administration is going to pay with tax dollars hundreds of millions of dollars to people who came to our country illegally across the southern border as ‘damages.'”

The American Civil Liberties Union filed a class-action lawsuit in 2019 on behalf of people separated from their families during the Donald Trump administration, and the move appears to be for settlement with aggrieved parties. If a parent and a child were separated, each could receive the $450,000 compensation from the U.S. Departments of Justice, Homeland Security and Health and Human Services.

NBC News reports 5,600 children were separated from parents during the Trump era, with 1,000 families still separated.

The deal is still being negotiated by the Justice Department, but DeSantis denotes the irony of compensation for non-citizens while Americans suffer economically.

Though an ACLU lawyer says the punitive policy “deliberately traumatized” these families, for DeSantis that issue seems more ancillary.

“It’ll especially be a slap in the face to people that have immigrated legally to this country,” DeSantis adds. “That should not be allowed to stand. It’s wrong and whatever we can do in Florida to fight back against it, we will do.”

It is uncertain what Florida can do to intervene in federal payouts over civil rights violations.

DeSantis, addressing the International Boatbuilders Exhibition in September, suggested it was a “good sign” that men aren’t going to college as much as women because they are shunning traditional higher education for trades.

“There was actually an article in The Wall Street Journal recently about, you know, decline in college for men, or something,” DeSantis continued, deepening his voice briefly for comic effect to introduce the article highlighting that three in five college students are now women, with men feeling “lost.”

“I guess there was a decline in the number of men, the percentage of men going to college or whatever. And they acted like this was a bad thing. And honestly, like, you know, to me, I think that is probably a good sign,” added the Governor, who has two degrees from IVY League universities, Harvard and Yale.

“Because I think people are looking at this and they’re acknowledging, you know, some of these universities are not giving you very much for your money. You’re not necessarily going to get ahead in that.”