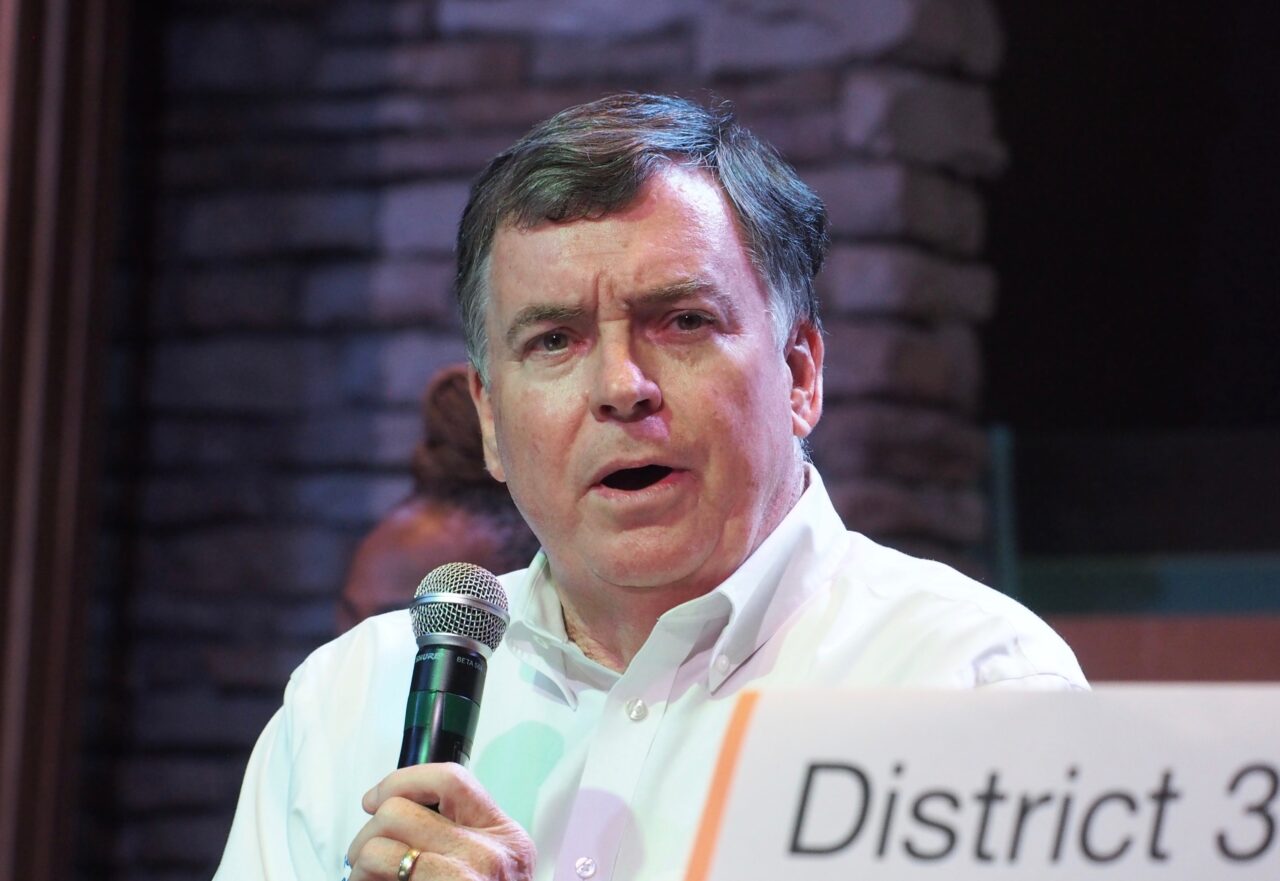 Stuart's campaign touts his decades of public service in a volley of mailers.

Orlando City Commissioner Robert Stuart is running for a fifth term, and he’s touting a mileslong resume as the three-way election approaches.

Stuart is a known quantity in The City Beautiful. In addition to his 15 years on the City Council, Stuart spent a quarter-century as executive director of the Christian Service Center, which has a full slate of programs designed to assist Central Florida residents from all walks of life across three locations in Downtown Orlando, West Orange County and Winter Park

The latest program in its arsenal is Love Pantry, created to provide pantry and hygiene items to families through Orange and Seminole county schools. It has served nearly 100 schools and provided more than 1,000,000 meals since it launched a decade ago.

His experience in the nonprofit and community service space has allowed him to forge coalitions of concerned citizens across the greater Orlando area to tackle problems ranging from homeless and poverty to education and transportation issues.

Stuart, an Orlando native, is a small-business man whose family has run an office supply business since 1938. He spent nearly 20 years helping lead the company, during which time he launched Stuart Commercial Interiors and trained a professional sales team to offer office machines and furniture in Central Florida.

In 2019, Stuart was the only non-mayoral official from any regional municipality included in Florida Politics’ list of Central Florida’s Most Powerful Politicians.

The UF alum and staunch home-rule advocate got his first taste of City politics came when former Orlando Mayor Glenda Hood appointed him to the Mayor’s Working Committee on Homelessness. He also served on the initial task force for Orange County’s Council on Aging. Current Mayor Buddy Dyer asked him to stay on the committee after he succeeded in the mid-aughts.

Stuart was first elected to the Commission in 2006, and was subsequently reelected in 2010, 2014, and 2017. He faces challengers Samuel Chambers and Nicolette Springer as he angles for a fifth term in the Nov. 2 General Election.

With Election Day approaching, his campaign has launched a volley of mailers trumpeting his accomplishments — and the endorsements they’ve earned him on both sides of the aisle.

Both mailers directed at partisan voters note endorsements from police and firefighter unions, which are also carved out into their own piece.

Perhaps the best summation of his campaign strategy comes via a mailer directed at the electorate at-large: “It’s rare when Democrats and Republicans agree. But when it comes to Orlando City Commission candidates, they agree on Robert Stuart.”

The last of the lot features a half-dozen news clippings on accolades the city has received during Stuart’s tenure on the Commission, such as the city’s recognitions for strides it has made on inclusivity and economic development.

“This doesn’t happen by accident,” the mailer states. “Keep Orlando on the right track. Keep Robert Stuart our city commissioner.”

District 3 covers an area including Audubon Park, Baldwin Park, College Park and Rosemont. Election Day is Nov. 2. If no candidate earns a majority of the vote, a run-off between the top-two vote-getters will be held on Nov. 7.

Stuart’s mailers are below. 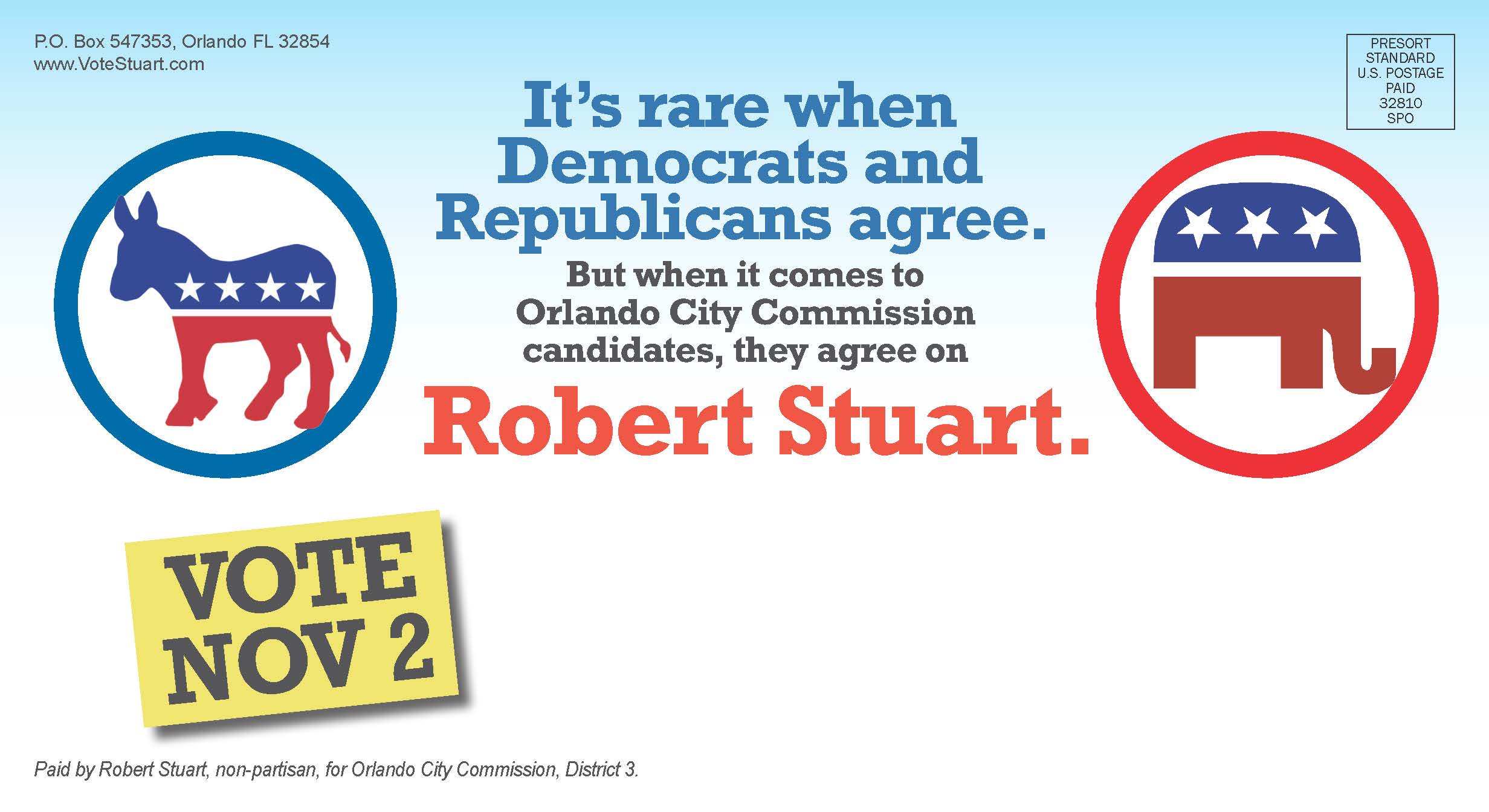 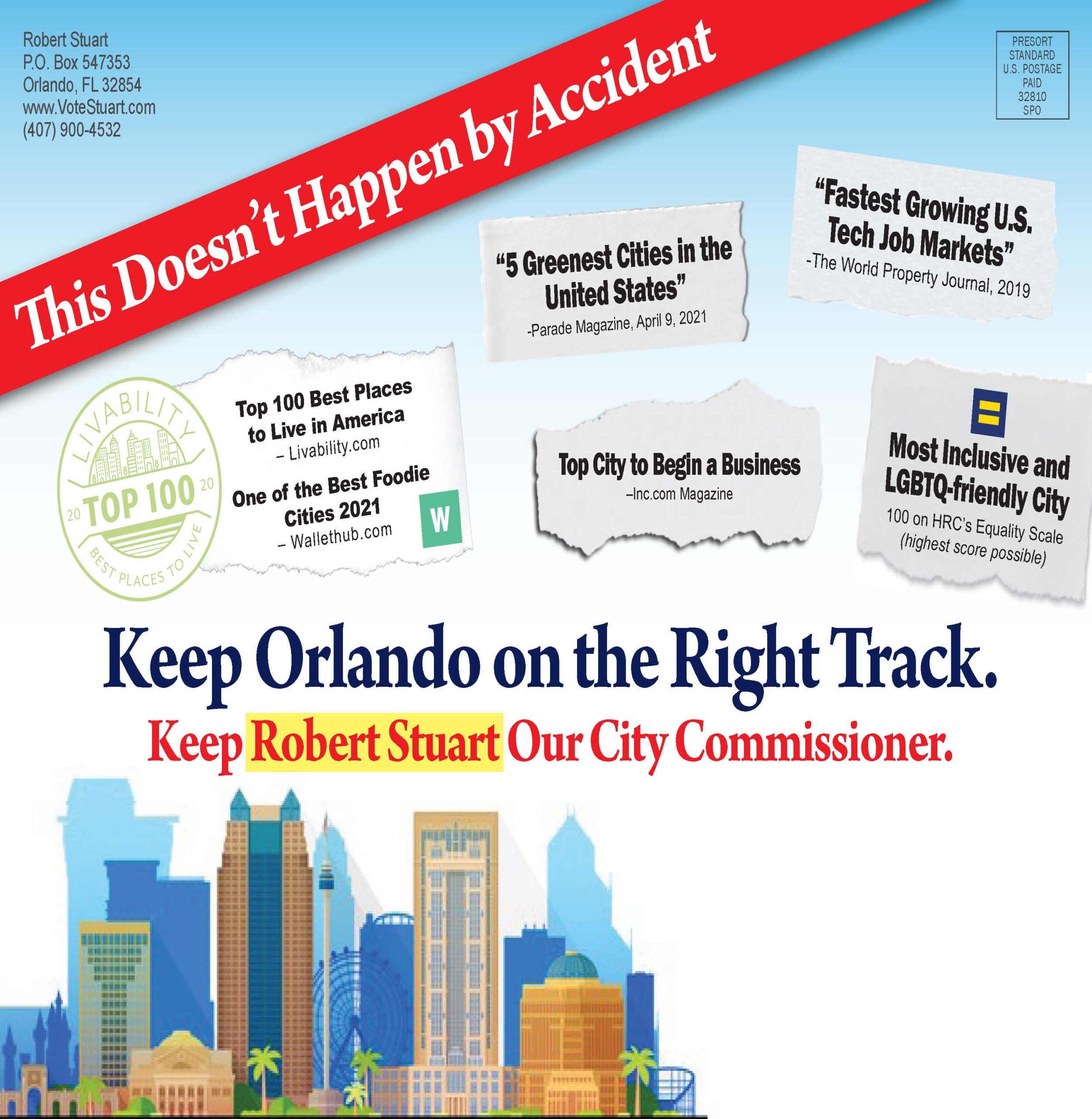 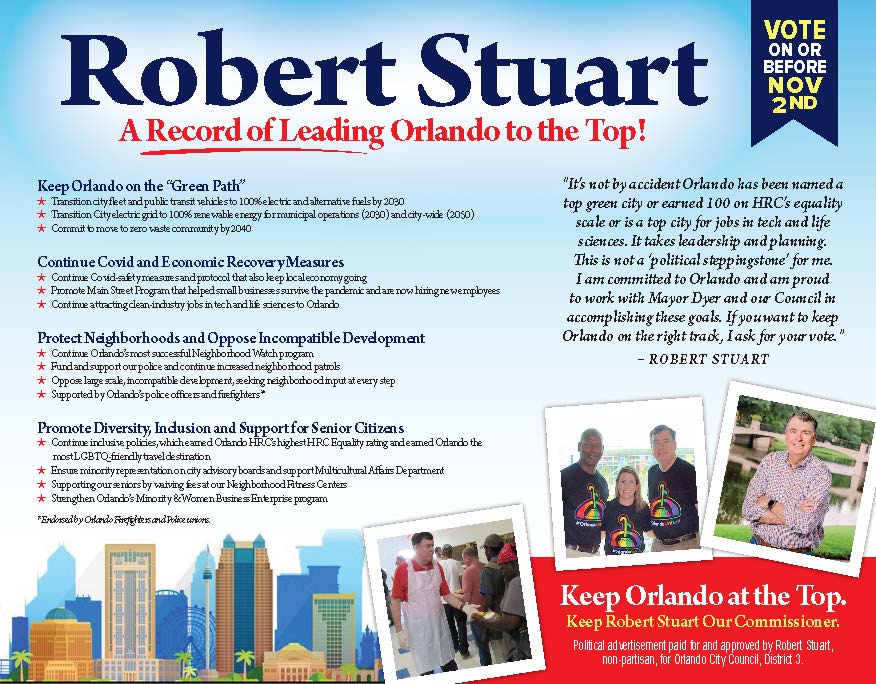 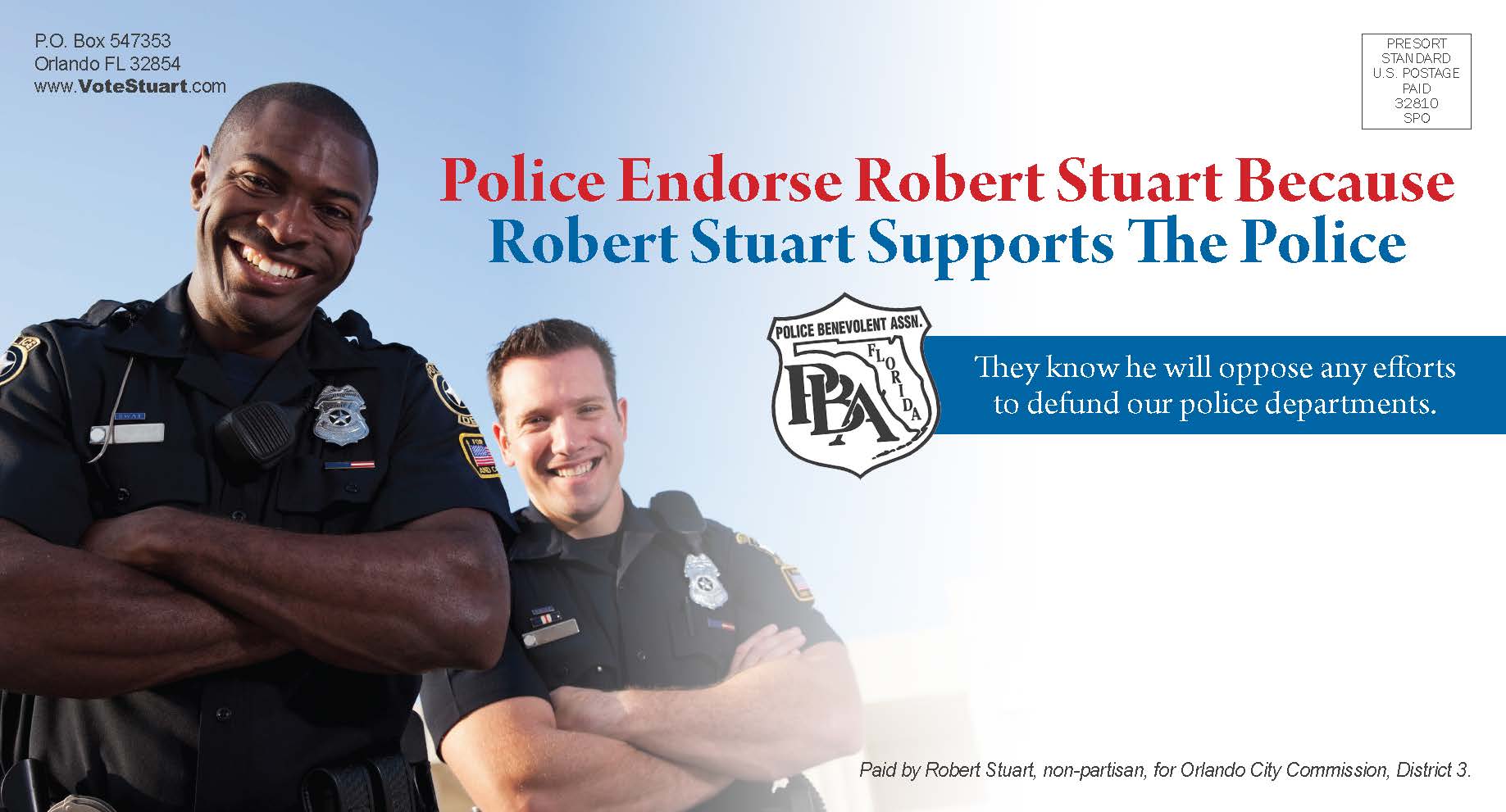 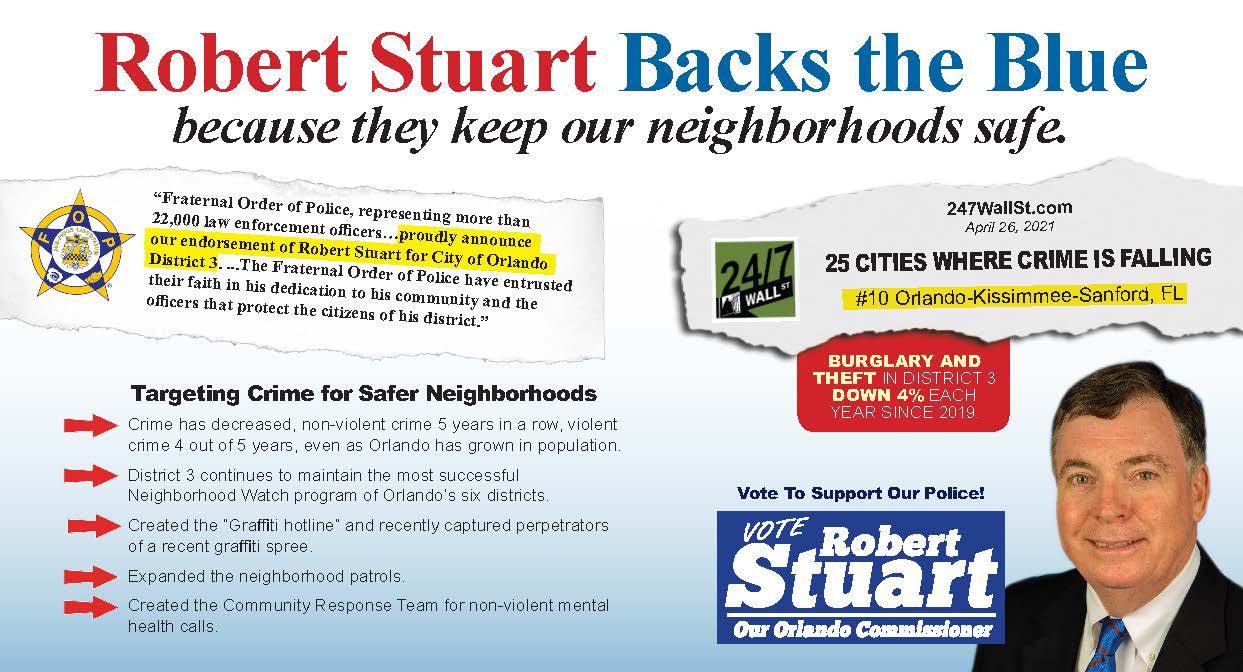 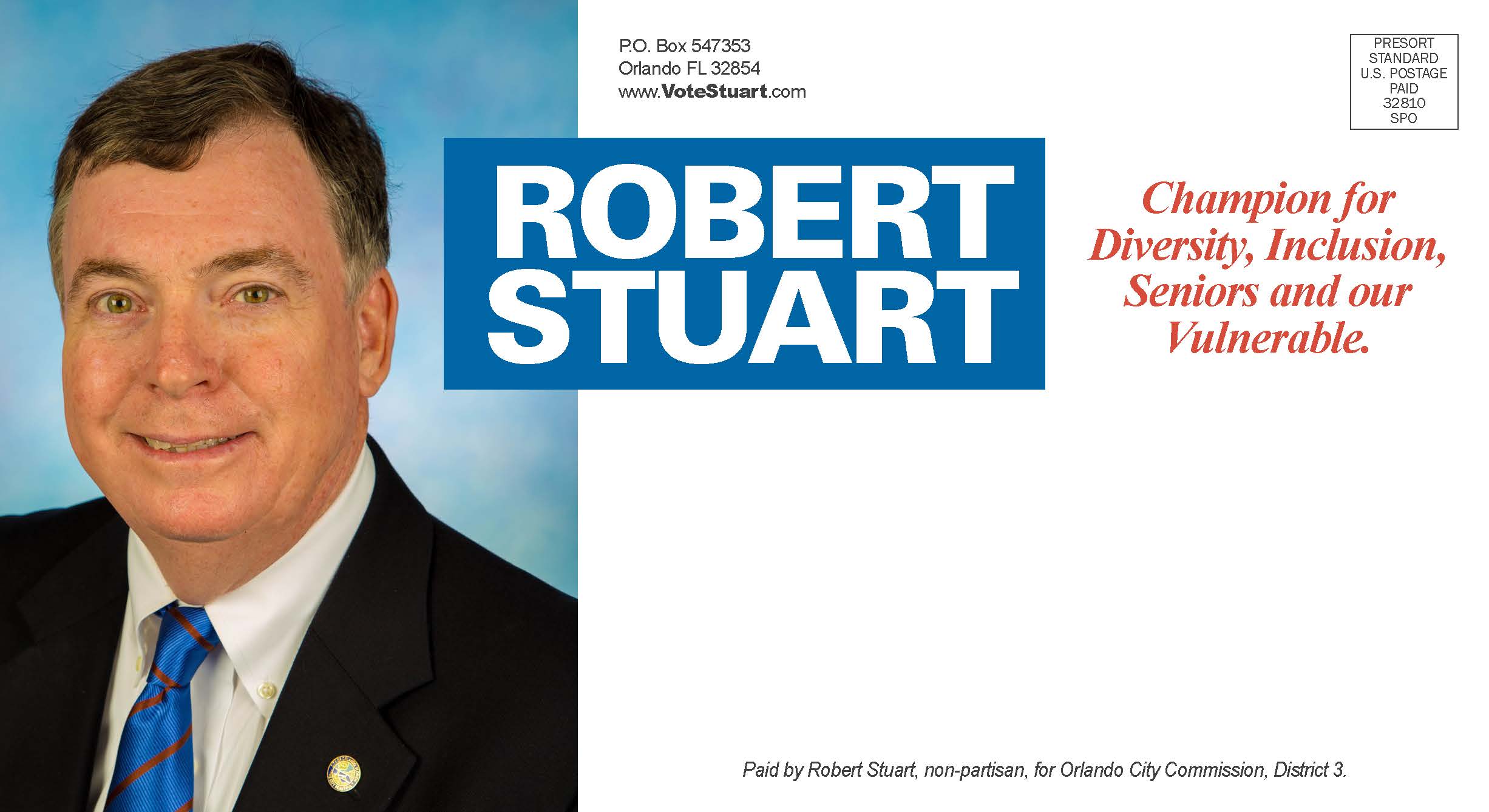 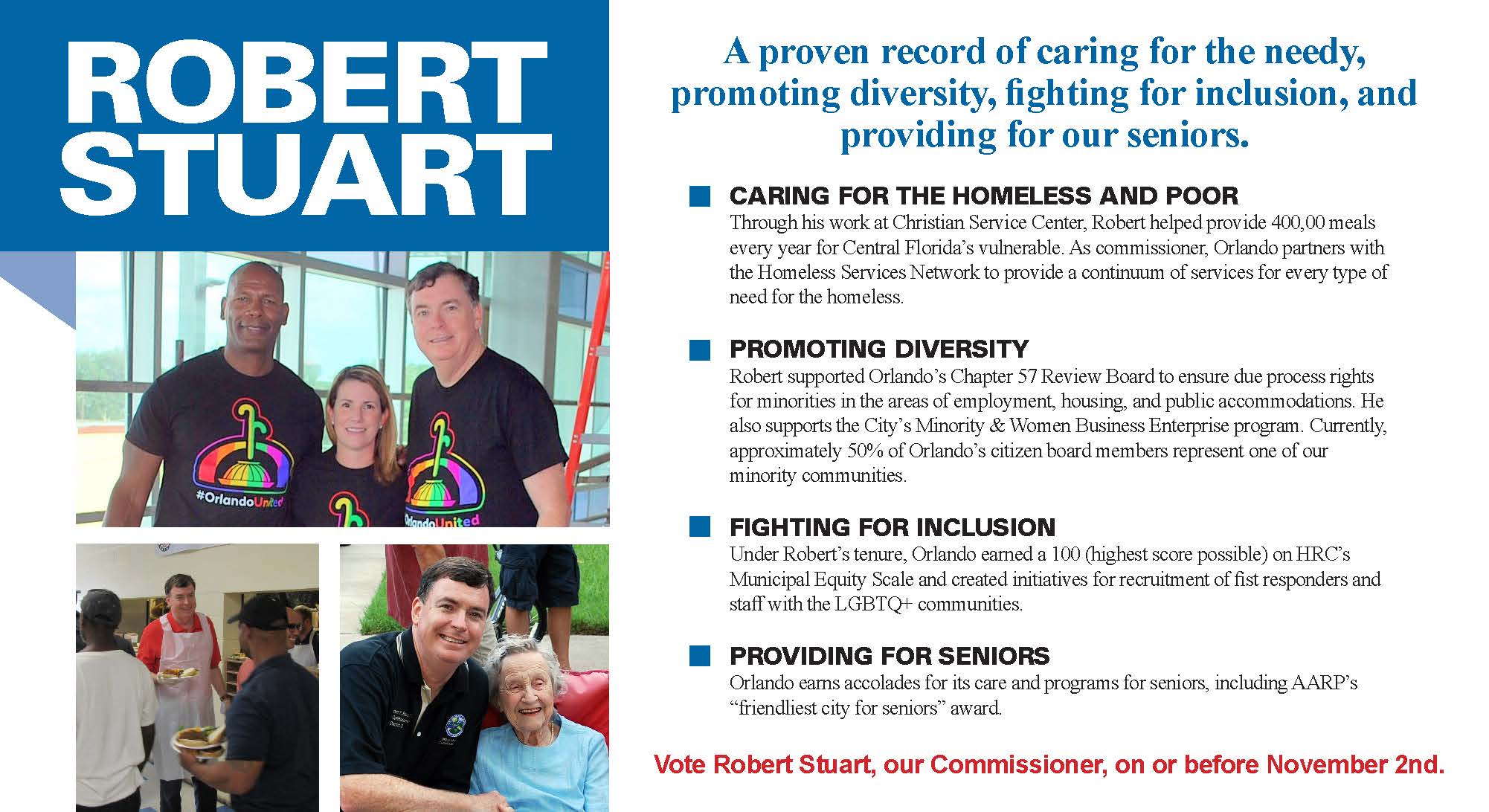 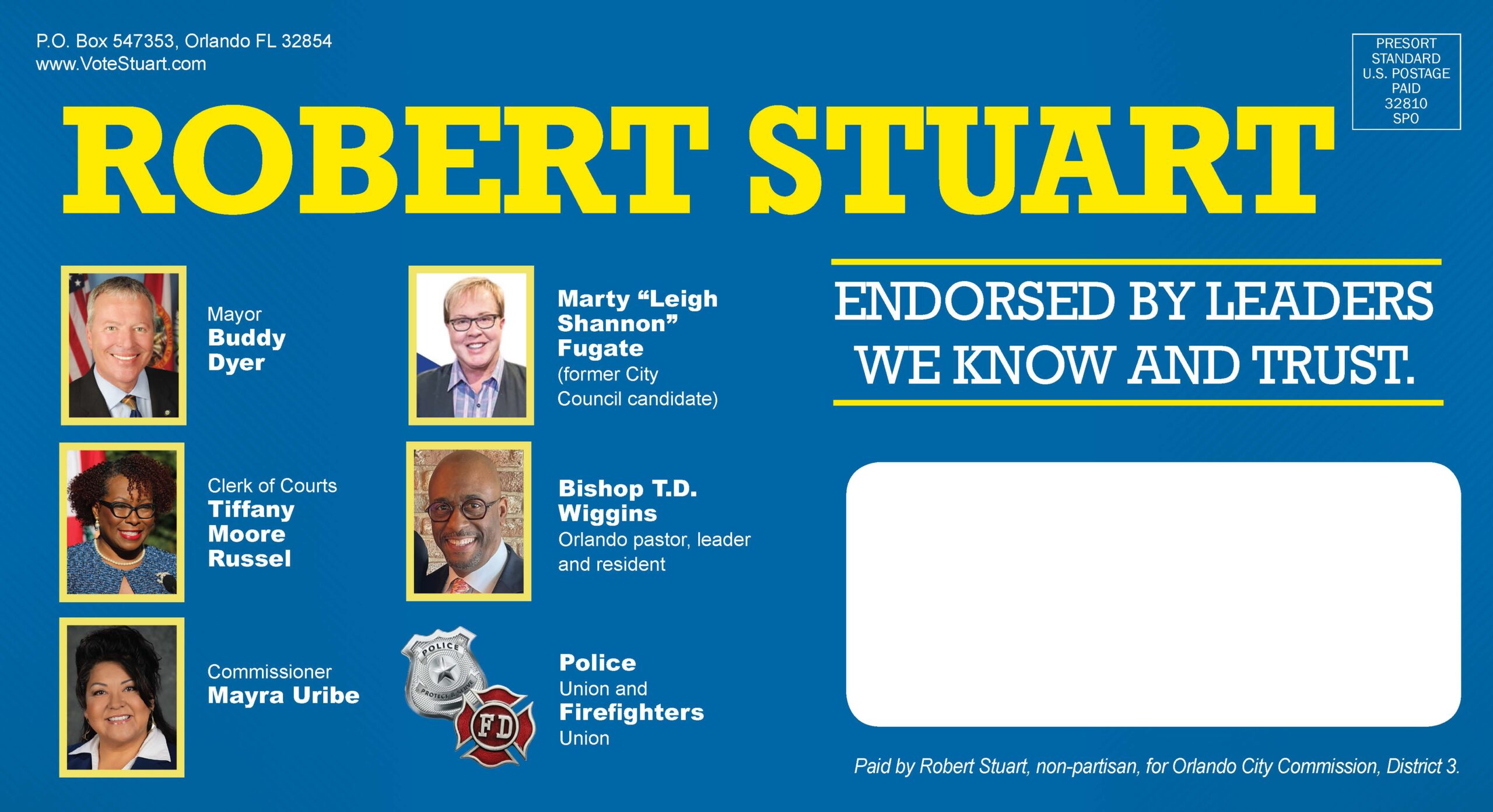 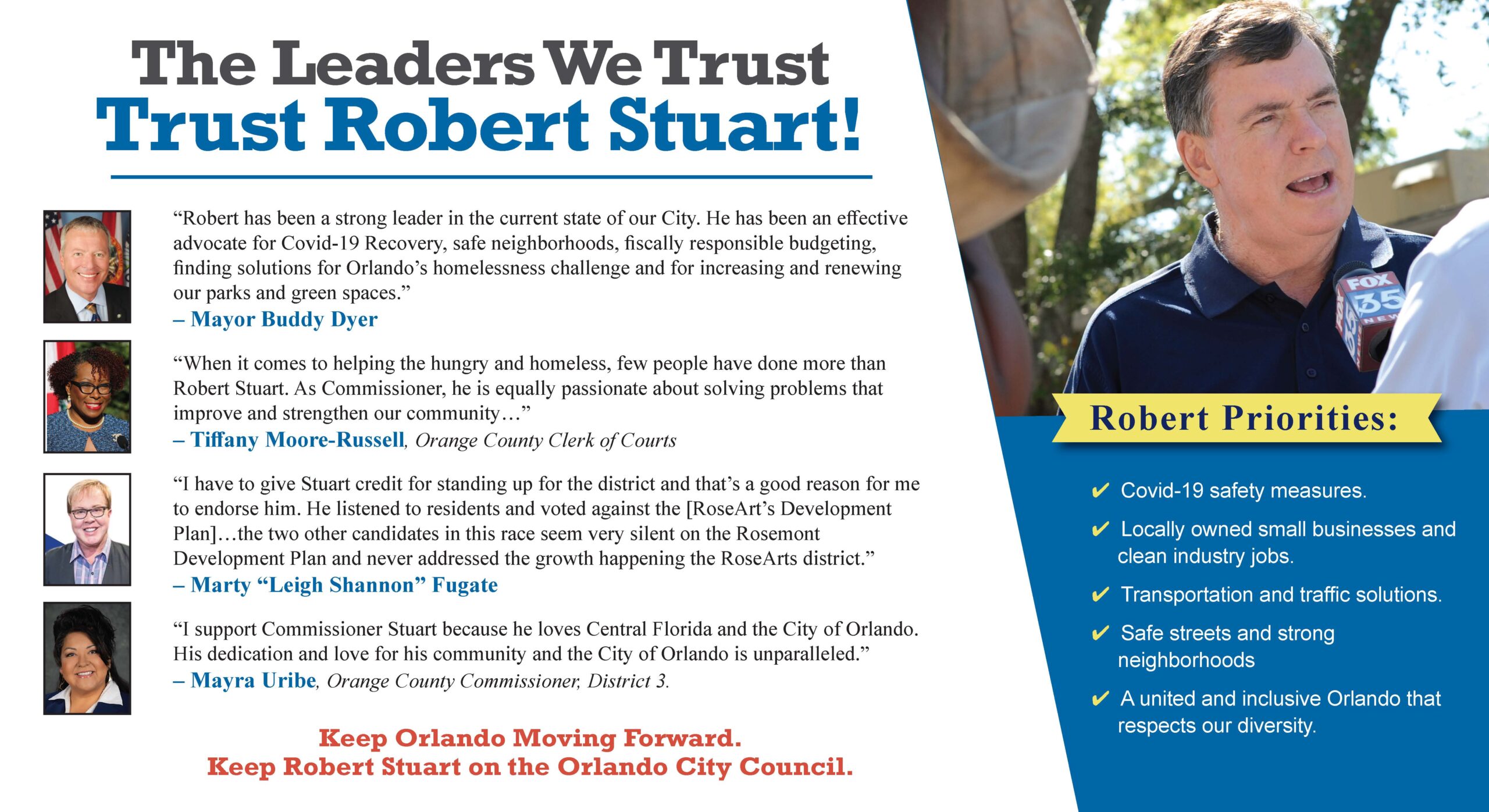 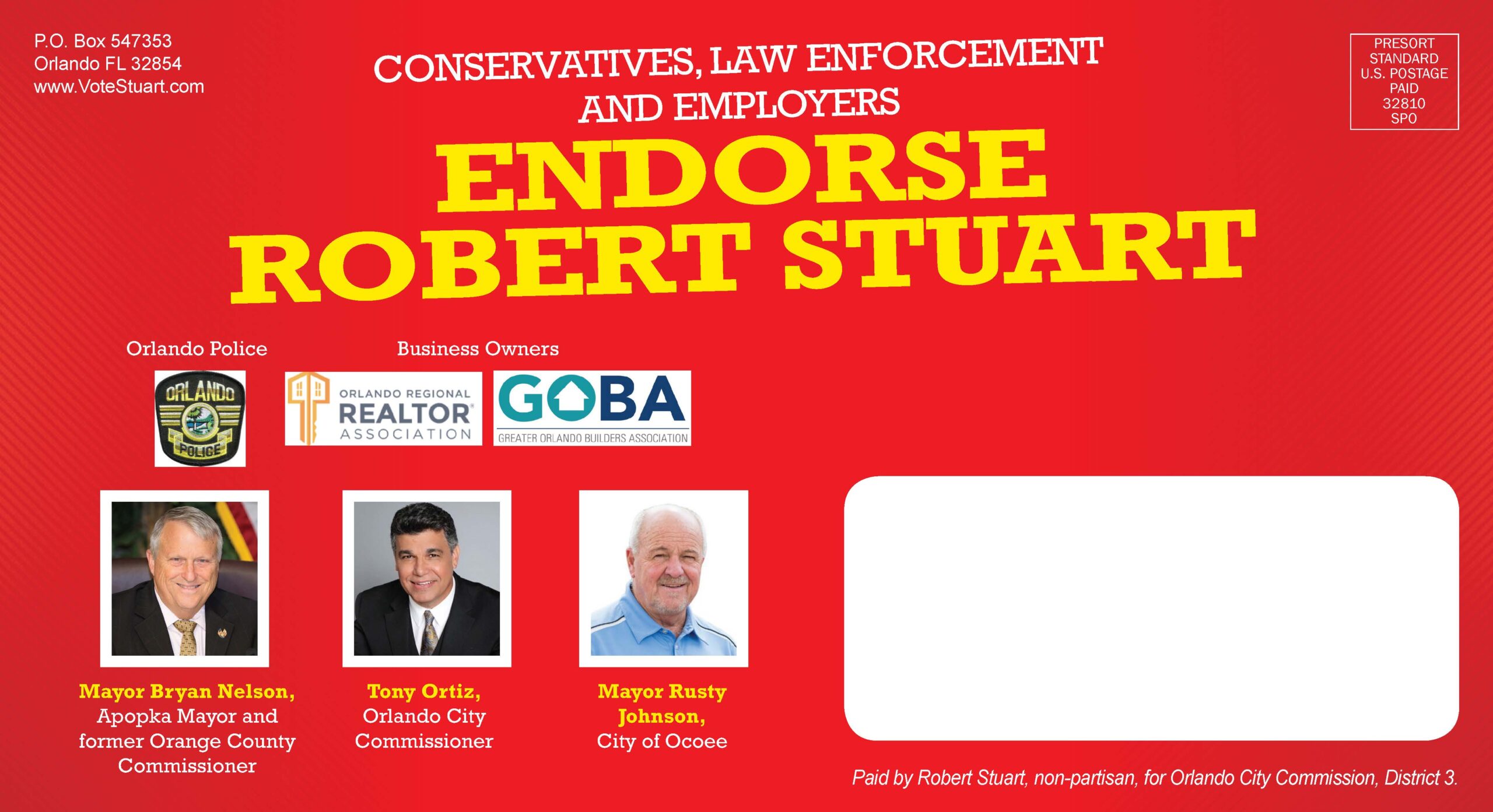 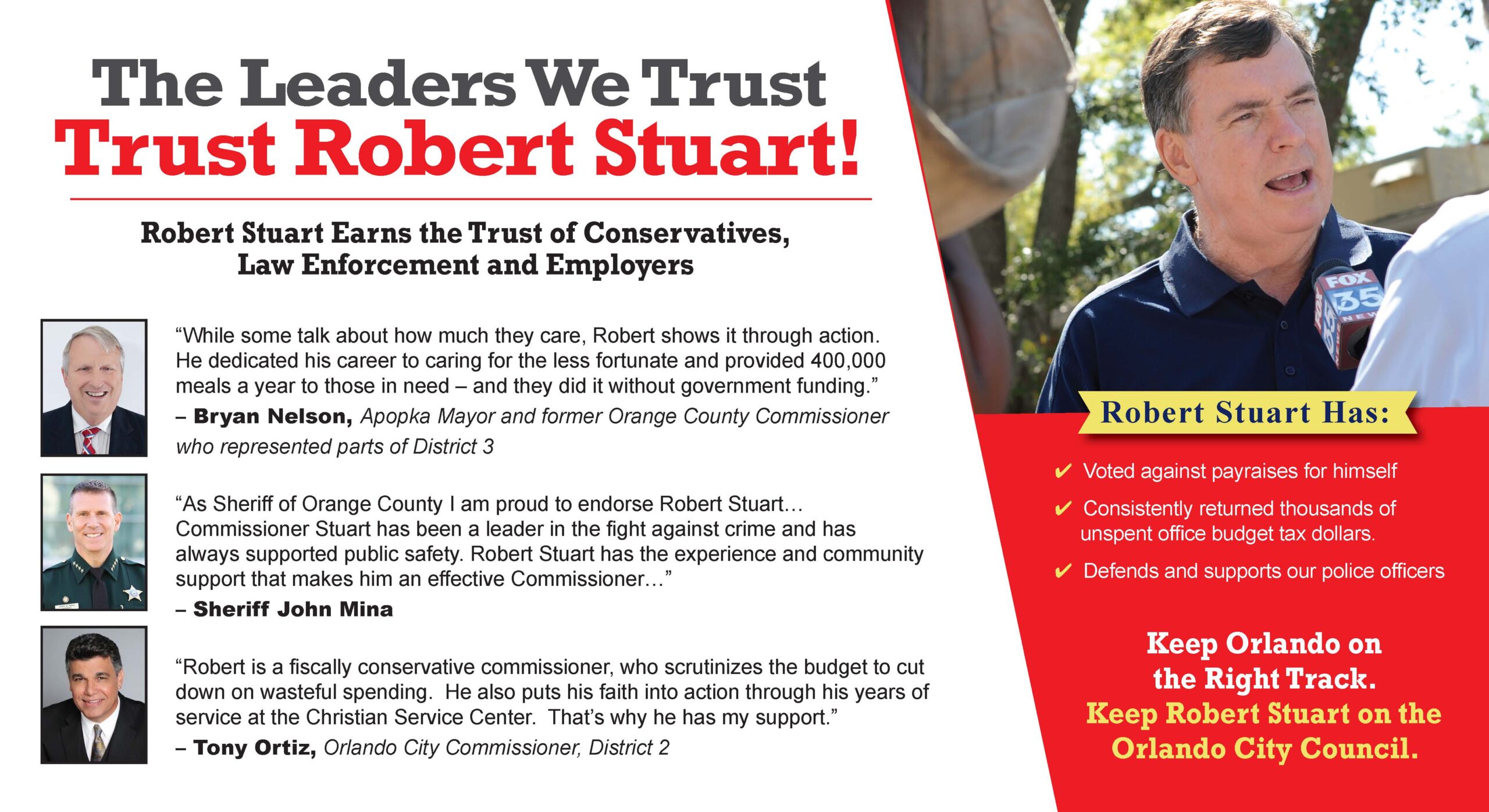 nextNot a trick: No White House treats for Halloween this year