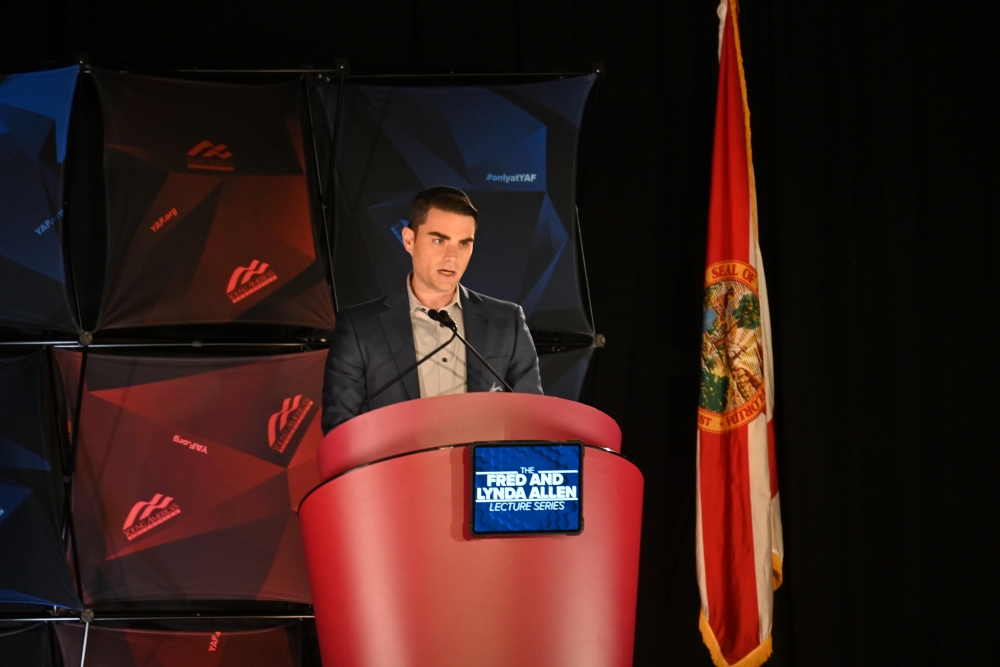 The sold-out event, “How wokeness is destroying America,” was hosted by the College Republicans at FSU and FSU’s Institute of Politics. It was organized by the Young America’s Foundation, a conservative youth organization that Shapiro has done over 50 college campus speaking events with since 2013.

Although the 1,500 person event was scheduled to start at 7 p.m., its standby line stretched the length of the hall’s courtyard by 5:30.

When the event began and Shapiro approached the podium, most of the audience stood and applauded. Shapiro then began tomahawk chopping at the crowd, to further applause and returned chops. Later in the evening, he said he did not see how the chop could be considered racist.

“If people went to a stadium and started cheering for the Jews, do you know how happy I’d be?” he said.

Shapiro centered his speech on how “wokeness,” what he defined as believing “that America is fundamentally racist, and that western civilization is, at root, similarly racist”, is ruining the country. He also tied “wokeness” to critical race theory, or the academic concept that racism is not just a product of individual bias or prejudice, but also in legal systems and policies.

“Racism, as anyone who looks at the world right now could note, is present in every society forever for all time,” he said. “It’s just an ugly part of human nature.”

A significant wealth gap exists between Black and White American families. The median household net worth of a White family was about $170,000 in 2016, while the median Black family net worth was about $20,000, according to the Brookings Institute.

During the event, Shapiro acknowledged the wealth gap, but attributed it to age differences between the two racial groups. The White median age was 43.7, compared to 34.6 for Black residents in 2019. Older people on average have a higher net worth than younger people.

Near the end of his speech, Shapiro pointed to Glenn Youngkin‘s victory in Virginia’s gubernatorial race earlier this month as a sign that pushing against CRT could be politically successful for Republicans in 2022. Youngkin campaigned on opposing CRT in public schools.

“Wokeness is going the way of the pterodactyl, and it should,” Shapiro said.

After his speech, he took questions from the audience for 45 minutes.

One audience member criticized Shapiro’s views on transgender people. Shapiro has said in the past he believes trans people are mentally ill and that sex and gender are interconnected. She pointed out that the American Psychological Association and the American Medical Association do not categorize being trans as a mental disorder and recognize sex and gender as two different concepts.

Shapiro responded that the medical consensus is false and “driven by politically driven quote, unquote doctors.”

Another audience member brought up Shapiro’s height, a feature that is a common target of his critics.

After the student said he was 5′ 9”, Shapiro called him on stage to stand next to him. Most of the audience laughed when they saw the two men were the same height.

“I’ve been waiting years to do that,” Shapiro said.

Before and during the event, a little more than a dozen members of FSU’s chapter of the Students for Justice in Palestine protested Shapiro’s appearance outside the venue. Some held signs calling Shapiro a fascist, others held signs mocking his height.

John Ocampo, president of the group, pointed to comments from Shapiro about Palestinian and Arab people. In 2010, Shapiro tweeted, “Israelis like to build. Arabs like to bomb crap and live in open sewage. This is not a difficult issue. #settlementsrock.” Shapiro partially retracted his tweet in later posts and during a viral interview with the BBC in 2019.

A handful of counter protestors stood in front of the protestors, recording them and asking them to debate. One of them was Browning Sandusky, a field representative for Turning Point USA, a nonprofit founded by conservative activist Charlie Kirk. He said he didn’t get why they were calling Shapiro, a Jewish man, a fascist.

“The Jewish community was completely against that, like, they’re the ones who were in the concentration camps of the fascists. So like, that didn’t make any sense,” he said.

As people in line entered the hall, Ocampo began chanting into a megaphone.

“Are you mad at us? Facts don’t care about your feelings,” he said.

A full video of Shapiro’s remarks and the Q&A is available on YAF’s YouTube channel.

Tristan Wood is graduating from the University of Florida this December, where he studies journalism. A South Florida native, he has a passion for political and accountability reporting. He previously reported for Fresh Take Florida, a news service that covers the Florida Legislature and state political stories operating out of UF’s College of Journalism and Communications. You can reach Tristan at [email protected], or on Twitter @TristanDWood