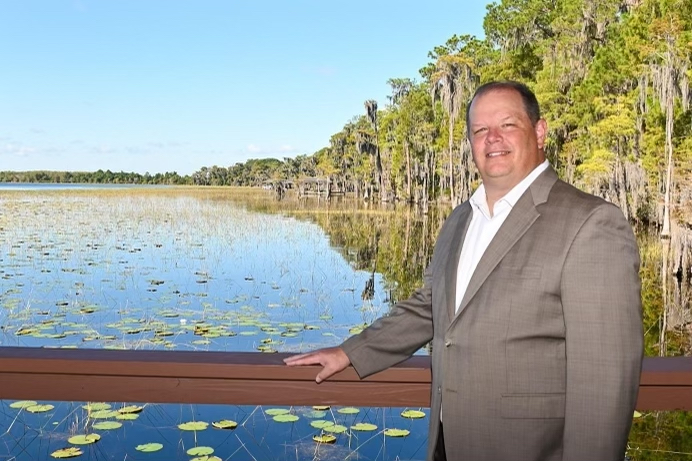 If he doesn't win, he might at least shed a few pounds.

Chadwick Hardee is kicking off his walk for a seat on the Orange County Commission.

That’s right — he’s walking, not running. Hardee is kicking off the event with a commitment to walk the race, if not to victory for the District 4 seat, to a goal of losing 75 pounds over the course of the campaign.

He’s inviting others to join him in a campaign he’s dubbing “Walk With Me,” saying he intends to brings people together while also getting them to commit to themselves. The commitment starts with himself.

“I’ve been big for a while. I thought it would be very nice to blend the two things and show some commitment to myself, quite frankly, and to my children,” Hardee said.

Hardee, of Orlando’s Lake Nona neighborhood, is among four candidates seeking the District 4 seat in 2022, including incumbent Commissioner Maribel Gomez Cordero, who is running for a second term. The race also has drawn candidacies from Mercedes Fonseca and Karl Anthony Pearson. All the candidates are from Orlando.

The county is redistricting its six Commission districts, so the candidate mix is subject to change. For now, District 4 stretches several miles across southern Orange County taking in Meadow Woods and Lake Nona and the rural areas to the Brevard County line. The district rises up through eastern Orange County to include Union Park, Waterford Lakes and Avalon Park.

Hardee expects much of his walking to be done via door-to-door canvassing throughout the sprawling district.

On Wednesday, he’s kicking off “Walk With Me” with supporters for a gathering at the Azteca D’Oro Mexican Restaurant in Lake Nona.

Hardee is a former collegiate wrestler (on athletic scholarship to Appalachian State) and an Air Force veteran, so he’s used to commitments. He is president of APDC Cleaning Services, which provides laundry services to such facilities as Raymond James Stadium, Tropicana Field, and more than 60 hotels and resorts across 12 states.

He ran unsuccessfully for Orange County School Board and also has served as vice president of the Orange County Council of PTAs. He said his County Commission campaign will have a similar theme, which seeks to create new opportunities for children to learn.

He envisions expanded use of the county’s libraries, community centers, and recreation centers, partnering with businesses to provide, for example, classes for students to learn and get interested in technologies. All children need to be exposed not just to gadgets but to the exciting technologies that make them possible, he said.

“People always say they’re running for their kids. Well, my kids are going to be fine. We go to golf. We go to jiu jitsu. We go to tennis. We help them with their homework … You need to run for their friends who don’t have anything to look forward to but free breakfast that day,” he said.

nextLast Call for 11.30.21 — A prime-time read of what’s going down in Florida politics