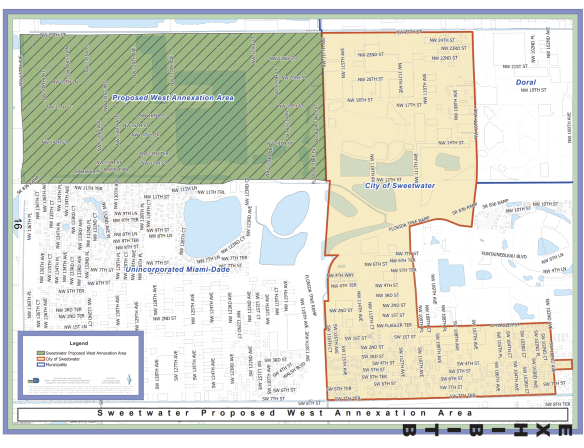 Unless there are court challenges, the annexations will become effective this month.

Sweetwater and Miami Gardens will expand next year to encompass additional areas, including a high-value commercial sector near Sweetwater that will nearly double the city’s size and may lower taxes for its residents.

Miami-Dade Commissioners OK’d the two annexations Wednesday after fewer than 10 minutes of discussion. Commissioner Joe Martinez, the sole no vote on both, called the moves “taxation without representation,” noting neither required a vote by residents or property owners.

Unless there are court challenges, the annexations become effective this month.

The two-square-mile area cleared for Sweetwater to annex includes tenants of the 436-acre Beacon Lakes Industrial Park, which hosts distributing centers for Amazon, Goya Foods, UPS and John Deere. It also contains Telemundo’s headquarters, Topgolf, a Home Depot, and many other businesses.

In May, the neighboring city of Doral applied to annex the area, which sits on its southwest corner. Two months later, however, the Commission blocked Doral’s request to take over the area, which generates more than $1 million in annual tax revenue, by requiring more than a corner connection to an area targeted for annexation.

Commission Chair Jose “Pepe” Diaz, a former Sweetwater Mayor who is rumored to be eying a return to the city’s top office after he reaches term limits next year, sponsored the rule change, which did not affect Sweetwater since it abuts the annexed area on the east.

Doral Mayor Juan Carlos Bermudez, who is running an unopposed campaign to replace Diaz on the Commission next year, likened the fast-tracked rule switch to “changing the rules in the middle of the game,” telling Florida Politics: “This is why people get bothered by government.”

Taking Sweetwater off Miami-Dade’s tax rolls will see the county lose more than $576,000 yearly after accounting for lost tax revenue and freed-up costs of services to the area, according to Miami-Dade Chief Financial Officer Ed Marquez.

Sweetwater Mayor Orlando Lopez told the Miami Herald he expects roughly $3.5 million in new annual revenue under the city’s tax rate of $3.99 for every $1,000 of a property’s taxable value.

The city will see a $1.5 million revenue uptick even after it adds services and police to the area, according to Lopez, who plans to suggest using the money to lower tax rates next year by about 25%.

But gains for the city are losses for the county, whose revenue shrinks every time an annexation passes, Martinez said, adding that it’s also a negative for the owners of nearly 300 property folios in the area, whose taxes will rise by an average of $5,100 yearly.

“I was elected to serve for Sweetwater, Miami Gardens, Miami, Miami Beach. That’s what I ran for, and that’s what I represent — the whole county. And yes, you do work with our municipalities and try to help them out, but not to the detriment of the county as a whole,” he said. “To me, it’s taxation without representation.”

Because they don’t count as residents, commercial property owners have no vote or say on the matter of annexation. Neither do the police who serve the area, said Martinez, a 17-year veteran of the Miami-Dade Police Department.

“Their concerns were always the more you take away from the whole, the less (police units there are) that serve countywide,” he said. “They’re being torn down.”

As with Sweetwater, the sponsor of Miami Gardens’ annexation ordinance was a former Mayor of the city, Commissioner Oliver Gilbert III.

But unlike with Sweetwater, the Miami Gardens annexation will net the county more than $84,000 annually after it turns over service costs to the city for the area, which is generally bounded by Northwest 183rd Street on the north, theoretical Northeast Fifth Avenue on the east, I-95 on the south and Northwest First Avenue on the west.

Lawyer Chad Friedman, who represented Miami Gardens during a Nov. 10 discussion on the issue at County Hall, characterized the annexation area as “extremely important” to the city.

While the millage rate there will rise post-annexation, he said, the city has “a detailed plan” to provide additional services and benefits, including enhanced police protection, capital improvements and dedicated code compliance and permitting personnel.

Bringing those additional services and benefits to the area, particularly police, “completes the city,” Gilbert said.

“When the city was created in 2003, this area was left out,” he said. “Right now, we know that because of some other activities in the area, it has an effect on the city of Miami Gardens that we’re forced to deal with from a law enforcement perspective. The city can provide great municipal services to this area.”