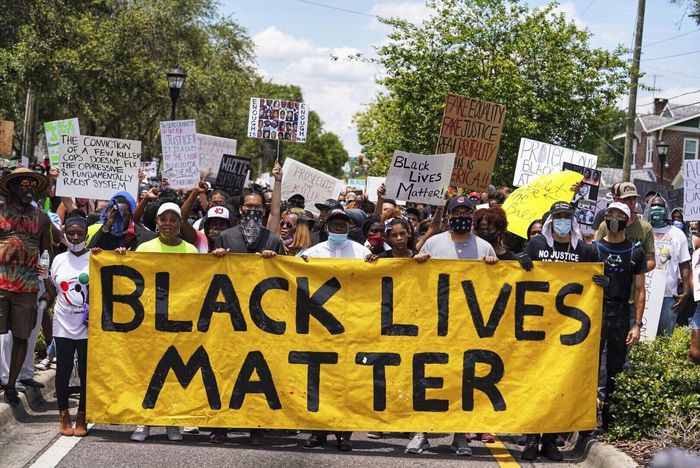 “I remember not being able to go,” she said. “I remember my uncles taking a chance to take us because they said we had a right to go. So they actually stood up, took us, and I remember — and I’ve shared this before — because it was very scary for me knowing that we could get hurt.”

Wheeler-Bowman and Deborah Figgs-Sanders are the only Black members of the eight-person Council. Wheeler-Bowman experienced segregation and racist practices built into city code.

Even the city’s famed green benches were off limits to Wheeler-Bowman’s grandmother and other Black residents when she was growing up.

“I remember walking from the grocery store with my grandmother when we stayed in Methodist Town,” she said. “And helping her carry bags and she’s so tired. But she can’t sit down because she couldn’t sit on a green bench. Now this is history, which is going to take us into our present.”

The history of racism in St. Petersburg was on display during Thursday’s City Council meeting. Council members voted 5-3 to adopt the findings of a study on structural racism in the city. Members Robert Blackmon, Ed Montanari and Gina Driscoll voted against the resolution.

The resolution had no actionable items.

“The passing of this resolution doesn’t in and of itself implement anything other than a show of support and acknowledgement that this study has happened and acknowledges its findings,” Deputy Mayor Kanika Tomalin said.

Accepting the report’s findings is St. Pete’s latest step in curing deeply ingrained racist and discriminatory practices that have pervaded the city since its founding. Over the summer, St. Pete declared racism in the city a public health crisis and residents have for years decried structurally racist policies and practices that have become part of the culture in St. Pete and around the country.

But the study marks the first qualitative and quantitative accounting of those elements.

Nikki Gaskin-Capehart, the city’s Director of Urban Affairs, said the report is at times difficult to read and can be even more difficult to accept. She said even growing up Black and experiencing racism herself did not prepare her for the trauma of compiling the city’s hurtful history. She said it wasn’t just a powerpoint presentation, but the summary of the lived experiences of a community of color.

“For those who might think that this is a scope-of-work completion, I ask that you peel back the layers and look deeply into what has had to take place for us to be here today with the recommendations before you and the resolution,” she said. “There’s pain on those pages.”

Historian Ray Arsenault wrote that some of the St. Pete area’s earliest settlers were “rabidly pro-Confederate” White men who fought to uphold slavery. For most of the city’s 123-year history, Black residents have lived, at best, as second-class citizens.

Through the mid-twentieth century, and in some cases beyond, laws existed that pushed Black residents to the fringes of society and and robbed them of opportunity. One law remanded Black residents to live in a certain area of the city. Its effects are still seen by the racial divide south of Central Avenue. Another law from the 1930s prevented Black residents from establishing businesses or living in the areas of the city designated for White people.

In the 40s, when Black citizens were finally able to freely vote in elections, the White Citizens Council was formed. It denounced the openly violent lynchings conducted by then-prominent groups like the Klu Klux Klan that operated in the city with impunity. Instead, the group focused on economics, religion and sex to justify further segregating Black residents.

Sam Johnson, who served as the city’s Mayor from 1951-1957, said in 1948 “in our endeavor to protect White areas (from) uncontrolled negro expansion, we may have gone beyond what was technically our concern.”

“This remark highlighted City Council was intentional in not addressing the issue of housing facing Black communities,” Dr. Ruthmae Sears said. “Although they were willing to implement practices to stagnate Blacks from obtaining building permits.”

Through the present, Blacks residents in St. Pete aren’t afforded some of the same opportunities as their White counterparts. And it shows in health, economic and crime data.

Black residents didn’t have a hospital they could go to until the 1920s. Before integration of schools, the Black children attended school half as long as White children. Presently, the infant mortality rate in Pinellas County is double for Black babies what it is for White babies.

“Discrimination was also documented in the city’s police force as documented by the 1965 lawsuit brought by the Courageous 12,” Sears said. “Policies enshrined in Florida Blackhood limited African-Americans’ freedom and ensured their availability as cheap labor.”

Sears pointed to vagrancy laws and other laws surrounding segregation that led to sentencing disparities and the “excessive policing and war posture” against Blacks in the city.

Council Member Driscoll said she appreciated the study, but it didn’t go far enough. She said she wanted to see more examples of current racist policies and more actionable items. She said the “truth hurts” and something must be done about it, but she could not accept the racist history of the police department.

“If this report is indicating that our police department is racist, I don’t see that myself. But you’ve got numbers here and we need to have that discussion,” she said. “But I am going to have a really hard time voting for something that would declare our police department as a racist department in our city. I was quite troubled by that.”

Driscoll said she had more questions and thought there needed to be more discussion before accepting the findings.

Figgs-Sanders and Wheeler-Bowman said they heard the rumblings of a can being kicked down the road. In a rare moment of verbosity, the usually quiet Wheeler-Bowman used all of her allotted 10 minutes.

“Let’s just admit it, talk about (it) and make this happen. We can do it. This Council can do it. It’s not gonna take a-whole-nother Council. It takes us. It starts with us. If we sit up here and we continue to say ‘I don’t understand, I want to understand more,’ well goddamnit, I’m sorry. And yes, you can say I’m an angry Black woman, but you’re very mistaken. I’m just a determined Black woman and I speak my mind. So we can do this. Let’s not be afraid. Let’s not kick the can down the road again.”

Tomalin said now that the city has acknowledged the existence of structural racism it can root it out. The studies recommendations include:

— Continued support for the work started in the study.

— Create and implement an effective accountability strategy buttressed by measurable outcomes that are tracked over time with disaggregated data.

— Take action to advance the unanimous approval of City Council to approve a permanent resident race equity board, such as the African American Quality of Life Sunshine Committee

“Now that St. Pete has documented, through qualitative and quantitative evidence, many of the answers to our initial question, the new question before the city’s leaders is what will be done about it? What will we do now that we know?” Tomalin said. “Good and wise work to see an African-American Quality of Life committee precedes this study. Council already unanimously approved the request to administration for its creation. And we will recommend to the incoming Mayor that this work be among his highest priorities.”