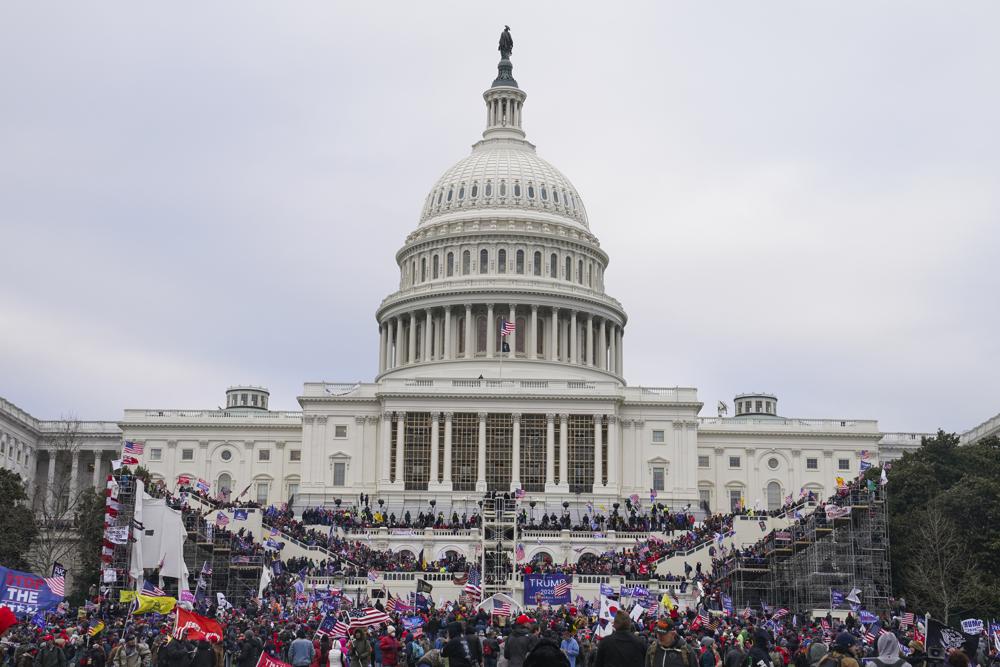 The case could be headed for a stop in the Supreme Court.

A federal appeals court ruled Thursday against an effort by former President Donald Trump to shield documents from the House committee investigating the Jan. 6 insurrection at the Capitol.

In a 68-page ruling, the three-judge panel tossed aside Trump’s various arguments for blocking through executive privilege records that the committee regards as vital to its investigation into the run-up to the deadly riot that was aimed at overturning the results of the 2020 presidential election.

Judge Patricia Millett, writing for the court, said Congress had a “uniquely vital interest” in studying the events of Jan. 6 and that President Joe Biden had made a “carefully reasoned” determination that the documents were in the public interest and that executive privilege should therefore not be invoked. Trump also failed to show any harm that would occur from the release of the sought-after records, Millett wrote.

“On the record before us, former President Trump has provided no basis for this court to override President Biden’s judgment and the agreement and accommodations worked out between the Political Branches over these documents,” the opinion states.

It adds, “Both Branches agree that there is a unique legislative need for these documents and that they are directly relevant to the Committee’s inquiry into an attack on the Legislative Branch and its constitutional role in the peaceful transfer of power.

The appeals court ruled that the injunction that has prevented the National Archives from turning over the documents will expire in two weeks, or when the Supreme Court rules on an expected appeal from Trump, whichever is later. Lawyers for Trump can also ask the entire appeals court to review the case. Seven of the 11 appellate judges on the court were appointed by Democratic presidents, four by Republican presidents.

The panel’s leaders, Reps. Bennie Thompson, a Mississippi Democrat, and Liz Cheney, a Wyoming Republican, hailed the ruling, saying it “respects the Select Committee’s interest in obtaining White House records and the President’s judgment in allowing those records to be produced. Our work moves ahead swiftly. We will get to the truth.”

But Trump’s spokeswoman said the matter was far from settled.

“Regardless of today’s decision by the the appeals court, this case was always destined for the Supreme Court,” Liz Harrington said. “President Trump’s duty to defend the Constitution and the Office of the Presidency continues, and he will keep fighting for every American and every future Administration.”

In its ruling, the court said the executive privilege being asserted by Trump is not a personal privilege but instead one that he “stewards” for the “benefit of the Republic.”

“The interests the privilege protects are those of the Presidency itself, not former President Trump individually. And the President has determined that immediate disclosure will promote, not injure, the national interest, and that delay here is itself injurious,” the opinion states.

Biden had the committee defer its requests for some of the early documents that might have posed privilege claims, and officials expect more documents in subsequent tranches will be subject to the same outcome.

The court praised Biden’s “calibrated judgement” in working with Congress and the Archives to weigh privilege concerns, saying it “bears no resemblance to the ‘broad and limitless waiver’ of executive privilege former President Trump decries.”

White House spokesman Mike Gwin said, “As President Biden determined, the constitutional protections of executive privilege should not be used to shield information that reflects a clear and apparent effort to subvert the Constitution itself.”

Trump sued the House Jan. 6 committee and the National Archives to stop the White House from allowing the release of documents related to the insurrection. Biden had waived Trump’s executive privilege claims as the current officeholder.

At issue, the court said, is not that Trump “has no say in the matter” but rather his failure to show that withholding the documents should supersede Biden’s “considered and weighty judgment” that Congress is entitled to the records.

The National Archives has said that the records Trump wants to block include presidential diaries, visitor logs, speech drafts, handwritten notes “concerning the events of January 6” from the files of former Chief of Staff Mark Meadows, and “a draft Executive Order on the topic of election integrity.”

Arguing for the committee, U.S. House lawyer Douglas Letter argued that the determination of a current President should outweigh predecessors in almost all circumstances and noted that both Biden and Congress were in agreement that the Jan. 6 records should be turned over.

All three of the appeals court judges who heard the arguments were nominated by Democrats. Millett and Judge Robert Wilkins were nominated by former President Barack Obama. Judge Ketanji Brown Jackson is a Biden appointee seen as a contender for a Supreme Court seat should one open during the current administration.

next'Not anymore': Joe Martinez backs off on prospect of running for Miami-Dade Sheriff