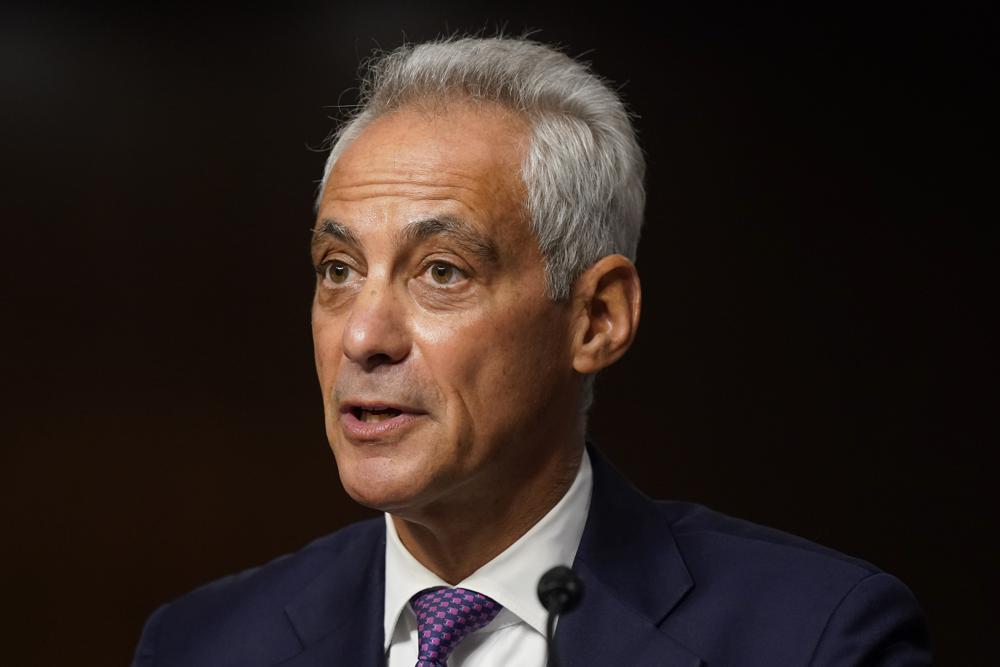 “Something’s going to happen in one of these places and we will not be there to ultimately have someone to promote our interests and to protect ourselves."

The Senate confirmed more than 30 ambassadors and other Biden administration nominees early Saturday after Majority Leader Chuck Schumer agreed to schedule a vote on sanctions on the company behind the Nord Stream 2 pipeline that will deliver natural gas from Russia to Germany.

With many senators anxious to go home for the holidays, Schumer, a New York Democrat, threatened to keep the Senate in for as long as it took to break a logjam on a broad array of diplomatic and national security nominees.

Rahm Emanuel, the former mayor of Chicago, was confirmed to serve as ambassador to Japan by a vote of 48-21. Nominees to be ambassadors to Spain, Vietnam and Somalia were among those confirmed by voice vote soon afterward. The votes came after an agreement was reached to hold a vote concerning Nord Stream 2 sanctions before Jan. 14.

The confirmation process has proved to be frustrating for new presidential administrations regardless of party. While gridlock isn’t new, the struggle to staff administrations is getting worse.

Democrats have increasingly voiced concerns about holds that a few GOP senators placed on nominees to raise objections about foreign policy matters that had little to do with the nominee. The holds don’t block a nominee from being confirmed, but they do require the Senate to undertake hours of debate that could be used on other priorities. As a result, positions requiring Senate confirmation can go unfilled for several months even when the nominations are approved in committee with the support of senators from both parties.

Biden administration officials acknowledge the president will end his year with significantly more ambassadorial vacancies than recent predecessors and that the slowdown of ambassadorial and other national security picks has already had an impact on U.S. relations overseas.

Sen. Ted Cruz, a Texas Republican, held up dozens of nominees at the departments of State and Treasury over objections to the administration’s waiving of sanctions targeting the Nord Stream AG firm overseeing the pipeline project. The administration said at the time that it opposed the project but viewed it is a fait accompli. It also said trying to stop it would harm relations with Germany.

Critics on the both sides of the aisle have raised concerns that the pipeline will threaten European energy security by increasing the continent’s reliance on Russian gas and allowing Russia to exert political pressure on vulnerable Eastern and Central European nations, particularly Ukraine.

Earlier in the week, Schumer demanded that Cruz lift all of his holds on nominees at the two Cabinet departments as well as the U.S. Agency for International Development as part of any possible agreement on a Nord Stream 2 sanctions. Cruz said he was willing to lift holds on 16 nominees. The two sides were trading offers throughout the day Friday.

“I think there ought to be a reasonable middle ground solution,” Cruz said.

While Democrats were intent on making progress on Biden’s nominees, they also viewed it as too little and too late.

“Let’s face it. There is little to celebrate when it comes to nominations in the Senate,” said Sen. Bob Menendez, chairman of the Senate Foreign Relations Committee.

Menendez, a New Jersey Democrat, blamed some Republicans for “straining the system to the breaking point” and depriving Biden of a full team of national security positions, “leaving our nation weakened.”

“Something’s going to happen in one of these places and we will not be there to ultimately have someone to promote our interests and to protect ourselves,” he said.

But Republican Sen. Roy Blunt said that some of the gridlock on nominations stems back to four years ago when Democrats, under Schumer’s leadership, tried to prevent many of President Donald Trump’s nominees from being confirmed in a timely manner.

Eight Republicans ended up voting with a majority of Democrats to confirm Emanuel. Three Democrats voted against his confirmation: Sens. Ed Markey and Elizabeth Warren of Massachusetts, and Sen. Jeff Merkley of Oregon.