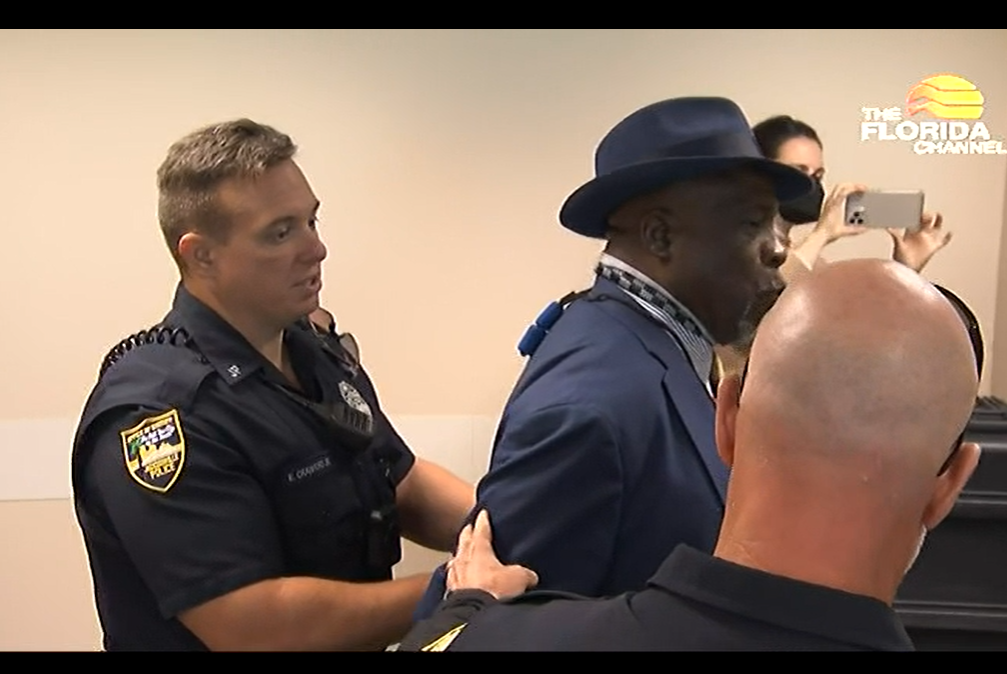 "I have no idea what happened," DeSantis said after the incident.

Gov. Ron DeSantis visited Jacksonville Tuesday, amid a serious spike in COVID-19 cases and a shortfall in local testing, to announce his intention to increase monoclonal antibody treatment in Jacksonville. “America’s Governor” didn’t count on being greeted by angry members of the public, however.

Instead, his event was derailed as staffers could not clear members of the public from the space, with an extended delay before the arrest of a local protester who wanted to ask DeSantis questions.

The press conference was delayed by activist Ben Frazier who showed up and said he was not leaving. Others were with him, but Frazier became the center of the controversy.

Police and staffers entered the room, and others, including Wells Todd, said they wanted to ask DeSantis about critical race theory and other topics DeSantis has politicized. Frazier, a former broadcaster, held firm, asking about having a private press conference in a public building.

Frazier was told by a man who described himself as a facilities manager that the conference was only for “credentialed press” and asked everyone to leave “who is not media.” According to the Northside Coalition of Jacksonville’s website, Frazier serves as the president and is a former journalist.

“When it comes down to public welfare, this Governor does not care,” went some chants thereafter.

As they handcuffed him, he asked “Why am I being handcuffed? Am I being arrested?”

Frazier was brought to ground level, where two police officers put him in the back of a police car, while supporters of Frazier’s looked on.

“I have no idea what happened,” DeSantis said when asked about the incident after his remarks, shutting down inquiry.

Rep. Angie Nixon, a Jacksonville Democrat, lambasted DeSantis in a statement released after the incident.

“In Florida, the people come last. In Florida, the Governor runs and hides when the people demand to be a priority. In Florida, peacefully questioning authority gets you arrested. Public service is the people’s business and the Governor must answer for his failings. There’s nothing private about America witnessing the suffering that Floridians have endured because of Governor DeSantis’ people-last strategy,” she said.

House Democratic Leader-Designate Ramon Alexander added, “The hypocrisy of Governor DeSantis’ ‘Free State of Florida’ was on full display today in Jacksonville. It’s only free if you agree with him, and you can only attend his events if you are a cheerleader for his political ambitions. You’re free to catch the virus in Florida, but don’t you dare question the Governor’s policies.”

Florida Democratic Party chair Manny Diaz described the arrest as “not only unjust, but un-American. While peacefully exercising his First Amendment rights in a public building, Mr. Frazier was removed in handcuffs and placed in the back of a patrol car. To add insult to injury, Mr. Frazier, who is disabled, was not even permitted to use his electric wheelchair to leave.“

“Today, a Democrat activist, Ben Frazier, attempted to disrupt Governor DeSantis’ press conference related to the distribution of life-saving COVID treatments for Duval County.  It is on record that he was politely asked to leave and refused multiple times, upon which he was escorted out by law enforcement.  This is not the first time Mr. Frazier encounters the law. He does not have a history of respecting law and order much less standard protocol for a press conference,” argued the Republican Party of Florida in a statement.

DeSantis spokesperson Christina Pushaw tweeted about the incident, likening it to the Capitol riots that delayed certification of the 2020 Presidential election last year.: “It’s almost the anniversary of J6, and Democrats in my replies are insisting that government buildings should always be open to any member of the public who wants to confront an elected official, and nobody should be arrested for trespassing in a government building! Wow!”

Ahead of the Q&A, DeSantis stepped to the microphone, with son Mason by his side, as he announced the expected fulfillment of a city request to add more monoclonal treatment locally.

“If we get more treatments,” DeSantis pledged the state would open an additional site in Jacksonville later this week.

The Governor lamented getting just 12,000 doses in the recent tranche from the federal government as “totally, totally inadequate,” and a cut of 2,000 doses week over week.

“It’s about half as much as was sent to the state of New York. That is wrong. Bogarting these treatments is wrong,” DeSantis said, invoking counterculture slang from a bygone era to illustrate his point.

The Governor noted the “good news” about omicron, including it being less pathogenic.

“Most patients in Florida are delta patients, not omicron patients,” DeSantis said.

The Governor said vaccinations weren’t stopping the “very contagious” omicron, and in that context “providing the ability to get the treatments is important.”

DeSantis also promised that tests would go to nursing homes and to other high-risk populations, lamenting the lack of at-home tests sent from the federal government.

Duval County has yet to see the worst from this wave.

Cases are up more than 200% over the last seven days, while hospitalizations are up 242%. The 12% positive testing rate, the early closures and supply issues at testing sites, and other such issues are leading Jacksonville to look at expanding testing capacity.

Against that backdrop, DeSantis came back to the city he had so often held up as a model of rationality earlier in the pandemic. Jacksonville was where the Governor rolled out the first state monoclonal antibody clinic at the downtown library, and months after that move during the delta surge, he returned again.

But unlike those previous visits, serious complications ensued, and the story became not the monoclonal antibodies, but an arrest before DeSantis even took the mike.

Frazier was charged with trespassing and given a notice to appear, as first reported by Jim Piggott of WJXT. By evening, national outlets including The Washington Post had picked up the story and the name “Ben Frazier” was trending on Twitter. The activist’s social media following grew by several thousand.

Frazier himself tweeted about the incident with a sense of accomplishment, while

“The fight for civil rights continues in Jacksonville, Florida!” he posted on Twitter. “This is not just a moment; this is a movement. Immense gratitude for the support today. Stop playing politics with the pandemic. Gov. Ron DeSantis put censorship and cancel culture on full display. Good Trouble resumes.”

previousCOVID-19 was the 3rd leading cause of death in 2021