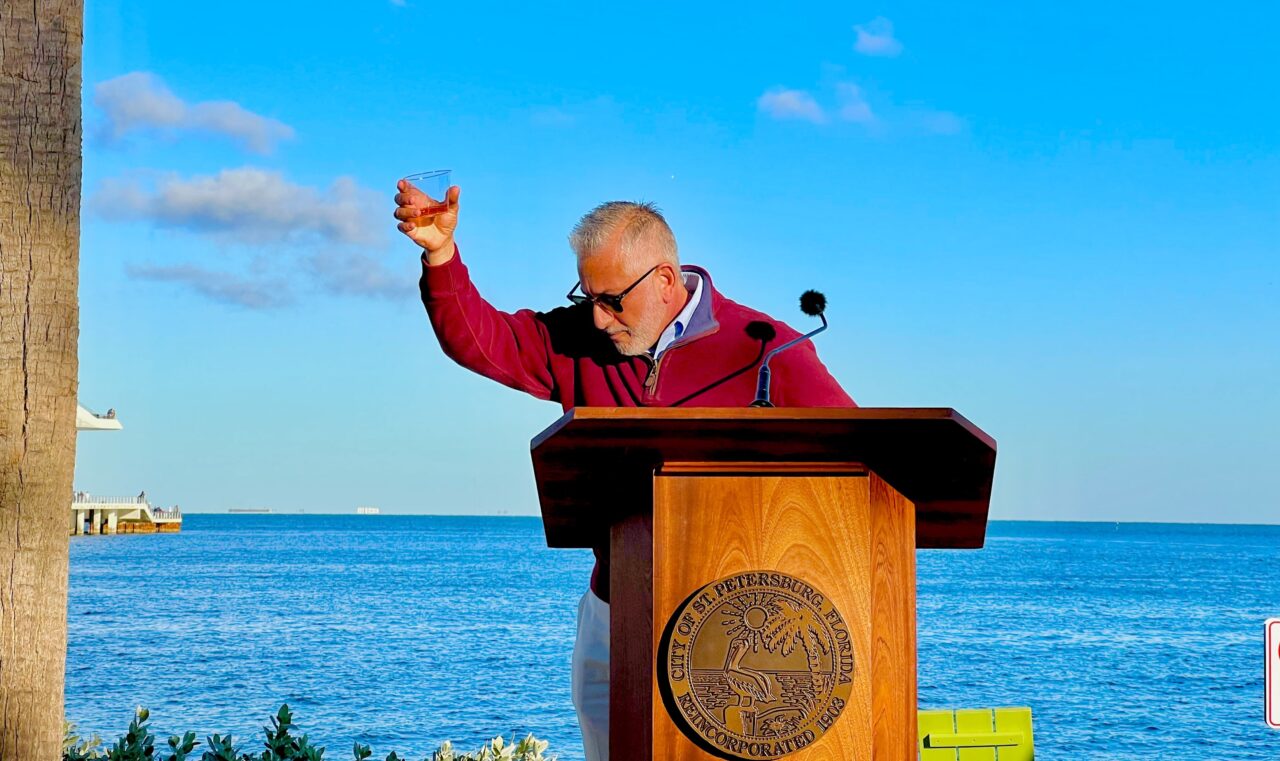 With a glass of rum and a cheers, Rick Kriseman bid leading the Sunshine City farewell Monday.

The air around the St. Petersburg Pier was chilled, and so was the rum.

Mayor Rick Kriseman stood on the back deck of Doc Ford’s Monday with the Pier — one of his administrations crowning achievements — his back drop. He held a glass of Bumbu Rum (served shaken, chilled and straight) over his bowed head and gave a cheers to the pride he’s seen in residents of the Sunshine City.

“When you go visit another city. When you see people wearing hats or shirts with that name of that city, you know who those people are? They’re tourists,” he said. “You know who they are in St. Pete? They’re residents.”

The Doc Ford’s stop came in the waning days of Kriseman’s administration. The two-term Mayor will transfer power to Mayor-elect Ken Welch as Welch and the new City Council are sworn-in to office Thursday.

“Ken and I, we’ve been friends for more than 20 years. We’ve done everything we can to try to make sure when he’s sworn in he’s been given everything we can give him so he can hit the ground running and keep our trajectory moving forward,” Kriseman said.

Part of that moment will include how to handle ever-increasing surges of COVID-19 positivity thanks to the highly transmissible omicron variant. Welch even had to postpone his own inauguration celebration and take the ceremony virtual as he recently tested positive for the virus himself.

There’s also the increased disparity in housing affordability and rising rents. Welch, the city’s first Black Mayor, will also have to navigate the implementation of policy recommendations after the city accepted the results of a study documenting St. Pete’s racist history.

Kriseman said his phone will always be at the ready if Welch calls.

And while, the incoming Mayor might be walking into a city that’s growing up — both figuratively, as its status and influence grows, and literally, as more and more high-rise buildings fill the skyline — Kriseman said he’s proud of where the city has come in the last eight years.

“I hope my legacy is that I changed the culture of this city to become one that is more diverse, more tolerant, more welcoming, where we focused on equity and inclusion,” he said.

He said moments like the 2017 Women’s March, which was supposed to attract a few hundred and brought 25,000 to the city, and the candlelight vigil on the steps of City Hall after the Pulse shooting were “goosebump” moments during his tenure at the city’s helm.

Kriseman said being Mayor was the highlight of 21 years working in politics. And while he’s sure he’ll likely wind up in the government relations field or something similar in the future, he said he’s not going to be running for anything. And for now, he’s channelling a bit of Michael Bluth and putting family first.

“For the next little bit I’m going to take a little time off. Clear my mind,” he said. “Then decide where I can make the most impact. What makes the most sense for my family.”

But before all that, another rum.