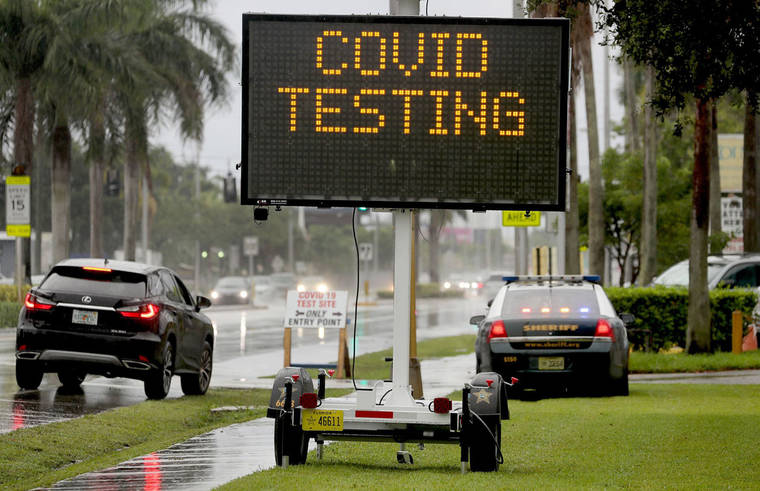 South Florida’s congressional Democrats and a Miami state Senator on Tuesday called for Gov. Ron DeSantis to open state testing sites and blasted his response to the current surge of COVID-19 infections.

They said DeSantis is missing in action at best and an actual health threat at worst, by downplaying vaccinations, face masks and testing asymptomatic patients as the seven-day average of positive COVID-19 cases reached new levels Tuesday.

“The state of Florida did the most irresponsible thing that any state could do and that is to tie the hands of municipal governments so they cannot keep their cities and the people who live within safe,” Jones said.

U.S. Rep. Debbie Wasserman Schultz of Weston said Florida is one of the most dangerous and least-prepared states in the nation. She pointed to long lines for testing and advice from the state’s top doc that people should not be “planning and living one’s life” around testing.

But Christina Pushaw, the Governor’s spokeswoman, said Florida is by no means the most dangerous place to be.

“The members of Congress should ask their Democrat colleague, Alexandria Ocasio-Cortez, why she decided to leave her lockdown city for a vacation in Miami if Florida is truly the most dangerous place to be,” she said.

Pushaw said Tuesday the state will have an update on state testing sites “soon.”

“The state of Florida is working to secure and distribute additional tests to those in need,” she wrote in an email.

But she also wrote, “The Governor mentioned … that the federal government has not prepared adequate supplies to support their policy of mass testing (including of asymptomatic, vaccinated individuals).”

“What he did not mention is that statistics from Miami-Dade County hospitals confirmed that the overwhelming majority of COVID patients are unvaccinated — 79% of them,” Frankel said.

Deutch said he’s hoping state leadership will stop arguing about vaccines and face masks. He alluded to “boxing matches” between local and state officials, like the one between the state, downplaying the protective effects of face masks, and school districts that wanted to require students to mask up.

“It’s a choice between moving forward or continuing to wage these unnecessary battles,” he said.