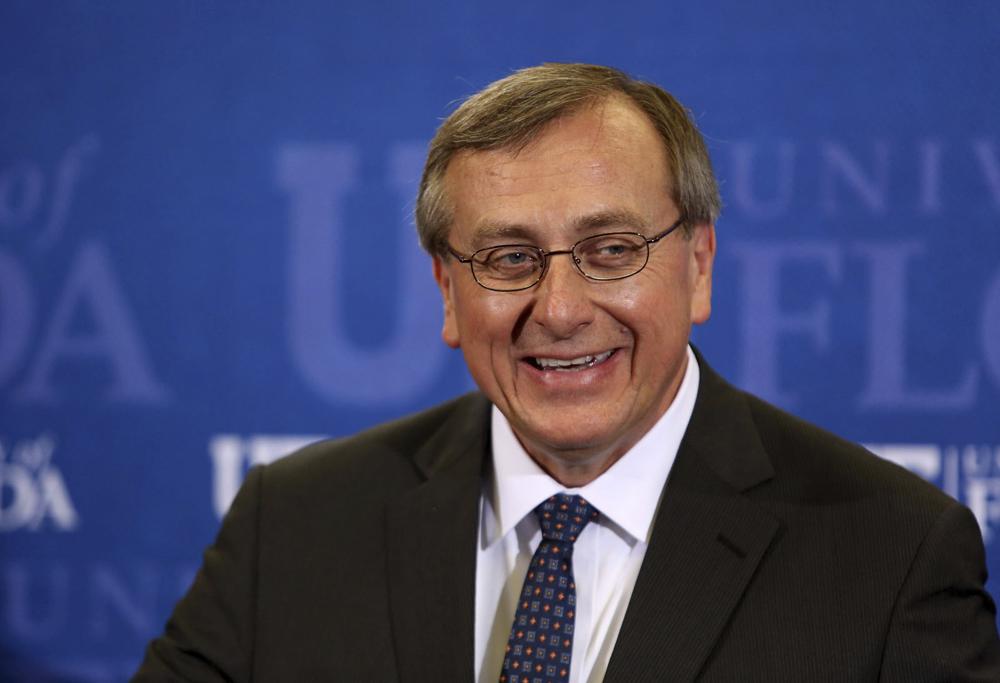 Fuchs said he will remain president through the fall semester later this year and until the next president is appointed.

Kent Fuchs, the president of the University of Florida during the school’s ascension to a Top 5 ranked public university but whose leadership was questioned over his reluctance to challenge Gov. Ron DeSantis, said Wednesday he will step down.

Fuchs, 67, who had been appointed the 12th president of the state’s flagship university in 2014, made the surprise announcement on the first day of spring classes. He said he had quietly informed the chairman of the board of trustees, Mori Hosseini, about his decision back in August.

Fuchs said he will remain president through the fall semester later this year and until the next president is appointed, which was expected by early 2023. He said he plans to return to conducting research and teaching electrical and computer engineering at Florida after a sabbatical.

Under Fuchs’ tenure, Florida increased the number of full-time faculty from 3,691 to 4,642, and increased research spending from $709 million to nearly $1 billion. Those initiatives — in part funded by generous appropriations under the DeSantis administration and Florida’s Republican-led Legislature — helped the university rise to its current No. 5 position among public universities in annual rankings by U.S. News & World Report.

Student applications soared, too, growing from 29,000 to 60,000 for the upcoming fall semester.

Fuchs’ presidency was overshadowed in recent years by his perceived unwillingness to challenge the conservative policies of DeSantis, who was elected in 2018.

The university recorded more positive cases during the pandemic than any other school in the United States and moved all courses online during spring and summer in 2020. But it never mandated vaccinations for students or faculty — even as the school’s top pandemic official openly urged them to be — and it relaxed its mask policies even inside crowded classrooms to make them optional starting with last year’s fall semester.

Last month, amid a new wave of omicron variant infections, the university announced that starting Jan. 1 it will no longer publicly track the number of infected students, faculty or staff on campus. Its final tally of infected since March 2020 was 14,522, including a rapid rise in the number of positive cases in the final days it made the data available.

In a scathing profile last summer — the same month Fuchs informed Hosseini he would step down — the influential trade publication Chronicle of Higher Education described Fuchs as, “In Gator Nation, a president who won’t bite.”

In the profile, Fuchs said he could not challenge the political policies of DeSantis, a firebrand Republican Governor with national political ambitions. The Governor has aggressively pushed against mask and vaccine mandates and ordered his administration to pressure local schools to remain open throughout the pandemic.

“I literally don’t have that power,” Fuchs told the publication.

Fuchs said that even if he were to mandate masks or vaccines on Florida’s campus, in opposition to DeSantis, “within hours, another message would go out from someone to everyone, again saying we’ve been informed that there will be no such mandate. We’re part of the state government.”

Also that same August — as the delta variant surged nationally — some colleges on Florida’s campuses told students they were preparing to move all their classes online for the first three weeks of the fall semester. Within hours, Fuchs sent a campus-wide email — after consulting with Hosseini, who was communicating on the issue with the Governor’s office — overruling the decision and mandating that all classes be in-person.

No students, faculty or staff died during that window of time, but the Faculty Senate in November passed an unusual measure — over Fuchs’ objections — expressing no confidence in the administration’s handling of the pandemic on campus. Fuchs had warned that the vote could bring consequences from the state’s capital.

Last year, in a new controversy, the university also initially banned three professors from testifying in court as paid, expert witnesses in a federal civil rights lawsuit against new voting restrictions enacted under DeSantis. The school said their participation was a conflict of interest because they were state employees, although no other public colleges or universities in Florida have enacted similar policies.

Fuchs reversed the decision after a national outcry, but the incident led to a review by Florida’s accrediting body and a congressional investigation by Democrats.

Fuchs promised to soften rules against such testimony in the future, but a federal judge earlier this week said that was dubious. In a ruling denying the university’s request to dismiss a related lawsuit filed by the professors, U.S. District Judge Mark Walker wrote that he had “little doubt that the University of Florida intends to enforce its conflict-of-interest policy in the manner plaintiffs fear.”

On-campus, among students, Fuchs was known for his gregarious attitude and his frequent admonition to have “purposeful fun.” He often greeted students cruising through campus in a golf cart and stopped for selfies with students as they made their way to class.

Fuchs dyed his hair in the school’s trademark orange and blue for a challenge against Florida State University’s president, John Thrasher. Amid the pandemic and reopening of UF’s campus last August, the two Florida schools encouraged students to sign a COVID-19 safety pledge.

Fuchs promised that if 95% of the student body signed the pledge, he would shave his head and dye the left side orange and the right side blue. The total fell short, but Fuchs did it, anyway.

Fuchs previously served as Cornell University’s provost, where he helped the school win a competition to build a new applied engineering campus in New York City on Roosevelt Island. In 2016, Fuchs was nominated by then-President Barack Obama to the National Science Board and National Science Foundation.

U.S. Rep. Debbie Wasserman Schultz, who was highly critical of Fuchs over the recent controversies, said in a statement that the school had benefited “greatly” under his leadership. He helped propel UF to the front ranks of U.S. public universities, was successful at raising money and he helped keep down tuition, she said.

“His personal touch on campus was a warm welcome for many students, like it was for my own children,” said Wasserman Schultz, a Democratic congresswoman from South Florida. “Unfortunately, he also dealt with untenable, unacceptable pressure from the executive branch and their appointees that resulted in policies anathema to the integrity of an academic institution.”

Kristin Bausch reporting; produced by Fresh Take Florida, a news service of the University of Florida College of Journalism and Communications. The reporter can be reached at kristin.bausch@freshtakeflorida.com.