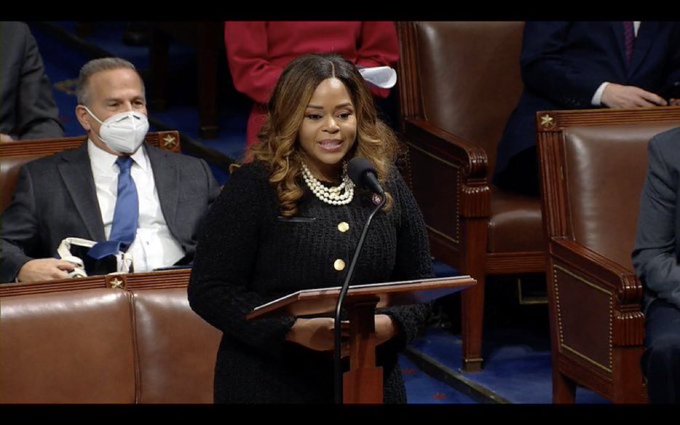 The new Congresswoman's 'People's Prosperity Plan' had been derided as an empty promise during the campaign.

Getting ready to return to her district for the first time as a member of the U.S. House, Rep. Sheila Cherfilus-McCormick said Friday she is working on her promise to deliver every American adult a guaranteed income of $1,000 a month.

Cherfilus-McCormick was sworn in Tuesday as the newest member of Congress, representing Florida’s 20th Congressional District. She is taking the seat of former Rep. Alcee Hastings, who died in office last April.

Less than 48 hours into her truncated term, she said she has been meeting with the Congressional Black Caucus to work on an action plan for salvaging the voting rights bill that died in the Senate this week. And she’s started on an effort to enact her “People’s Prosperity Plan” that was a plank of her campaign.

The plan, if enacted, would mean those currently earning less than $75,000 a year would get the $1,000 per month allowance. During the campaign opponents derided the plan as an “empty promise” that would go nowhere in Congress. It was also the source of a lawsuit, as her former competitor, former Broward County Commissioner Dale Holness, said the prosperity plan amounted to a bribe-for-vote scheme.

“That lawsuit is not going anywhere,” said Cherfilus-McCormick, who is also a lawyer and CEO of Trinity Health Care.

She insists, however, that her prosperity plan is alive and well, even if there wasn’t enough political will to even keep the child tax credit going. She said she’s planning on signing onto U.S. Rep. Ilhan Omar’s bill, introduced in July, that would distribute up to $1,200 a month to adults and $600 for kids.

It might go through community initiative projects, as has been done in other communities like Atlanta, which this month started giving 300 people $500 a month for a year, she said.

“We’re pursuing this, seeing the best practices of all these pilot projects throughout the country,” she said.

She also sees great opportunities in the recently approved $1 trillion federal infrastructure bill for the constituents in her district, which straddles Broward and Palm Beach counties and is made up of many majority black neighborhoods.

“Right now, we have a real opportunity for small businesses to take part in the infrastructure bill — projects that will build the community,” she said. “There’s a lot of work to be done.”

Cherfilus-McCormick will be running again later this year in the midterm elections after winning the Special Election to fill the seat earlier this month.