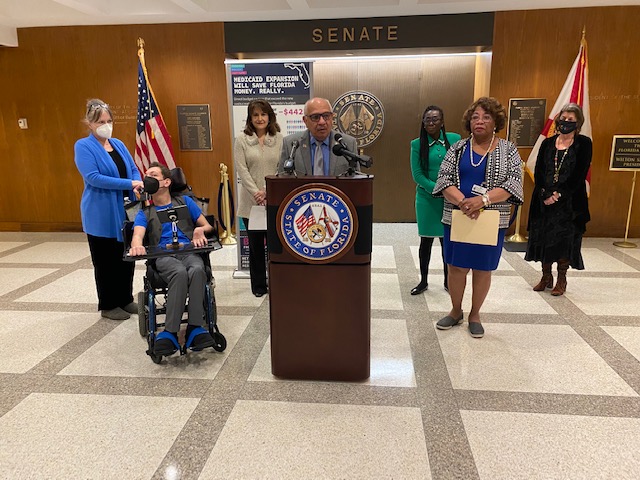 Florida Democrats — constantly rebuffed by the Republican majority for years now — are mounting yet another effort to expand Medicaid coverage to uninsured childless adults.

But instead of trying to sway GOP legislators to finally act, they are beseeching them to at least let voters weigh in on the issue at the polls during the upcoming election.

The lawmakers say Florida is leaving $200 million a year on the table by refusing to expand Medicaid for lower-income childless adults as authorized under the federal health care law commonly called Obamacare.

Alternatively, the Democratic lawmakers said, their GOP peers in leadership positions could schedule hearings on SB 1504 and HB 27, which would expand Medicaid without voter approval.

Jointly funded by the federal and state governments, Medicaid is the safety net program for the state’s poor, elderly and disabled. There were 5,035,950 people enrolled in Florida’s Medicaid program as of Dec. 31, according to the latest available data. Most of them, nearly 4 million, are enrolled in Medicaid managed care programs.

Florida is one of 12 states that have not expanded Medicaid to uninsured childless adults as allowed under the Affordable Care Act. The Florida Legislature has not seriously considered a Medicaid expansion since 2015, when the Florida Senate’s push to expand the safety net program to childless adults derailed the regular Legislative Session.

But the federal government included a number of incentives in the American Rescue Plan for the 12 holdout states to expand Medicaid.

The increase is in addition to the 6.2% bump the state has been receiving to help fund the program since the onset of the COVID-19 pandemic.

Taddeo said the state would gain $3 billion if it expanded Medicaid.

While Florida didn’t take advantage of the Medicaid expansion incentive in the American Rescue Plan, the Legislature did agree to tap into two other Medicaid incentives included in the federal law pushed by President Joe Biden‘s administration.

House Speaker Chris Sprowls pushed the state to access federal funds to extend the length of time that postpartum women can tap into Medicaid benefits. In nonexpansion states, coverage is limited to two months. The federal law authorized postpartum women to receive the benefits for 12 months and provided additional funding.

It was a top priority for Sprowls during the 2021 Session.

It was approved late last year, and the state is beginning to distribute some of the funds to the direct-care service providers who work with people with intellectual and developmental disabilities.

This is not the first year that Taddeo, who is running for Governor, has pushed for voters to weigh in on Medicaid expansion. She said she’s hopeful this year will be different.

“One would hope that in an election year, (our elected officials) would want to take care of Floridians,” Taddeo said.