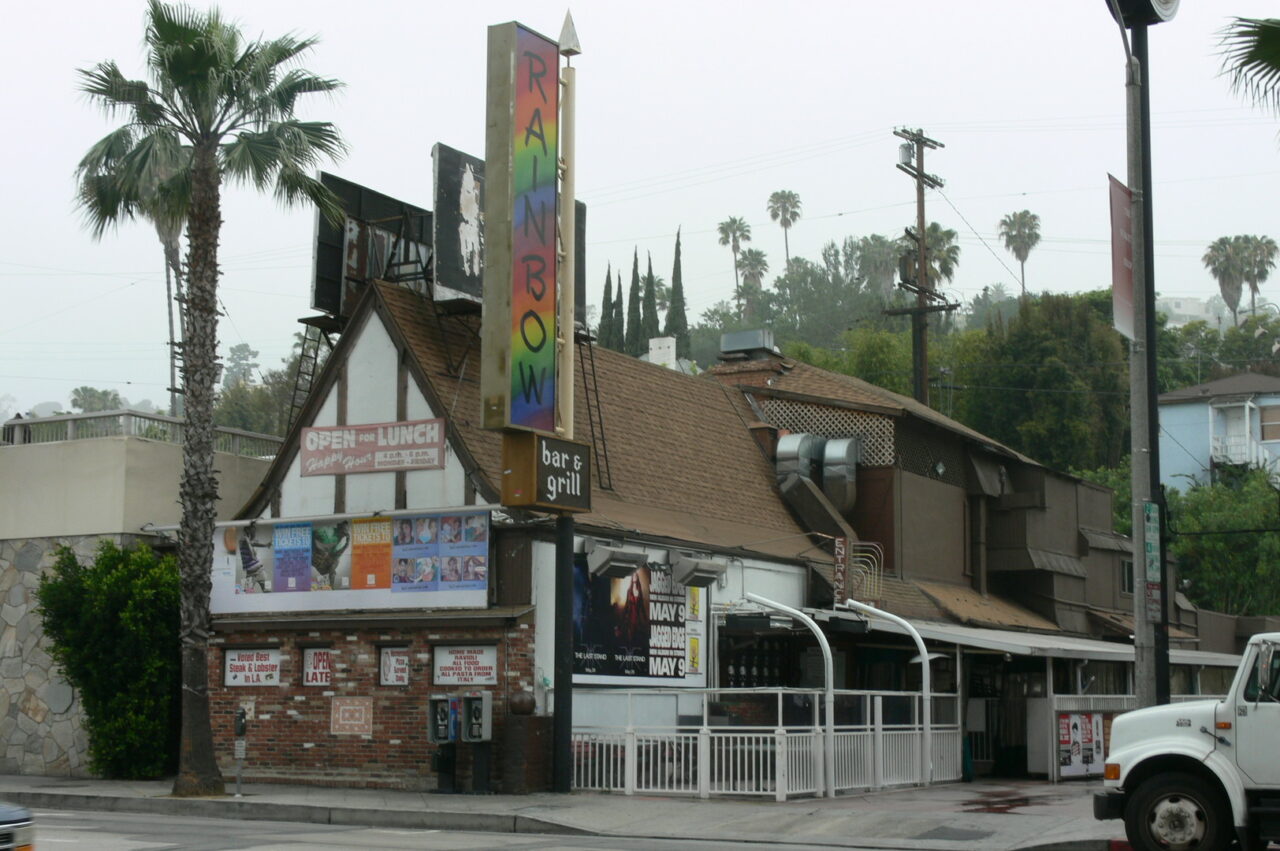 Who knows what scene is next? That is up to the next generation.

In the late 1970s, something was beginning to change in the Los Angeles music scene.

Punk rockers, skinny ties, and New Wave were the norm in Hollywood and 4 guys named, Dave, Alex, Eddie, and Michael were about to turn that world upside down.

They formed a rock band and forever changed the face of rock and roll and the Sunset Strip when they became Van Halen.

By the early 1980s, Van Halen was huge worldwide (their debut album sold 10 million copies earning it a Diamond Certification from the RIAA).

And for the next 10 years, the era of hard rock music (West Coast party metal, glam rock, hair metal, etc.) they started (with a few others) would reign supreme until it spontaneously combusted, stomped out by Nirvana and Grunge music.

The rock clubs in LA in the 80s were The Rainbow, The Whiskey, Gazzarris, The Troubadour, The Country Club and the bands that followed were Mötley Crüe (the kings of Los Angeles), Dokken, Ratt, Quiet Riot, Poison, LA Guns, Faster Pussycat, Warrant, WASP, Great White and, of course, the one-and-only Guns N’ Roses.

These bands first took over LA then the nation and the world. Selling out arenas, ruling MTV and the radio, and on the cover of every magazine.

I had a view for this scene right from LA. Unfortunately, my LA was Lower Alabama.

From my room in Dothan, I read stories of these bands touring the world in magazines like Metal Edge and Circus. I tried to play these songs on my guitar (unsuccessfully) and my massive cassette collection included all these bands, plus live shows.

Remember tape trading? You could mail someone a few tapes whose address you would find in the classifieds, and they would send you back the shows they had. It was a spectacular hobby.

I still have some 1986 (pre-Geffen record deal) extremely rare GNR stuff that I need to get online. I loved it all, and I saw all these bands live on these huge metal tours all over the south; (Mötley Crüe/ GNR 1987 tour, Ratt/Poison 1986 Tour, to name a couple of favorites) but wouldn’t it have been cool to be there from the beginning as shown in the Mötley Crüe movie “The Dirt?”

For a deep dive into the scene, let Sam Dunn from Metal Evolution continue the story:

Fast forward to 1993; I was hanging out in Athens, Georgia, and my friend Cameron Williams says we should go to the Chi Phi house at UGA that night to see a band who was creating a buzz around the south.

We walked in and a man was playing an acoustic guitar (his name was Dave), and another guy was playing a fiddle, another a sax and there was a drummer.

It was not the normal two-guitar attack I was used to. And, you know what? it rocked.

We stayed all night and that loved that band from that night until present day, they are called the Dave Matthews Band. About a year later, we caught their club shows in Florida and then they signed a major label deal with RCA and were off to super fame which continues today:

Back in Gainesville, similar things were happening. Every so often, a long-haired guy named Edwin McCain was playing in town. One night, he played the Irish bar Dirty Nellies. Sister Hazel was just starting to play gigs and they played my fraternity house several times and every other possible spot in town. They gigged relentlessly and their independently released first album was out-selling major artists locally. What came next was Universal Records scooping them up and releasing their debut album Somewhere More Familiar, which was platinum certified (1 million units sold) and produced the #1 hit “All for You.”

I had the honor of working with those fellas for several years, you can read about it the intro to my book that Hazel singer Ken Block wrote — “Professionally Distanced.”

In the next couple of years, the Tallahassee-based Creed would follow. I saw them play to three people at Rickenbacker’s in Gainesville when they first started. Within a year, I moved to Atlanta and caught them again at the Chameleon Club playing to 100 people. Then, a few months later, they were selling out the Roxy Theater to 1,000 folks; then 3,000 at the Tabernacle, and then 15,000 at Phillips Arena, all within two years. Insane.

Tabitha’s Secret also came out around this time from Florida, which became Matchbox Twenty and blew up (debut album Diamond Certified). The same for Less than Jake, and let’s not forget super-star Darius Rucker and Hootie and the Blowfish, who was also in the process of selling a diamond record (10 million units) with their Atlanta Records debut “Cracked Rear View.” It was a pretty wild time to see all these bar bands get their start, play local gigs all over the south, sign deals and become wildly successful. And just as grunge (Nirvana, Pearl Jam, Soundgarden, etc.) knocked out hair metal, this new 90s rock was on top and pushed the Seattle sweethearts aside. This is clear when you look at the Diamond albums in total, there are less than 100 in the history of records and this pop-rock era pushed out several of those.

I enjoyed it so much I figured I would make it my job. Next thing you know, it’s 1999 and I’m walking in The Rainbow in LA for a beer (or two).

This is the on the Sunset Strip that I had read (about 6,000 times); I was accompanied by a band I was working for who had just signed a deal with Capital Records.

Was it what I expected? Yes, and more.

Rock legend Lemmy Kilmister was sitting at the bar, holding court, and mumbled something profane to me when I walked up (awesome). Gold records were all over the walls.

We had a blast; it became one of our go-to hangouts while the band recorded their album.

Our state is rich in just about everything, and music is certainly on the list. Those bands that I mentioned from LA and from Florida all are still out there working, most are not playing arenas, but GNR, Dave Matthews, and Mötley Crüe are.

Most are just working hard — like all of us. Quiet Riot, Sister Hazel, Edwin, Ratt, Great White, Dokken, all still plugging away and that is just fantastic.

Being a part of that 80s metal scene as a fan was awesome and being part of the music business as a “professional” was awesome times two. Who knows what scene is next? More electronica?

That, my friends, is up to the next generation, as my music scene these days is The Allman Brothers on Spotify by the firepit.

Take it away Dickey and Gregg in your tune “Seven Turns” …

“Runnin’ wild out on the road, just like a leaf on the wind. How in the world could you ever know, We’d ever meet again?”

previousChris Sprowls: For first time ever, Florida is tackling illiteracy at the doorstep