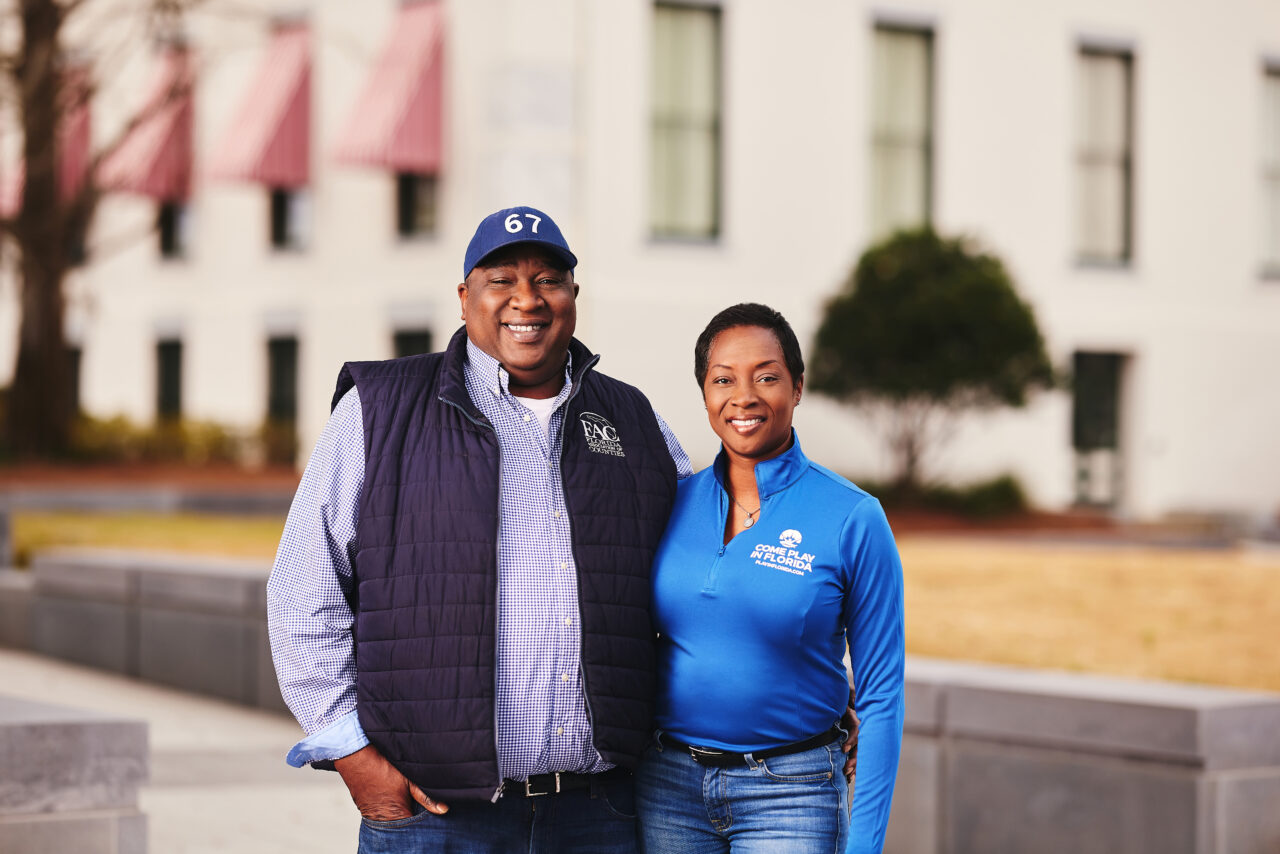 ‘Focusing on friendship has been something that has definitely been helpful for us.’

Although their jobs are different, Angela and Davin Suggs’ work has something very much in common — both have positions that touch the entire state of Florida.

“We both serve all 67 counties and now 22 million people,” Davin said. During Session, he spends time at the Capitol following issues of importance to his association, but in the off months, he’s on the road.

Angela constantly travels within Florida and to trade shows to promote sports — from the Super Bowl to All-Star Games — in the state. Add into the mix a 15-year-old daughter who plays competitive high school softball, and you’ve got a potential scheduling nightmare.

But the Suggses are each other’s best fans, and they make their schedule work with a whole lotta teamwork.

“We’re always both excited for each other. We’re trying to inspire each other and then be the rock for one another at the same time,” Davin said. “In our case, two really is better than one; Angie says it’s true teamwork.”

Practically, they try to take advantage of times when they’re in proximity and schedule a date night.

“Early on, we decided we both have to stop at the same time, even if it’s just for an hour,” Davin said.

Angela concurs: “Focusing on that friendship has been something that has definitely been helpful for us.”

Many a planned rendezvous has been interrupted by work for the couple over their 18 years of marriage, but advice from another couple — to treat each other with the grace you would extend to friends — has served them well.

When a friend has to cancel or arrives late, “you’re OK with that because that’s your friend, that’s your buddy,” Angela said. “You gotta look at your spouse the same way and just know you’re all trying to get to the same destination. We have that mutual respect for each other.”

Both learned a lesson on how to work more efficiently during the pandemic.

“One thing that helped me out of COVID is, even my older county commissioners, a lot of people learned how to use Zoom and became comfortable with it,” Davin said.

In conjunction with Florida Tourism Day in January, Angela’s Sports Foundation roundtable event held in Tallahassee attracted about 30 representatives from partner communities, and another 56 participated online.

Valentine’s Day has been interrupted by work for the couple over their 18 years of marriage, but going out for dinner is not on the agenda, at least for Davin.

“Hands down, my favorite restaurant is right here at home. Angie is an amazing cook. Just out of sight. She cooks the taste; there’s no recipes,” he enthused. “I can sneak home-cooked meal in, whether it’s a Sunday when she’s here or … the holiday season.” Angela estimates she assembled 32 items for family and friends over Thanksgiving and Christmas last year.

In a twist of fate, Davin’s birthday is Aug. 4, and Angela’s is Aug. 5. When he proposed, they agreed the ideal wedding date would be Aug. 6 to keep the celebrations rolling. They have since discovered they’re partied out. “Of course, we celebrate his birthday,” Angela said. “Then he tries to outdo me, and then by our anniversary, we’re like “about those dinner plans. Don’t you just want wings?’”

previousLove in The Process: Kristen & Mike Grissom — A life filled with politics, laughter