Lawmakers ultimately ignored a submission from Gov. Ron DeSantis and an expert he called on to testify.

A House redistricting committee moved forward with a Florida congressional map that largely preserves a minority seat in North Florida. More importantly, the committee made clear that submissions from Gov. Ron DeSantis’ office will not influence cartography in the Legislature.

Democrats continued to raise objections to significant changes to a Central Florida district that could make it less likely to elect a Black candidate. But the hearing most significantly put to rest the question of whether a district spanning from Tallahassee to Jacksonville will be preserved.

Despite testimony from an expert flown in by the Governor’s Office, lawmakers held to cartography that largely retains a configuration to Florida’s existing 5th Congressional District.

“The process requires us to follow the law,” said Rep. Tyler Sirois, the Republican subcommittee chair. “There has been noise outside of our process dealing with the congressional map. I would encourage all members to put that noise aside. Those external influences need to stay external.”

He said that means Representatives must put their own preferences aside and prioritize the legal guidelines laid out by the Florida Supreme Court, including protecting the ability of minority communities to elect Representatives of their choice.

No consideration was given to maps submitted on the Legislature’s redistricting website from the Governor’s Office. The most recent one (P 0094) includes 20 of 28 districts where a majority voted for Republican Donald Trump, according to outside analysis. The Governor’s map also disposes of a north Florida-spanning district and has no minority access seats north of the Orlando area.

DeSantis has said he will not sign any map with an “unconstitutional gerrymander,” and officials within his office have decried the existing CD 5, represented now by Democratic U.S. Rep. Al Lawson, as just that.

Robert Popper, a legal expert with the conservative Judicial Watch, testified at the subcommittee hearing. He said federal law prohibited a district like Lawson’s. “It will torpedo the ability of Florida to submit a set of districts it can call narrowly tailored,” he predicted.

That’s despite the district being created by the Florida Supreme Court in 2015.

Rep. Kaylee Tuck, a Lake Placid Republican, asked if DeSantis’ office requested Popper to testify. Popper told the committee he was, but initially said he was not compensated to testify. Then Rep. Chuck Clemons, a Newberry Republican, asked who was footing Popper’s travel into the state from Maryland. Popper clarified the Governor’s Office would reimburse the price of his travel and hotel.

Popper also said he had communicated with attorneys at Holtzman Vogel Josefiak about the process, but prepared his testimony on his own. He did arrive with a certain level of authority as co-creator of the Polsby-Popper test, a measure of compactness frequently used in court to determine the legality of district designs. The analysis is one of three tests both chambers of the Legislature have used to grade each district on maps produced in the redistricting process.

But he acknowledged his expertise lies in federal law, and he declined to discuss how the Florida Supreme Court would apply the Fair Districts amendment in the Florida Constitution to maps produced.

Cecile Scoon, president of the League of Women Voters of Florida, used her own testimony to question if Popper had any legal argument to support the argument that federal courts might trump the state court’s reading of its own constitution. She noted U.S. Supreme Court opinions have pointed to Florida’s Fair Districts amendment as a model for other states to follow.

Beyond that discussion, much of the debate among lawmakers around the map centered around three congressional jurisdictions, Florida’s 3rd, 10th and 26th Congressional Districts as proposed.

CD 3, the district on the House map analogous to Lawson’s current CD 5, was called into question by Rep. Tom Fabricio, a Miramar Republican. He asked staff to discuss the low compactness scores for the proposed seat, which have the lowest average measure of any of the 28 on the map.

“Would one of the other considerations be unnecessary appendages?” Fabricio said, then identifying the inclusion of Gadsden County in proposed CD 3 as seemingly unnecessary. “It just seems that it went through a very slim sliver of land,” he said.

Leda Kelly, staff director for the House Redistricting Committee, said cartography firstly must prioritize protecting minority communities’ ability to elect a candidate of their choice. Gadsden County is the only majority-Black county in Florida, and its inclusion in a Black performing district made sense in terms of protecting access.

Ultimately, Fabricio joined with other Republicans in voting for the map to move forward. He was the only Republican to ask pointed questions about the configuration. Notably, House leadership late Thursday stripped Republican Reps. Mike Beltran of Lithia and Jason Fischer of Jacksonville of their seats on the subcommittee because the Governor’s most recent map well-positioned them individually to run for open seats in Congress.

Democrats’ chief concern, cited by several lawmakers before casting votes against the map, centered around the reconfiguration of CD 10. While the Senate considers that a Black-performing district, the House does not. The House cartography shifts the district from a Black voting age population of 26.7% under its existing lines to 25.32% under the draft proposal.

“The House is not in the same position as the Senate with that district, and I know we can get to the middle and find a common ground with that,” said Rep. Tracie Davis, a Jacksonville Democrat. She praised Republican leadership in the House for keeping its plans for CD 3 despite pressure from the Governor, but expressed hope the Senate plan would prevail with the Orlando area seat.

Lawmakers have avoided discussing the partisan outcomes from maps. The House map effectively combines parts of Florida’s 7th Congressional District with turf now in CD 10. That results in a decrease from three Democrat-leaning seats in the Orlando area to two, according to a partisan performance analysis by MCI Maps. Notably, CD 7 and CD 10 today are represented respectively by U.S. Reps. Stephanie Murphy of Winter Park and Val Demings of Orlando, both Democrats. Neither is seeking re-election, with Demings instead running for Senate and Murphy announcing she would not run shortly after the House published a draft that effectively erased her district.

The other issue Democrats jumped on was the configuration of CD 26. The seat is analogous to the existing Florida’s 25th Congressional District, represented now by U.S. Rep. Mario Díaz-Balart, a Hialeah Republican.

Seemingly in rhetorical response to concerns raised by DeSantis about Lawson’s district, Democrats questioned the compactness of CD 26 on the draft maps. Rep. Dotie Joseph, a North Miami Democrat, questioned the district running from Collier County to Miami. “Was that necessary?” she asked. “I see that it crosses the large unpopulated stretch of the Everglades between, it looks like, Miami-Dade County and Collier. Would we consider the Everglades in this area, a major geographic boundary?” she said.

Kelly said that seat too was a minority access seat. Miami’s Cuban American population has historically supported Republican candidates, including three Miami Republicans from that community who serve in Florida’s congressional delegation now.

House Redistricting Committee Chair Tom Leek said on the House floor that outside counsel had funded a racial polarization test, but the results have not been made available to lawmakers. That marked a sensitive point in the meeting. Sirois said the data isn’t in the House’s possession to give.

Unlike legislative maps already approved by the Legislature, the congressional lines will go to the Governor to sign or veto. There is no automatic review by the Florida Supreme Court, but outside bodies can challenge the maps. 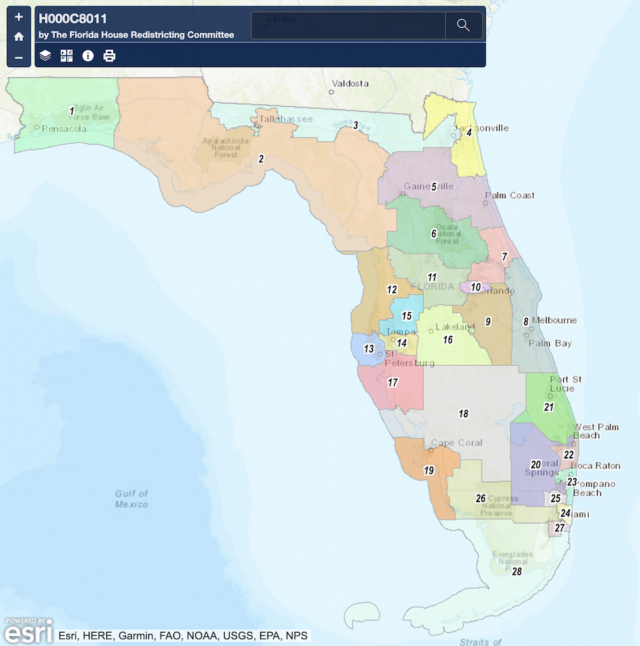