'Enriching your political coffer before a 27-million-dollar vote is most revealing.'

Dailey received more than $20,000 from donors connected to FSU in January, the month before next week’s vote to finalize a $27 million Blueprint Intergovernmental Agency allocation to FSU to help fund repairs to Doak Campbell Stadium. The Leon County Democratic Party passed a resolution earlier this week asking all members of the Blueprint board to vote on the decision to return donations they received from people in leadership at FSU or FSU-related organizations.

While speaking to the Tallahassee Democrat and other members of the press Wednesday, Dailey said more than 100,000 people are connected in some way to the university, and to stifle their right to donate to political campaigns would be voter suppression.

“To suggest they should not participate in the democratic process is voter suppression and I will seriously never ever support that,” Dailey said.

Proctor’s letter specifically called out that quote, saying that being asked to return the money is not voter suppression and Dailey should apologize.

“Enriching your political coffer before a 27-million-dollar vote is most revealing,” Proctor wrote. “Campaign greed and voter suppression are spectacularly different.”

In an interview with Florida Politics, Proctor said comparing the resolution’s request to voter suppression, something historically used against Black Americans, is insulting to him.

“Voter suppression is born out of lynching, bombings, murders and other repressive behaviors by terrorist organizations or governments against the rights of Black people to vote,” Proctor said. “John Dailey saying (not being able to) take White people’s money is voter suppression alarms me and offends me.”

Dailey declined Florida Politics’ request for a statement about his comments regarding the donations and Proctor’s letter.

In Dailey’s comments to the media, he said he would bet other elected officials have received donations from people connected to FSU.

“I think that everybody who has run for office has probably received donations from FSU alumni, booster supporters, maybe those that work at the university, I have no idea,” Dailey said. “I would be willing to bet if you look at everyone’s financial disclosure, we are a college town, and we are proud to have the support of our community and we are proud that the process is transparent and you know exactly who donates and how much they donate to each campaign.”

The only board member who backed the allocation to get any donation from those four groups was City Commissioner Dianne Williams-Cox, who received one $500 donation from a Seminole Booster.

Proctor, who has voted to support the funding allocation to FSU, told Florida Politics the donations cast a shadow over the vote next week, especially due to public perceptions about money in local politics following the Scott Maddox case.

“The optics look like it’s a political shakedown for money before a vote. I am not saying that it is, I am talking about optics,” Proctor said. “I don’t like walking into a room looking like I have been bought already.”

The letter also criticized Dailey for not making an appearance at a rally centered on voter suppression that was hosted by the Tallahassee Branch NAACP at the Capitol Thursday. The city’s four commissioners were in attendance, making Dailey the only voting City Commission Member absent.

While Dailey was not present at the rally, he did attend a Community Police Relations and Justice Forum about gun violence hosted by the Tallahassee Urban League Thursday evening that included local law enforcement and social justice and community group leaders. 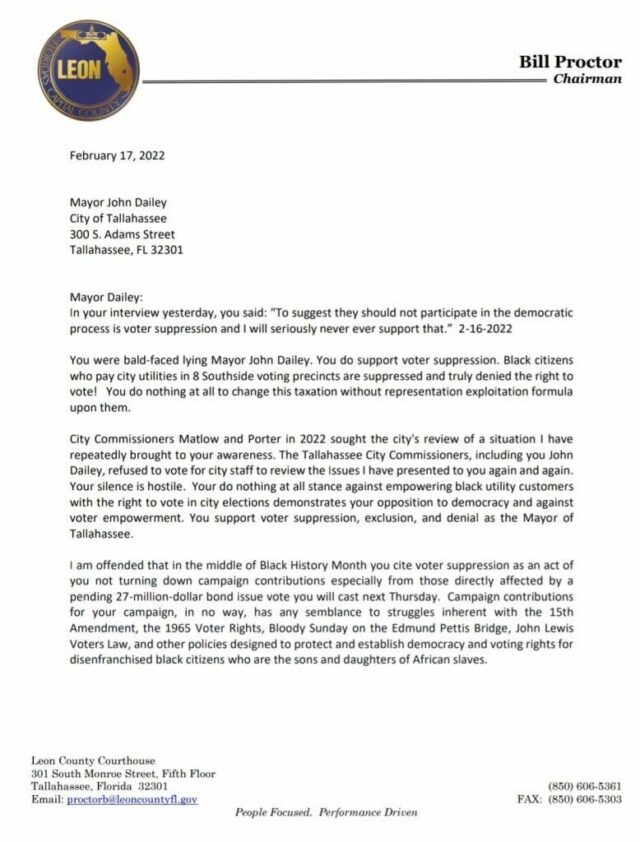 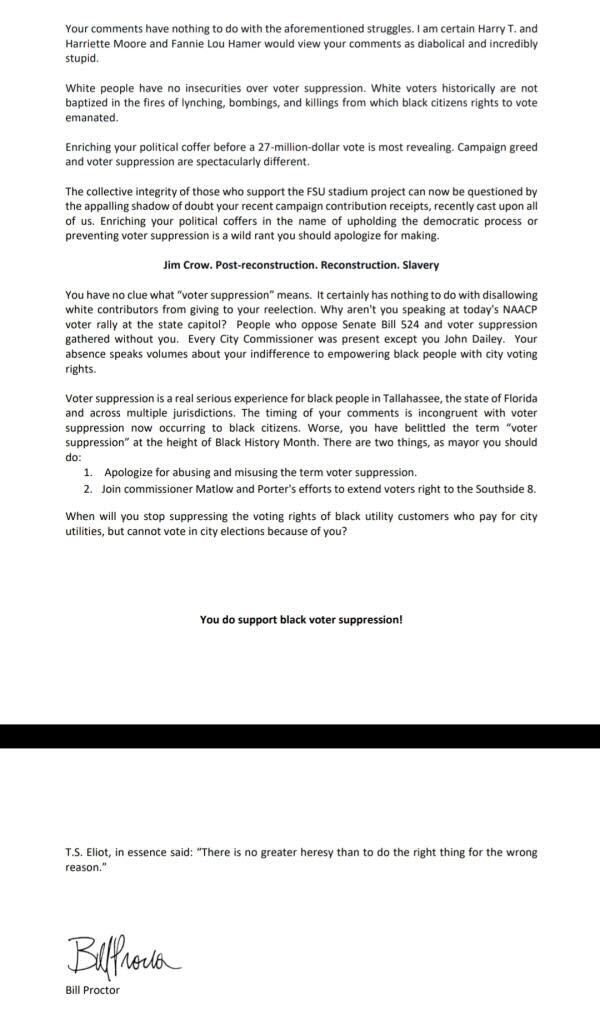 Proctor’s letter also accused Dailey of supporting voter suppression by failing to act to annex eight predominantly Black Southside districts into the city, an issue Proctor has been pushing for for over a year.

The eight districts are currently on the city’s utilities, but are not within city boundaries. Therefore, residents in that area cannot vote in city elections and do not have to pay city property taxes. However, 35% of the money collected for utilities goes into the city’s general fund, Proctor said.

“You do nothing at all to change this taxation without representation exploitation formula upon them,” Proctor wrote in his letter to Dailey.

On Jan. 26, the City Commission voted 3-2 against a motion by Commissioner Jeremy Matlow asking city staff to reach out by phone or mail to residents in the district to solicit feedback about pursuing the annexation. Dailey and Commissioners Dianne Willliams-Cox and Curtis Richardson voted against the motion.

Dailey did not say during the meeting why he opposed the motion. Williams-Cox said she believes annexation should be resident-driven, and she hasn’t received requests from people in the eight precincts area about it. She also said residents in that area voted on being annexed 20 years ago and rejected it.

Proctor told Florida Politics that Dailey has not met with him in a setting where the precincts could be discussed since he became chair in November, although one meeting was rescheduled due to the Mayor getting COVID-19. He said he thinks Dailey has not acted because he won his last election with 51.4% support, a margin he believes could disappear if the predominantly Black precincts are added.

“More Black people voted for his opponent,” Proctor said. “Dailey is afraid of Black voters because they don’t like him.”

Dailey also declined a request to speak about the eight Southside voting precincts.

nextHouse subcommittee moves forward with its own congressional redistricting map