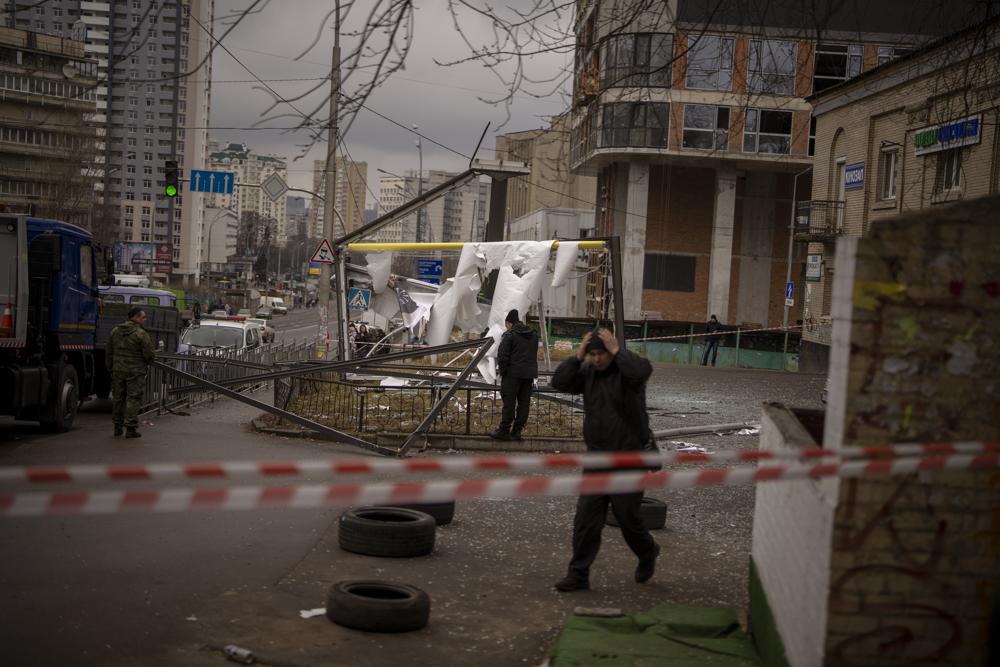 Russian President Vladimir Putin has begun a so-called “special military operation” in Ukraine, utilizing airstrikes and shelling, with explosions heard in Kyiv. Western leaders warn the attack could threaten Europe in a way not seen since World War II.

President Joe Biden is weighing his next move after denouncing the attack as it began. As sirens go off in Ukraine, Florida officials are reacting to the invasion and denouncing Putin’s actions.

“(Ukraine) is outgunned and outmanned. But they are brave (and) tough fighters and as the world will soon learn they have already inflicted damage on Russian invaders.”

“Freedom is under attack in Ukraine. Pray for the innocent lives in danger.”

“Russian President Vladimir Putin is a murderous dictator who has invaded a sovereign democracy in an effort to recreate the glory days of the USSR. This is an unprovoked war of his choosing, and it will cause tremendous loss of life, destruction, and suffering. This aggression will be met with harsh, punishing sanctions designed to cripple the Russian economy. Bullies like Putin only respect power. The U.S., European Union and our allies will meet these transgressions with fierce, unyielding pressure, as we stand in solidarity with Ukraine and her people.”

“A career in law enforcement taught me that the only thing a bully understands is strength. The Russian invasion of Ukraine is an outrage. It is unprovoked, the act of a coward, despite attempts by Russia to falsely manufacture an excuse for war. Now, we must show President Putin our nation’s unwavering resolve, and impose the toughest sanctions in history against the Russian government, oligarchs, and enablers.

“We must keep Americans in the region safe, prevent further escalation, and work with our European allies to support the Ukrainian people with arms and humanitarian assistance. Putin and his corrupt regime must pay a personal price for the lives that he is taking and the chaos he is causing. I have led efforts in Congress to target Putin, the oligarchs who support him, and their criminal financial networks. I call on Congress and the administration to continue these efforts. Russia’s corrupt leaders must face the penalties for starting a war of conquest.”

“My prayers are with the people of Ukraine as they watch violence unfold on their streets and continue to grapple with a violent invasion led by a power-hungry, unstable leader,” Bilirakis said.

“Sadly, this tragedy may have been avoided if President Biden would have backed up weeks of tough talk with serious action. This humanitarian and political crisis is the latest example of how weakness on the international stage only serves to embolden our enemies. The international community must now send a strong and clear message to Putin and other authoritarian regimes that unprovoked attacks on a sovereign European nation will have swift and severe consequences. The violence must stop immediately, and we must make strategic changes that will deter future aggression. For example, President Biden must reverse his disastrous energy policies, unleashing domestic energy production so the U.S. and her allies are no longer dependent on foreign adversaries, like Russia!”

“The violent attack on Ukraine and innocent civilians by Russian dictator Vladimir Putin will be met with the harshest sanctions to ever emanate from the free world and defensive military support for Ukraine and Eastern Europe. Freedom-loving people across the globe will see a strong, coordinated response from the United States, NATO and our allies. While President Biden and world leaders work together to stand up for Ukraine and democracy, Americans should unite in support of our democratic ideals and freedom and security for all people. My heart remains with the people of Ukraine as they face this unprovoked attack.”

“Last weekend in Munich, we stood together with our European allies in support of Ukraine’s sovereignty, territorial integrity, and democracy and committed to swift and severe sanctions. Russia invaded Ukraine. The time for punishing and unified sanctions from all of us is now.”

“I am calling for the House Foreign Affairs Committee and Senate Foreign Relations Committee to hold an immediate, emergency joint meeting to implement policies to isolate Vladimir Putin and force him to remove his forces from sovereign Ukraine. I met with Afghan refugees today. They saw their lives turned upside down in a matter of days: girls banned from school, families uprooted and futures uncertain at best. Now, with Putin’s invasion, the Ukrainian people are facing a similar fate.

“There’s no doubt that weakness leads to war. Abandoning the policies of peace through strength, border security, energy independence and a self-reliant supply chain was not in the national or global best interest, and it has led to catastrophic foreign policy failures as well. Nonetheless, our country must now be united in helping our leaders find the strength needed to confront this challenge because China, Iran and North Korea are all watching, and a premeditated, unprovoked act of war cannot stand.”

“My heart aches for the proud people of Ukraine. You are not alone. America and all freedom-loving countries around the world stand with you. Russia will pay a heavy price.”

“Putin’s aggression should be met with strong sanctions by all Western Democracies. NATO nations must unequivocally condemn Russia’s actions and apply pressure, including by realigning operations from its secure nest in Brussels to at-risk NATO frontline nations in the east. Weakness and vacillation now will only stimulate more aggression by Russia and their allies, China and Iran.”

“We condemn Russia’s unilateral, unjustifiable and disgraceful attack on Ukraine. This is the greatest threat to peace in Europe since WWII. I stand with ⁦(President) Biden in levying all possible Russian sanctions and (defending) our NATO allies in the region.”

“Putin’s actions must be met with severe consequences. His prior actions leading up to this moment also should have been met with severe consequences, but were instead ignored by President Biden and his completely incompetent administration. Our allies and adversaries alike see that U.S. leadership is nowhere to be found. First, the Biden Administration steps aside for the Taliban, now Russia. The Taiwanese are rightly very worried. Meanwhile, Biden is working to give Iran a pathway to nuclear weapons. Under President Trump, we had peace through strength. Now, we have war through weakness. Today we see the result of the Biden Administration’s blunders. I’m sending prayers and strength to the Ukrainian people.”

“Vladimir Putin’s invasion into Ukraine violates the very fabric of international norms and is a direct threat to our Western values. The United States is now on the verge of losing a second democratic partner in just six months while our global adversaries have expanded their influence of evil around the globe,” Waltz said.

“Now is the time for President Biden to take punitive actions to address Russia’s threat to the West. The United States must publicly support Ukrainian resistance efforts should Russia succeed in its military invasion. Putin must understand the costs of invading a sovereign country and know that this will turn into a bloody quagmire — much like that of the Soviet Union’s occupation of Chechnya.”

“Yesterday, the White House announced new sanctions on Russia for their invasion and de facto annexation of Ukrainian sovereign territory. President Biden needs to be strong, forceful and clear-eyed — now is the time to impose real and significant economic and diplomatic costs on Russia for its invasion, not slaps on the wrist. Like it or not, the U.S. is a signatory to the Budapest Memorandum in which we, along with the U.K. and Russia, provided security assurances to Ukraine in exchange for giving up their nuclear weapons after the collapse of the Soviet Union,” Webster said.

“Failing to match words with action will not only fail to deter Russia from further action, but will send the signal of another broken promise – and a weakened U.S. on the global stage after the disastrous consequences of our broken promises in Afghanistan. Our adversaries across the globe, including China and Iran, are watching. Just today, the China Communist Party (CCP) mouthpiece clearly indicated that the CCP will take Taiwan one way or another, echoing President Xi’s previous remarks. These bellicose statements are emboldened by Putin’s actions in Ukraine and the West’s tepid response.”

“This morning, we woke to a different reality, watching Russia’s unprovoked invasion of a free and democratic Ukraine, shattering decades-long peace in Europe. These acts of war are greatest felt by the people of Ukraine, who we must stand with and are praying for as their personal safety and way of life are now under assault by an authoritarian regime. We must unite as a state, nation, and global community to condemn these actions of war from Vladimir Putin. We must send a strong message that we will not allow aggressions against democracy anywhere.”

“Last night, halfway around the world, a war began — the total violation of a nation’s sovereignty because violence was chosen over the peace of the political process. We are blessed to live in a country where we can use our words and the principles of civil discourse to discuss our differences,” Speaker Sprowls said to House members ahead of Thursday’s floor session.

“Let us not forget the blessings we have to address our differences without malice, personal attack or ill intent. It is that blessing that unites us all as Americans.”

“As one of 42,000 Floridians of Ukrainian descent in Florida, and, I’m told, the only Ukrainian member of the Florida Legislature, I would ask my friends and fellow Floridians pray for the freedom-loving citizens of Ukraine.”