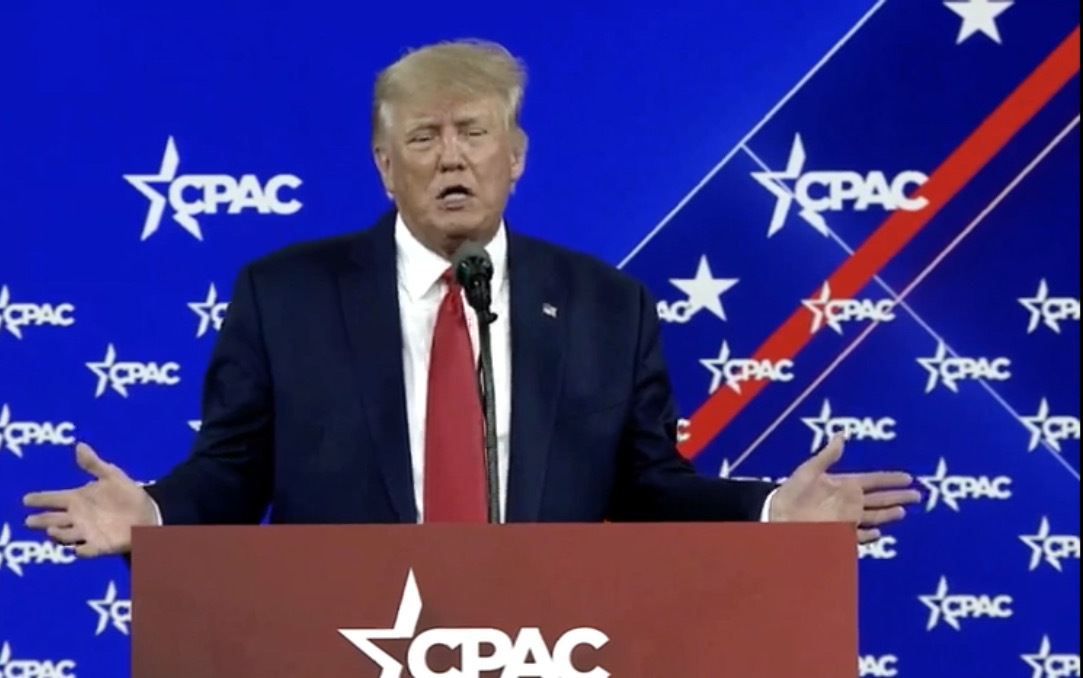 Former President Donald Trump crowned himself GOP king at CPAC on Saturday, delivering a speech before a capacity crowd that featured all the makings of man eager to retake the White House

“We did it twice. And we’re going to do it again,” Trump said to a roaring crowd inside the Rosen Shingle Creek Hotel in Orlando.

Trump’s roughly 90-minute speech spanned across a slew of hot topics, splitting time between cultural and political issues almost sure to animate the GOP base.

He blasted President Joe Biden, decrying him as a weak and ineffective leader. He lamented the Southern border crisis, lambasted the “fake news” media and decried “radical” Democrats . He also disputed the outcome of the 2020 Presidential Election.

Trump maintains voter fraud cost him the election against Biden, an assertion backed by little — if any — evidence. He described the election as the “crime of the century.”

“We had it done,” Trump added. “The election was rigged.”

Now 75 years old, Trump waltzed onto stage and garnered a long welcome from supporters. “Proud to be an American ” played over loudspeakers as fans chanted “USA,” among other rally cries.

Several Florida lawmakers attended the event including Republican Reps. Anthony Sabatini, Webster Barnaby and Jackie Toledo, among others. CPAC is hosting a state lawmaker reception after the event.

Ahead of the event, GOP prognosticators regarded Trump and DeSantis as the top attractions of CPAC, a place where candidates can measure their presidential appeal among supporters.

But while DeSantis supporters showed in force, Trump’s appeal among GOP voters remains firm. Vendors at CPAC stocked tables with Trump memorabilia, leaving little room for trinkets touting the Florida Governor. The roads outside of the venue lined mostly with pro-Trump flags, signs and collectables.

CPAC will release a straw poll taken among attendees on Sunday, but expectations are Trump will lead again this year, with DeSantis a second choice.

“We are a long way from being done,” Trump said as supporters cheered “four more years.”

Unlike DeSantis’s CPAC speech, Trump leaned into foreign affairs. He criticized Biden’s handling of Afghanistan and expounded on the Russian invasion of Ukraine and China’s rise into a superpower.

Trump decried the invasion as an “outrage” and an “atrocity.” He vowed to pray for Ukrainians, saying Russian Dictator Vlamdamir Putin would’ve left the small nation alone if he were still in office. DeSantis, a presidential contender, has yet to speak on the issue.

“I stand as the only President of the 21st century under whose watch Russia did not invade another country,” Trump said.

Notably, DeSantis did not appear at Trump’s speech, an absence amplified when coupled with the fact his daily schedule showed no other scheduled events.

What’s more, DeSantis did not mention Trump in his speech and Trump left DeSantis out of his.

While media and prognosticators forecast a looming clash between the pair, other conservative leaders think otherwise.

“I didn’t know they were running against each other,” Fox News Host and conservative radio giant Mark Levin quipped at Florida Politics ahead of the speech when asked about a possible face-off. “As long as we get a conservative.”

National conservative activist Scott Pressler, meanwhile, thinks DeSantis will not challenge Trump and may instead rise up as a successor. CPAC recognized Pressler’s voter registration efforts on stage Saturday.

“DeSantis is smart man,” Pressler said when asked of the speculation. “He would not run against the President of the United States.”

nextWinner and Loser of the Week in Florida politics — Week of 2.20.22