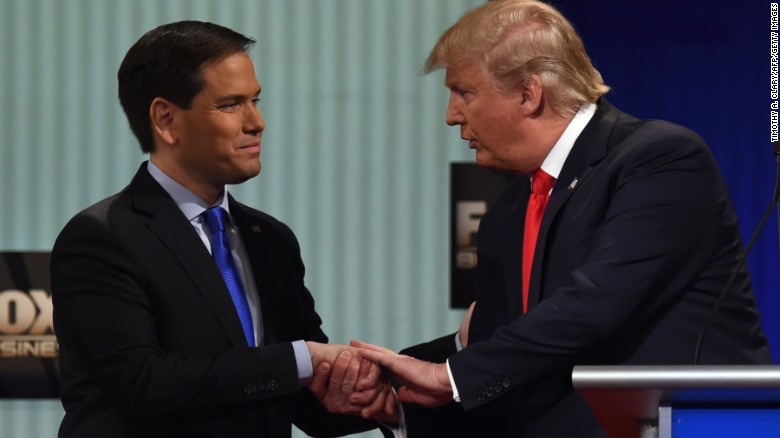 'He doesn't talk like some analyst at a think tank.'

Donald Trump may have called Vladimir Putin “savvy” and a “genius,” but to U.S. Sen. Marco Rubio those controversial comments are just sarcasm.

Rubio, who continues to do multiple interviews a day on the Ukraine crisis, was asked Tuesday about Trump’s comments made last week on a conservative talk radio program, where the former President seemed to extol the Russian leader and possible war criminal for smart moves in invading Ukraine last week.

“I heard that interview, OK? I’m not going off the press reports. I heard the interview. I didn’t hear him say that. I heard what I heard. A guy who was being sarcastic. He was saying, ‘Oh, look at this guy, he’s a genius, this, that and the other,” Rubio said on CNBC’s Squawk Box Tuesday.

“Well, what went wrong was a rigged election, and what went wrong is a candidate that shouldn’t be there and a man that has no concept of what he’s doing. I went in yesterday and there was a television screen, and I said, ‘This is genius.’ Putin declares a big portion of the Ukraine — of Ukraine — Putin declares it as independent. Oh, that’s wonderful,” Trump said on the Clay Travis and Buck Sexton program.

Though the transcript includes the descriptor “(sarcastic)” after Trump’s “Oh, that’s wonderful,” the sarcasm did not apply to the preceding statements.

Trump has been very clear in his position that the 2020 election was not legitimate, and he has routinely bashed Biden’s competency as well.

The former President continued in tones of admiration that didn’t seem especially sarcastic.

“So, Putin is now saying it’s independent, a large section of Ukraine. I said, ‘How smart is that?’ And he’s gonna go in and be a peacekeeper. That’s the strongest peace force, we could use that on our southern border. That’s the strongest peace force I’ve ever seen. There were more army tanks than I’ve ever seen. They’re gonna keep peace all right. No, but think of it. Here’s a guy who’s very savvy. I know him very well. Very, very well,” Trump said.

“You gotta say that’s pretty savvy. And you know what the response was from Biden? There was no response. They didn’t have one for that. No, it’s very sad. Very sad,” Trump added.

Rubio said it was “unfortunate” that Trump used that language, arguing that other Republicans used language praising Putin’s savvy that was “twisted.”

“You gotta be careful with every word that you say, because a media narrative will be created against you,” Rubio said.