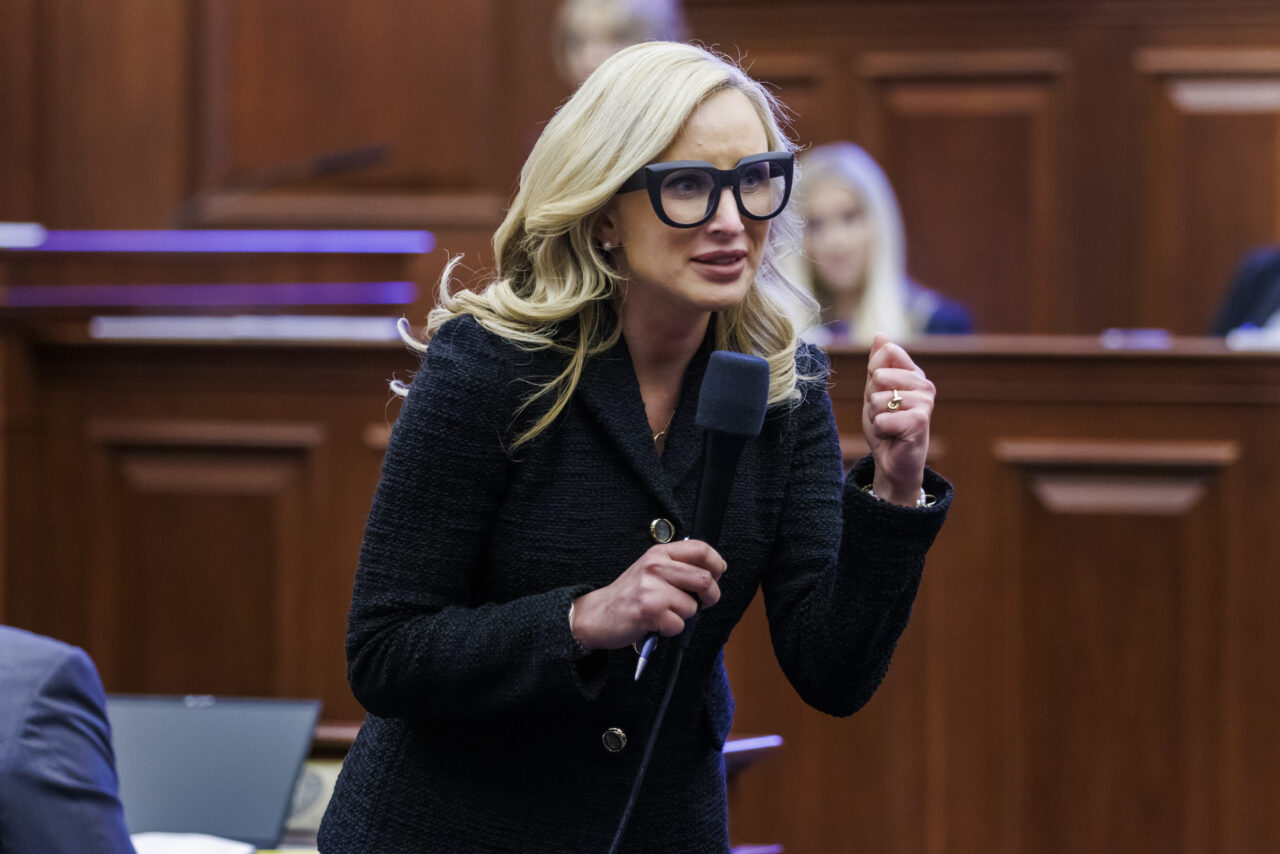 The measure comes as Republicans across the country move to tighten access to the procedure.

Abortions after 15 weeks would be banned in Florida under a bill Republican senators sent to Gov. Ron DeSantis late Thursday, capping a bitter debate in the statehouse as a looming U.S. Supreme Court decision may limit abortion rights in America.

DeSantis, a Republican, has previously signaled his support for the proposal and is expected to sign it into law.

Here is a compilation of reactions to passage of the ban:

Last night, the Republican-controlled Florida legislature passed a dangerous bill that will severely restrict women’s access to reproductive health care. My Administration will not stand for the continued erosion of women’s constitutional rights.

“A vast majority of Floridians support and respect a woman’s right to choose. Yet the Republican controlled Florida Legislature acted into the late hours of the night to attack Roe v. Wade and undermine a woman’s right to choose. Governor DeSantis has made his anti-women stance clear, but he still holds the veto pen and the people of Florida demand he do the right thing and stop this legislation from becoming law.”

“Today is a dark day for women in Florida. This extreme abortion ban is not only cruel, immoral, and inhumane – it violates both the Florida and the U.S. constitutions. It’s an insult to the dignity of women and our ability to make decisions about our own lives. It will punish women and girls who have endured traumas that the privileged white men who pushed this bill could never even imagine, and every single member who voted for it should be ashamed. I want every woman who feels scared or outraged about this bill to know that you are not alone. To every woman who has ever told her story and felt like no one was listening: I promise you that I am. For every survivor of rape, sexual assault, and human trafficking: we will keep fighting for you. I wish that the state that we love was better for all of us. We will stand on the shoulders of our mothers and grandmothers who have been fighting for our rights for generations and use the love we have for our sisters, daughters, and friends to give us the strength to continue this fight for as long as it takes.”

“Every abortion kills a special and unique human being who deserves protection under the laws of this state and the chance to grow up in a loving family. Growing up as an adopted child in a family that took in foster children, it has always been important to me that our state do everything we can to promote adoption as an alternative to abortion. Floridians can be proud that we live in a state that not only protects innocent, unborn life, but also supports children and parents. I commend Senator Stargel for her dedication to strong pro-life, pro-child, and pro-family legislation.”

“Florida Republicans claim to be defenders of ‘freedom’ – except when it comes to a woman’s freedom to choose what is right for herself, her body, and her future. At its core, this ban is nothing more than a control mechanism, and an affront to every woman’s individual freedom and independence – with NO exemption for rape, incest, or human trafficking. This is why we must continue building the bench of pro-choice women leaders who can help defend reproductive rights in Florida government. It’s why the work of Ruth’s List matters now more than ever.”

“Stripping these freedoms will not reduce abortions, but it will make them less safe and result in more women in our state dying as a result. Not only does this bill politicize a woman’s basic right to make her own healthcare choices, it will also have a disproportionate effect on those who are in poverty, have health issues, and who are in domestic violence situations.”

“We have a duty to protect life. This bill safeguards innocent, unborn children with beating hearts, who can move, taste, see, and feel pain. In the half century since the Roe v. Wade decision, science has shown us that an unborn baby rapidly develops the functions and form of a child long before viability. I am grateful to my Senate colleagues for their support and look forward to seeing this pro-life legislation signed into law by Governor DeSantis.”

“It is not the government’s place to interfere with one of the toughest decisions a person will ever make. That private decision is one of faith, healthcare, personal freedom, and is essential to protecting the emotional and physical future of people and their families. It’s why I’m so inspired by the work of Ruth’s List to recruit and support Democratic pro-choice women stepping up to run for all levels of public office. It’s the only way for us to secure a better future for our state.”

“HB5/SB146 is one of the most extreme anti-abortion and anti-freedom bills to ever pass the Florida Legislature. It is a direct assault on the people of Florida and our constitutional rights. Let me be clear: there is no such thing as a reasonable abortion ban. Nothing in this ban is moderate, it is extreme. And despite impassioned pleas by Democrats to pass amendments that would provide exceptions for rape, incest, and human trafficking none were accepted by the Republican majority. The only exceptions that do exist in the bill are very narrow, and needs to be verified by two doctors, creating an unnecessary and undue burden to an already restrictive bill.

“While we continue to look forward to the day when the full protection of unborn life is recognized in law, we are encouraged that HB 5 further limits the grave harm that abortion inflicts upon women and children.”

Stephanie Fraim, president and CEO of Planned Parenthood of Southwest and Central Florida:

“Banning abortion is not what Floridians want. Every poll shows a majority of Floridians are against a 15-week abortion ban. Why do some politicians think they are better equipped to make medical decisions about someone’s pregnancy than the pregnant person, their family, and their doctor? Floridians want the freedom to make their own private medical decisions, not to be told what to do by politicians in Tallahassee. This cruel and careless law strips people of the right to control their own bodies and their futures.”

“The passage of this abortion ban is absolutely disgraceful. With this bill, Floridians are deprived of the right to determine for themselves whether and when to have a child. This cruel bill will amount to forced pregnancy for anyone who cannot obtain the care they need within this arbitrary time limit, and there is no greater governmental intrusion. Forcing someone to continue their pregnancy against their will, and keeping Floridians from accessing critical and essential reproductive healthcare is unconscionable and inhumane. It’s a dangerous violation of a person’s bodily autonomy and privacy. Politicians passing these unpopular and unconstitutional bans on abortion is an irresponsible diversion from the real issues that Floridians need our legislature to address – unemployment, healthcare, affordable housing, and clean air and water. HB 5 rejects what the majority of Floridians’ desire — the freedom to control their lives, their bodies, their healthcare, and their future. Every Floridian should be able to make their own personal, private health care decisions without politicians deciding for them. In a state that prides itself on purportedly being free, this is an unprecedented level of government overreach and intrusion.”

“We’ve entered a dangerous time for Floridians’ reproductive freedom. In just a few months, thousands of pregnant people in Florida will no longer be able to access the care they need without leaving their state. The supporters of this bill have put their own political ambitions and beliefs before the health and futures of their constituents. We know they will not stop here. Their ultimate goal is to ban all abortions in the state of Florida. But Planned Parenthood Action Fund and our state partners will never stop fighting for patients. We will do everything in our power to stop this law from taking effect and depriving Floridians of their rights.”

“It is immoral and unconscionable that Florida Republicans made it their mission this session to insert politics into private medical decisions that should be left to a patient and their health care provider. This law is completely out of line with what the majority of Floridians want, which is the freedom to make their own medical decisions. Here at Ruth’s List it means our mission is more urgent than ever. The only way we’ll stop Florida from sliding further backwards is at the ballot box come November. That’s why we’re recruiting, training, and supporting a record number of pro-choice women this year.”