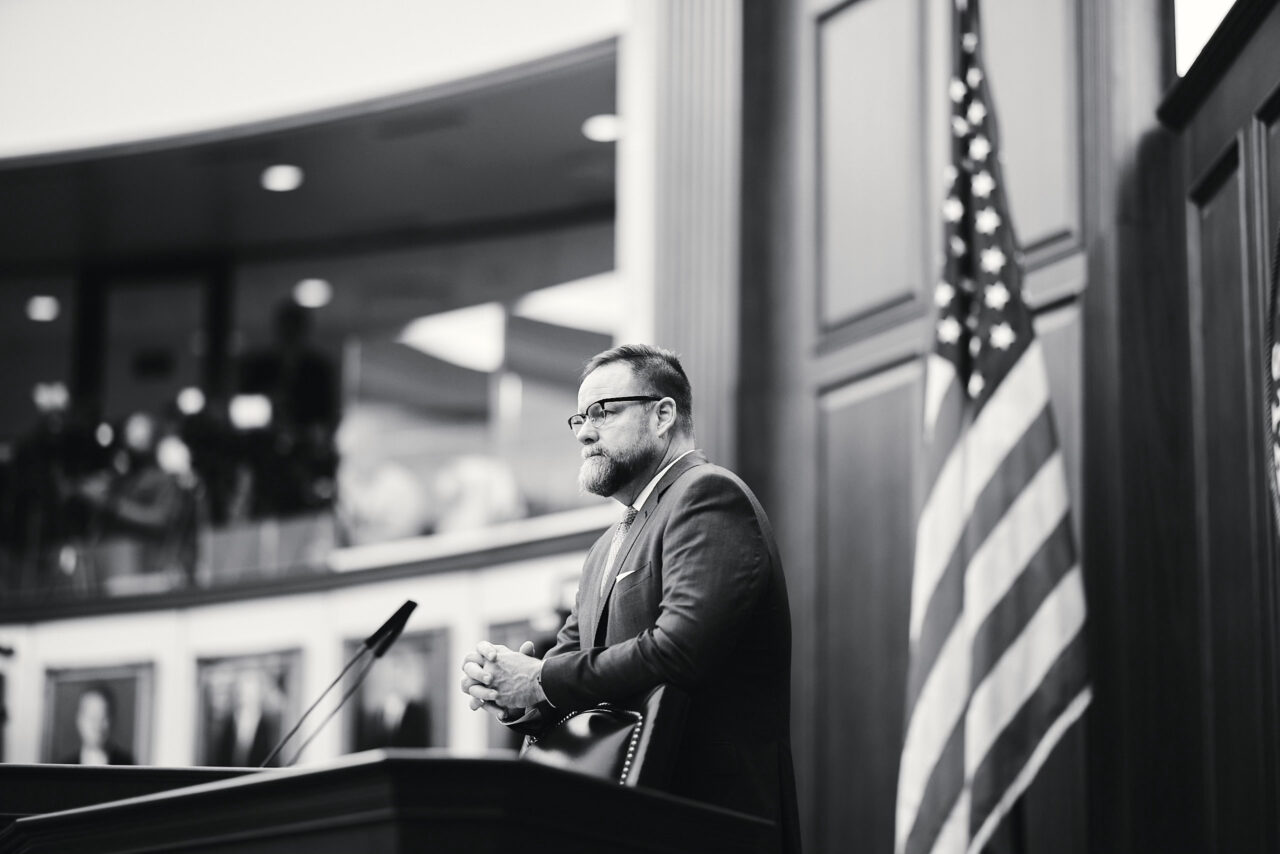 He does have another career brewing.

Florida legislators take pains to disagree agreeably, to preserve a certain decorum in Tallahassee regardless of currents that may roil their counterparts in Washington. Sen. Aaron Bean has developed a singular brand of across-the-aisle workmanship that extends well beyond the Capitol.

The Republican and Senate President Pro Tempore has represented parts of Nassau and Duval counties making up the 4th District since 2012, campaigning on elevating the region’s profile. He has cruised to victory in his Senate races but began his political career as an upstart, a young banker who won a seat on the Fernandina Beach City Commission in 1996. Council members subsequently voted him Mayor-Commissioner. At 29, he was the youngest to hold that office in the city’s history.

He ran for the state House of Representatives in 2000, a decided underdog in a five-county area that had not elected a Republican since the Civil War.

Bean and volunteers campaigned directly to residents, knocking on 40,000 doors. Many doubted he could defeat Democrat Bobby Hart, who was ahead in the polls.

His response: “Check back with me.”

Privately he held his breath until election night. Bean won with 58% of the vote.

“I had no business winning that House seat,” he said.

He has run a combined 16 years in both houses on that same spirit of unstinting optimism and elbow grease. He helped create an alternative health care marketplace in 2008, Health Choices, then proposed it as an alternative to Medicaid expansion under Obamacare. Bean was a Senator by then. He has lobbied prominently for fiscal conservatism, most recently by sponsoring an immigration enforcement bill that critics argued would threaten thousands of migrants, including some who have overstayed visas or might have asylum applications pending.

Bean countered that the bill passed in March relied on federal definitions of legal or illegal migrant status.

“I don’t know if it can be more simple,” he told the Tallahassee Democrat.

Other legislative interests range from school choice to legalizing medicinal marijuana to helping foster parents teach teenagers to drive without facing crippling insurance rate hikes. He has served on several committees and chaired the Senate Appropriations Committee. He is used to dueling with colleagues over ideas; harsh rhetoric from citizens in recent years is another matter.

“We are more polarized than ever,” Bean said, a development he attributes, in large measure, to social media. “I have an ‘Oh, wow’ folder (of comments) from the meanest people, the vast majority of whom don’t know me.”

A tweet, for example, one of several in which he boasted of his son Walker’s achievements on the Fernandina Beach High track and field team, prompted this reply: “If you die, it will teach him a lesson. I hope you die.”

Sen. Bean continues a hospital development position in private life, as well as what he calls his “side hustle,” auctioneering. A member of the National Auctioneers Association, he has called numerous auctions at benefits since 2010 to supplement his Senate salary of just under $30,000.

He donated his talents for a Jan. 25 “Red Dog, Blue Dog” fundraiser benefiting the Nassau Humane Society and other animal services organizations. Bidding pits a half-dozen Republican legislators against an equal number of Democrats. Organizers hoped to top the $9,600 raised in 2020. But this time, it was Bean standing on top of the bar, working a full-throated crowd from the left side of the room and back again.

Now that term limits have ended his Senate service, Bean will have more time for the golf course. He does have another career brewing, however.

“I want to be a motivational speaker,” he said.