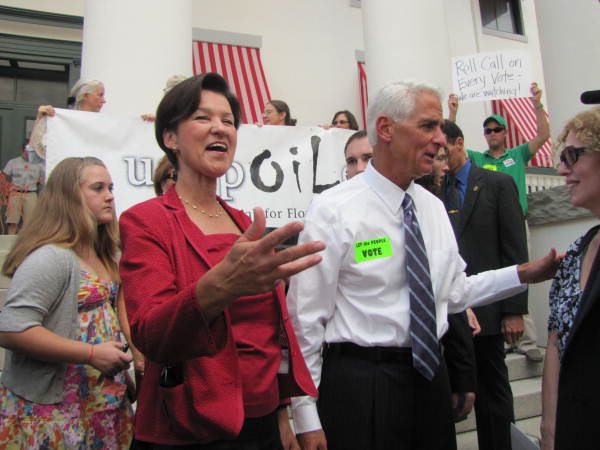 She served as CFO the last time Crist was Governor.

“From his time serving the people of Florida as Governor to his tireless service for Pinellas County in Congress, Charlie Crist has spent his career fighting for all Floridians. There is no doubt that he is exactly the leader we need back in Tallahassee,” Sink said.

“I know firsthand from my experience serving as CFO when Charlie was Governor, that he is the tested leader we need in this moment to unite our state and bring common sense and decency back to Tallahassee. As partners in government, we worked side by side to restore the voting rights of former felons, address the Deepwater Horizon disaster and Great Recession, protect the state’s pension plan, and preserve Florida’s environment. I am proud to endorse Charlie Crist to be our next Governor of Florida.”

Sink won election as CFO in 2006, the same year Crist was elected Governor as a Republican. She remains one of the most prominent Democrats in the state, and in 2010 was the Democratic nominee for Governor herself.

She quickly said after her election she would not challenge Crist even when the two were in different parties. She declined in 2010 to get into the Governor’s race until Crist chose to run for Senate instead.

While she lost the Governor’s race to Republican Rick Scott, she has remained a powerful force in Florida Democratic circles. She founded Ruth’s List in 2008, naming it for Ruth Bryan Owen, the first woman elected to Congress from the South. The organization has been a training ground for female Democratic candidates for public office for more than a decade.

Notably, Sink has now backed Crist over two Primary opponents who rose up in politics with the support of Ruth’s List: Agriculture Commissioner Nikki Fried and state Sen. Annette Taddeo. The winner of the Democratic Primary aims to upset Republican Gov. Ron DeSantis as he seeks re-election.

Crist, who was elected as a Democrat to Congress in 2016 in a seat where Sink once ran, embraced her support.

“I am honored that our grassroots campaign has earned the support and endorsement of a true fighter for Floridians, former CFO Alex Sink,” Crist said.

“From Pensacola to Key West and everywhere in between, our vision of a Florida for all Floridians continues to resonate with folks tired of the divisiveness and destructive culture wars coming out of Tallahassee. The Sunshine State deserves leadership that will make our state more affordable, healthier, and safer. Together, we’re ready to roll up our sleeves and turn the tide this November.”

previous‘Nothing matters to these Republicans but power — power and malice’