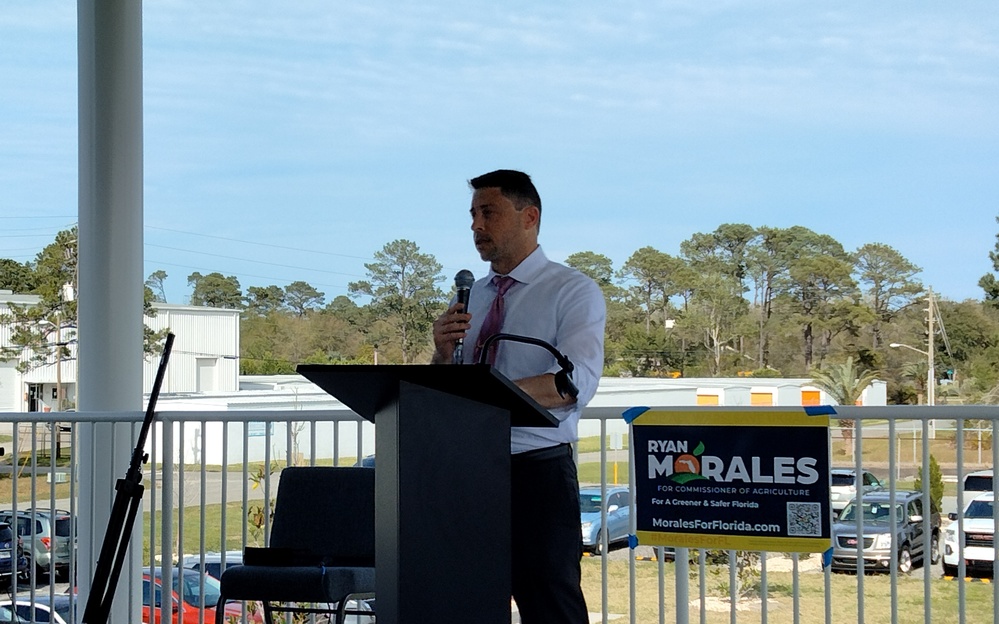 An expected visit by the Florida Democratic Party chairman to Nassau County’s small but hopeful Democratic contingent didn’t happen as planned, thanks to a surprise trip to South Florida by Speaker of the House Nancy Pelosi. But the show must go on, so with Manny Diaz out, Chief Financial Officer candidate Adam Hattersley and Agriculture Commissioner candidate Ryan Morales were in.

“Especially for these statewide races, it doesn’t matter if they’re not used to local candidates winning,” Hattersley said before he spoke to the crowd over the weekend at the Fernandina Beach airport. “They can be a part of and have to be a part of the statewide elections.”

He pointed to the races for U.S. Senate, Governor and the Cabinet positions in which Democrats need to draw voters from wherever those voters can be found.

“Nassau County, actually, was one of the few counties that performed more Democratic from 2018 to 2020 — there are only five or six in the whole state that did that, and Nassau County was one of those,” Hattersley said.

Regardless, the county’s Democratic performance of late tops out around 27% of the vote.

“Even though they’re not used to winning yet, they do know how to work,” Hattersley said.

The Riverview resident — an Iraq veteran, Bronze Star recipient, former Navy submariner and champion gymnast — flipped House District 59 in 2018. He lost a Democratic Primary campaign for Congress two years later. He said the reason he wants to unseat Jimmy Patronis is that the current CFO isn’t doing his job, and the atmosphere in Tallahassee isn’t helping.

“I saw a system that after 25 years of being mired in a swamp of one-party rule, it needs to be put on its head,” Hattersley said. “A system that’s made Florida near the bottom in housing affordability and getting worse. We’re at the bottom of the country in teacher pay. We’re lower than Alabama — I know how you feel about that.”

Morales, a cannabis activist from Clermont, is the only Democrat in the Agriculture Commissioner race. If the Republican Primary concludes as expected, he would be in the unenviable position of trying to hold onto a statewide Democratic seat against the collective might of Senate President Wilton Simpson’s well-funded effort.

Morales laid a lot of the responsibility for the last Legislative Session’s culture war legislation at the feet of Simpson.

He touched on priorities like environmental preservation — especially regarding the Everglades — along with working to eliminate food deserts and to increase the use of biofuels. The crowd reacted most to his mushroom ideas, though.

“On top of (further cannabis legalization), we need to talk about psychedelic mushrooms, which are actually helping veterans, police officers, (firefighters) and families,” Morales said. “Why? Because it works. It’s natural, it’s never going to kill anybody and guess what? It does other things.