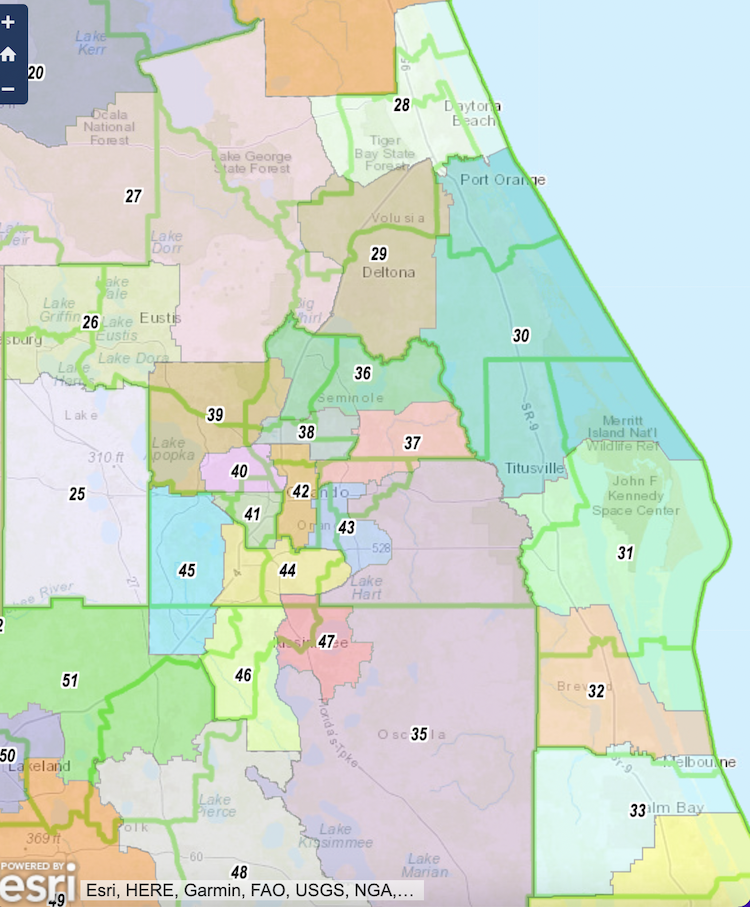 Here's the scorecard for House contests in Central Florida with the new map.

The game of musical chairs has accelerated across Central Florida to match candidates’ ambitions with new districts on the Florida House map.

Incumbent Republican Reps. Webster Barnaby, Fred Hawkins, Tyler Sirois and David Smith have found their new homes and made it official by refiling their candidacies for the appropriate districts in the new House map.

Quite a few other candidates, including a few House members, still are running in the wrong districts. That includes Republican Reps. Thad Altman, Randy Fine and Keith Truenow and Democratic Reps. Kristen Arrington, Travaris McCurdy and Daisy Morales.

Here’s how the 2022 House elections appear across the greater Orlando region, including the Space Coast:

— Western Volusia County, minus Orange City and DeBary, now will be represented mostly through House District 29, which has a moderate Republican lean to its electorate, based on the voting outcomes from the past two General Elections.

Republican Rep. Barnaby, of Deltona, has migrated his candidacy there from his old House District 27.

No one else is properly filed yet for the new HD 29, and no one had challenged Barnaby in his old HD 27.

— Northern Brevard County and a corner of southeastern Volusia now are represented by House District 30, which has a very strong Republican voter base, as indicated by the past couple of General Elections. There is no incumbent. Barnaby and Republican Rep. Rene Plasencia now represent much of that area. Plasencia is not seeking re-election, and he doesn’t live there anyway.

Hattaway of Titusville and Chase Tramont of Port Orange, both Republicans, appear to be properly filed to contest HD 30.

No one else is properly filed there.

— Central Brevard now is under House District 32, with a solid Republican voter base.

No one currently filed to run there actually lives there.

Republican Rep. Altman lives there and will have to transfer his candidacy from his old House District 52.

Republican challenger Chandler Austin Langevin also would have to move his candidacy to challenge Altman.

— Most of southern Brevard now is represented through House District 33, which has a Republican lean in voter registration.

No one is properly filed there.

Republican Rep. Fine may move his candidacy there from the old House District 53, though he might also wind up in House District 34, farther to the south.

— HD 34 covers part of south Brevard and Indian River County, with a strong Republican base.

There are no candidates properly filed to run there yet.

— A big new district, House District 35, has been created to represent huge swaths of mostly rural Osceola County and most of far-eastern Orange County, including Lake Nona, Lake Mary Jane, Waterford Lakes, Bithlo, and Christmas. The district has a Democratic lean.

Also running in HD 35 now are Democratic challengers Keen and Rishi Singh Bagga, both of Orlando.

— Northern Seminole County now is represented through House District 36, and as drawn it appears to have a slight Democratic lean. Republican Rep. Scott Plakon of Lake Mary would be the incumbent, but he’s term-limited out. His wife, Rachel Plakon, has moved her candidacy there from the old HD 29.

There are no other candidates properly filed yet in HD 36, though a couple of other candidates filed from the region under the old map. Democrat Luke Dowe and Republican Richard Santos likely will refile to oppose Plakon.

— Northeastern Orange, including the University of Central Florida, has been combined with southeastern Seminole, including Oviedo. Those areas will sit in a new House District 37, with a Democratic lean. Democratic Rep. Carlos Guillermo Smith of Orlando has moved his candidacy there from his old House District 49. Republican Susan Plasencia of Orlando also has filed there.

— Central Seminole will be covered by House District 38, which now appears to have a slight Democratic lean. Republican Rep. David Smith of Winter Springs has moved his candidacy there from his old HD 28.

Challenging him are Republican Drake Wuertz of Altamonte Springs, who moved his candidacy from the old HD 30, and Democrat Edmund Measom of Casselberry.

— Northwestern Orange and a sliver of western Seminole, an area without an incumbent, is now represented by House District 39, with just about an even partisan split of voters.

Three candidates have properly filed there: Tiffany Hughes of Longwood, a Democrat is in. So too are Apopka Commissioner Doug Bankson and Chuck Burt of Apopka, both Republicans.

— A swath of western Orange including Ocoee, Pine Hills and College Park now is in House District 40, with an overwhelming Democratic base. That area is mostly represented now by Democratic Rep. Kamia Brown, who is running for the Senate.

Democrat Bracy Davis has filed there. Republican Nate Robertson said he will be moving his paperwork from House District 45 shortly, and Democrat Melissa S. Myers of Clarcona may follow from HD 45.

— West-central Orange including Parramore, Orlo Vista and Oak Ridge, now falls into House District 41, with an overwhelming Democratic base. Democratic Rep. Travaris McCurdy is the incumbent for most of it, but he has not yet migrated his candidacy from his old House District 46.

There are no properly-filed candidates yet in HD 41.

— North-central Orange, including Maitland, Winter Park, downtown Orlando, Edgewood, Belle Isle and Orlando’s near-east side, now are in House District 42, with a solid Democratic base. Democratic Rep. Eskamani has moved her candidacy there from her old House District 47.

— East-central Orange, including Azalea Park, Union Park and Rio Pinar, now are in House District 43, with a solid Democratic base. That area is mostly represented by Democratic Rep. Daisy Morales, who has not yet moved her candidacy from the old House District 48.

— House District 44 has been reconfigured, but still holds part of southwestern Orange, including Doctor Phillips, Hunter Creek and the tourist areas around Universal Orlando and SeaWorld, then stretches eastward to Meadow Woods and the northern portion of Lake Nona. It has a solid Democratic voter base.

Republican Janet Frevola has kept her candidacy active there.

— Another part of southwestern Orange including Disney, Windermere, Winter Garden and reaching to Four Corners has been sliced off for House District 45, with a Democratic lean. Thompson represented most of that area, so it has no incumbent running.

Republican Carolina Amesty of Windermere and Democrat Allie Lee Braswell Jr. of Winter Garden have filed there, while Republicans Francois and Zhao of Windermere moved their candidacies there from elsewhere.

— Northwestern Osceola, including western Kissimmee, Celebration, and Poinciana, is now in House District 46, with a strong Democratic base.

It awaits the transfer of Democratic Rep. Arrington, and perhaps others who previously filed in the old HD 43: Republican Jeffrey Hawk, Democrat Anthony Nieves, and independent candidate Ivan Rivera.

No one has properly filed there yet.

— South-central Orange and north-central Osceola, including parts of Kissimmee, Meadow Woods and St. Cloud, now are in House District 47 with a Democratic lean.

With Hawkins running in the HD 35 part of his old district, the new HD 47 has no incumbent.

Democrat Daniel Paul Marquith of St. Cloud is the only candidate properly filed there.