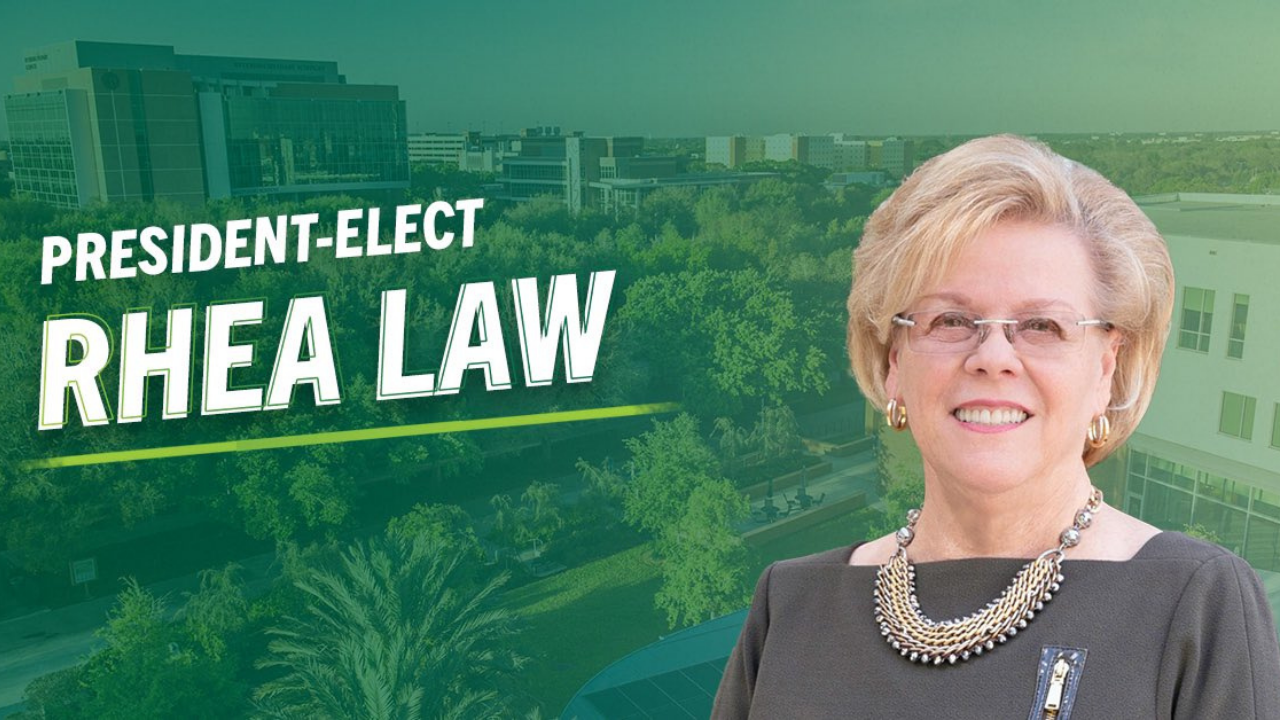 Law has served as USF’s interim president since August.

The University of South Florida board of trustees unanimously voted Tuesday to name Rhea Law as the university’s president-elect.

Law’s appointment is pending confirmation by the Florida board of governors, who will likely approve the selection next Wednesday in Jacksonville. Law will become the university’s eighth president and the first USF alum to lead the institution.

“Over the last seven months serving as interim president, I have been inspired and energized by the unwavering commitment of our University of South Florida community. Our faculty, staff, students and supporters have a passion for making a difference and changing the world, and it is this passion that will take USF to its greatest chapter yet,” Law said in a statement.

“This is more than a job for me. It is a calling to give back to this community that has given so much to me. When we link arms and work together, anything is possible.”

Under Law’s leadership, USF experienced the “most transformational” Legislative Session in the university’s history, with record-setting investments in operations on all three campuses. That includes $75 million alone from the state for the university’s proposed Environmental & Oceanographic Sciences Research & Teaching Facility.

Will Weatherford, who chairs USF’s board of trustees, lauded Law’s performance as interim president.

“Rhea Law is the right leader at the right time for the University of South Florida. From her time as a student, to becoming a staff member, to later serving as chair of the board of trustees, she has contributed to the university’s success from nearly every vantage point, and brings an unrivaled, comprehensive perspective on USF’s trajectory. It would be hard to find anyone with a deeper passion and love for USF than Rhea Law,” Weatherford said in a statement.

“We have the utmost confidence in Rhea, and I can’t wait to see how far we can take USF under her leadership. Our best days are ahead of us.”

The board’s selection of Law comes after a seven-month national search process. Approximately 2,000 respondents participated in an online survey to gather feedback on specific qualities they’d like to see in a new president, according to the university. Hundreds of students, faculty and staff also participated in town hall meetings, followed by candidate interviews and visits on all three campuses.

“From the beginning of our search, we pledged to prioritize community input and engagement. As the process progressed, we continued to listen to feedback and it consistently led us to Rhea Law,” said Mike Griffin, who served as chair of the USF Presidential Search Committee.

“In addition to her decades of experience dedicated to elevating the University of South Florida and the Tampa Bay region, over the past seven months serving as interim president, Rhea has shown the leadership qualities to bring our community together, build on our history and carry out a vision for even greater success in the future. Rhea Law has earned the opportunity to be our next president and I can’t think of a better leader to take us forward.”

Law previously served as chair of the university’s board of trustees, becoming the first and only woman to date to lead the board. She’s also an alumna of the university, earning a degree in management before going to Stetson University College of Law for her law degree.

Law is the former chief executive officer and chair of the board of Fowler White Boggs, a Florida law firm. She led the merger of Fowler with a national firm, Buchanan Ingersoll & Rooney, in 2014.

She is also a founding member of the board of directors of the USF Law Alumni Society. In addition, Law served as a member of the USF Research Foundation Board and was named a 2018 Distinguished Alumna by the USF Alumni Association. She previously served on the board of directors for the Tampa Bay Technology Forum and the H. Lee Moffitt Cancer Center and Research Institute, and currently serves on Moffitt’s National Advisory Board.