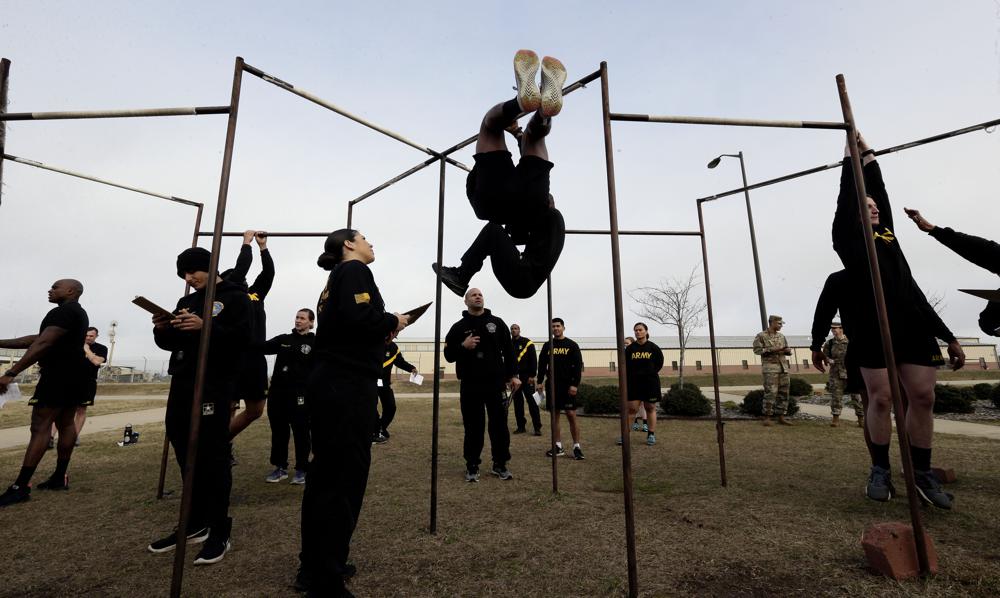 "The latest revision will help maintain the Army’s strong commitment to a positive culture of physical fitness while ensuring fairness.”

After three years of complaints and debate, the Army has scrapped its move to have a physical fitness test that is gender- and age-neutral, and will now allow women and older soldiers to pass while meeting some reduced standards.

The decision comes after a study by the RAND research organization confirmed that men were passing the new six-event fitness test at a much higher rate than women and that older soldiers were also struggling with their scores in the expanded, more difficult test developed in 2019.

The change, however, will affect only the regular fitness test that soldiers take annually. Qualifying for certain Army jobs, particularly more demanding combat positions or specialties such as Ranger school, will continue to require that everyone — regardless of age or gender — must pass the same fitness tests and standards.

The Army revamped the fitness test three years ago, going from three events — pushups, situps and a run — to a more difficult and complicated combination of six events. Those six are a dead lift, power throw, pushups, plank, run and a combination sprint/drag/carry. A leg tuck was included early on but has been eliminated.

The new test, however, has been met with widespread criticism as women and older soldiers, including some in senior positions, had difficulty passing it. Troops in the National Guard and Reserve were also struggling and were having a hard time finding and getting equipment needed to train on and practice for the test.

Chaitra Hardison, a behavioral scientist who wrote the RAND study, said the data showed “some groups failing at noticeably higher rates — women, older soldiers, Guard and Reserve personnel and soldiers in some occupational specialties.” She said the difference in passing rates was the largest between the genders.

The latest change will allow women and soldiers to do a bit less in some of the events and still pass. For example, women would have to pick up 20 pounds less weight in the dead lift than men to pass, and men older than age 46 would also have a lower weight bar. Women and older men would get a minute or two longer to complete the run.

The new program also brings the Army back in line with the other military services, which have varying fitness tests, but all use tiered event requirements based on age and gender.

Hardison said the RAND study, which included analysis of about 460,000 soldiers’ tests, concluded there was limited evidence showing that the resulting scores accurately predicted combat job performance or that doing well led to reduced injuries —- two reasons the changes were made in the first place.

Overall, RAND said the test was better used to assess a soldier’s general physical fitness, and not to predict job performance, and that using a tiered scale for passing scores made the test less punitive. For example, a low fitness score can affect a soldier’s ability to be promoted.

“The latest revision,” said Sgt. Maj. of the Army Michael Grinston, will help “maintain the Army’s strong commitment to a positive culture of physical fitness while ensuring fairness.”

The overhaul of the Army’s fitness test in 2019 was triggered by complaints that soldiers were not fit enough. Nearly half of the commanders surveyed a year earlier said new recruits coming in could not meet the physical demands of combat. Officials also said that about 12% of soldiers at any one time were unable to deploy because of injuries.

After months of study, the Army shelved its long-standing test — two minutes of situps, two minutes of pushups, a 2-mile run — that scored soldiers differently based on their age and gender. Officials rolled out the new, harder version that graded everyone equally, but allow some flexibility in scores for those with less rigorous jobs. That program has been done on largely trial basis as they worked to finalize it.

The new test included a dead lift, with weights between 140 pounds and 340 pounds; a standing power throw that requires soldiers to toss a 10-pound medicine ball backward and overhead; two minutes of hand-release pushups; a “sprint-drag-carry” that involves 50-yard sprints, a sled drag, and a sideways shuttle carrying kettle bells; the leg tuck or plank, and a 2-mile run. Soldiers with a doctor’s note can swim, bike or row instead of the run, or they can now do a 2.5 mile walk.

Women particularly struggled with the leg tuck — where they hang from a bar and pull their knees up. The plank was soon added as an alternative test of core strength; now the tuck is gone.

Congress ordered the Army to get an independent assessment of the test, and Army leaders turned to RAND.

In its study, RAND said that because the test is used for promotions and can affect a soldier’s career, the Army needs to make sure the minimum standards are valid and necessary for everyone.

“With the pass rates we observed, many soldiers would be failing if the test were instituted today, including soldiers who were viewed as being in otherwise good standing in the Army,” the study said. It said the Army should consider that a number of those are women and soldiers older than 45 who are in leadership roles.

Not surprisingly, special forces soldiers — whose lives can depend on their physical abilities — had the highest passing rate at 98% to 100%. But at the lower end of the scale were women — and men — in far less physical jobs such as food and laundry specialists, various nutrition, health care and human resources personnel, and chaplains.

The study concluded that the fitness test could drive soldiers out of the Army, both because they failed and were discharged or they voluntarily left because low scores led to fewer job opportunities.

Under the new plan, there will be a trial preparation period. Active-duty soldiers will begin taking the test in April, but will not be penalized if they fail. The test will officially take effect in October, when the results will begin to count. Soldiers will take the test twice a year.

Guard and Reserve soldiers will have until next April to take the test without consequences, and then the results will start to count. They take the test once a year.

Soldiers must get at least 60 points on each test event to pass. The maximum is 100 points. Once the scoring begins taking effect, those who fail will be able to retake the test after several months. If they fail twice, they will be discharged from the Army.

___Republished with permission of The Associated Press.