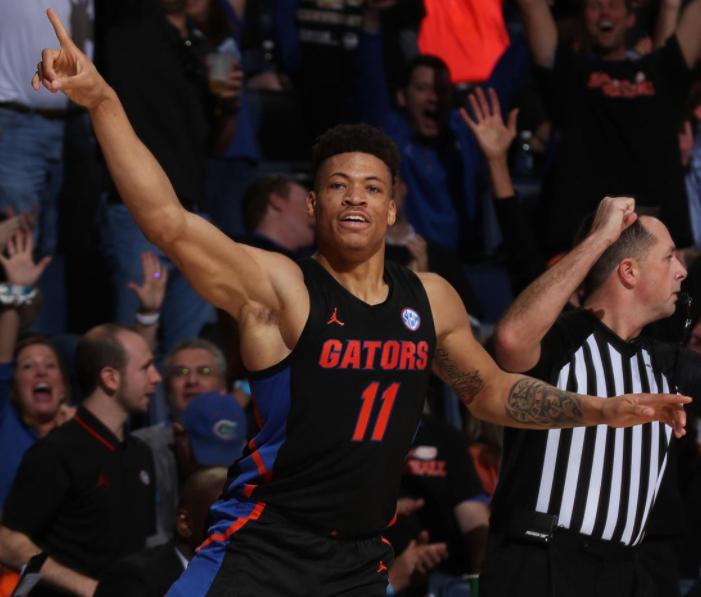 Johnson acknowledged that she was “drunk” and “wildin’.

Keyontae Johnson, the University of Florida basketball star forward praised for his resilience after he collapsed during a game in December 2020, is being formally accused by police of sexual assault of a drunken young woman at a pool party in an incident last month, according to interviews and court records.

Police, who have been investigating the case for four weeks, listened earlier this month on a phone call between Johnson and his accuser in which the player acknowledged having unprotected sex with her after she was intoxicated. He also said he had asked for her consent during the encounter, according to the police sworn complaint. Her response to that on the call was not recorded in the court document.

Details from the police investigation made clear some of the legal challenges facing prosecutors if they were to decide to go forward with the highly sensitive case.

Citing two witnesses, police described Johnson’s accuser as “heavily intoxicated” around the time of the incident and “not making any sense.” Despite those descriptions, she had apparently sharp recollections of the events of that night, which were corroborated by Johnson on the call secretly arranged by police the following week.

Police filed a sworn complaint, dated March 16, in Alachua County Circuit Court that was made first available late Friday. The preliminary charge cited in court records was sexual battery, a first-degree felony punishable by up to 30 years in prison upon conviction.

Johnson, a college senior expected to graduate next month, sounded astonished when a reporter contacted him Friday afternoon by phone to ask about the sworn complaint filed in court. He responded, “What?” He said he needed urgently to contact others he did not identify and hung up immediately.

The university’s athletics department made no immediate announcement about Friday’s disclosure of the police investigation into one of its star athletes.

The incident occurred at an off-campus apartment on Feb. 26, Johnson’s accuser said in an interview in her home, and she contacted Gainesville police the following day. She described Johnson as a previous friend. She did not expressly agree during the interview to be identified publicly, so — consistent with traditional media practices — her name is not being disclosed.

Johnson, who did not play because of his previous health issues, was seen in a video on the sidelines during that game. It was not immediately clear when the team flew back to Gainesville. On his social media account, Johnson retweeted a short video of the team interacting with fans at 2:53 p.m. after their win. The party back in Gainesville was about 6 p.m., police said.

Johnson’s accuser is 19 years old and not a student at the University of Florida. The accuser’s name and identifying details about her also were censored in the sworn police complaint, standard policy in Florida in sexual assault investigations.

In the court records, police said Johnson’s accuser and at least two witnesses attended the party at the Canopy, Johnson’s student apartment complex in Gainesville, in the evening after the pool area was already closed. She had been drinking hours before the party and during the party, and she asked to use the restroom in Johnson’s apartment but does not remember walking to his home, police said.

Johnson’s accuser remembered lying down in Johnson’s apartment with him on top of her, as he asked when she was most recently tested for any sexually transmitted diseases, police said.

Roughly 30 minutes after Johnson and his accuser went to his apartment, two friends at the party texted her worried about her whereabouts. She called one 35 minutes after she left to use Johnson’s bathroom and said she was walking back to the party, police said.

Moments later, she walked past the party and toward the parking lot, where her friends said she was unable to stand on her own, vomiting in the bushes and not making sense. At one point, Johnson’s accuser called one of her friends to look for her, even though she was standing nearby.

Johnson’s accuser told police she woke at 4 a.m. the next day and felt like she had intercourse. She underwent a sexual assault exam and contacted police on Feb. 28.

Police said that in the call with his accuser that police overheard on March 4, Johnson acknowledged that she was “drunk” and “wildin’,” a slang term for acting unconstrained.

Police described Johnson and his accuser in the court records as friends and said they previously had consensual intercourse as recently as August. Since then, police said, Johnson had asked “multiple times” to have sex again, but his accuser declined and “made it clear to the DEF that she did not want to have sexual intercourse anymore,” the report said.

Two people familiar with details of the allegations against Johnson confirmed the incident happened Feb. 26 and said they were aware of the police investigation and cooperating with police. They spoke on condition of anonymity because of the sensitivity of the matter and because one of them is currently romantically involved with Johnson’s accuser.

The court docket indicated that police were accusing Johnson in the sworn complaint of sexual assault, a felony, and that the case against the star player was in its initial stages. A decision by the State Attorney’s Office whether to formally charge or indict Johnson could take six months or more.

Johnson’s basketball career effectively ended 15 months ago when he collapsed – for reasons never made clear – during a timeout in a Dec. 12, 2020, game against rival Florida State. He was carried off the floor on a stretcher and released from a hospital 10 days later and was named a player-coach for the team.

Johnson did not practice or play again with his team but was honored earlier this month with a ceremonial start on senior day against No. 7 Kentucky. Johnson dribbled briefly near midcourt before hugging his teammates. He dropped to the floor and kissed the giant Gators logo as the crowd gave him a standing ovation.

That happened one day after police secretly arranged the phone call with Johnson’s accuser.

T.J. Legacy-Cole reporting; produced by Fresh Take Florida, a news service of the University of Florida College of Journalism and Communications. The reporter can be reached at [email protected] or on Twitter at @legacycoleworld.

previousTakeaways from Tallahassee — The rent is too darn high