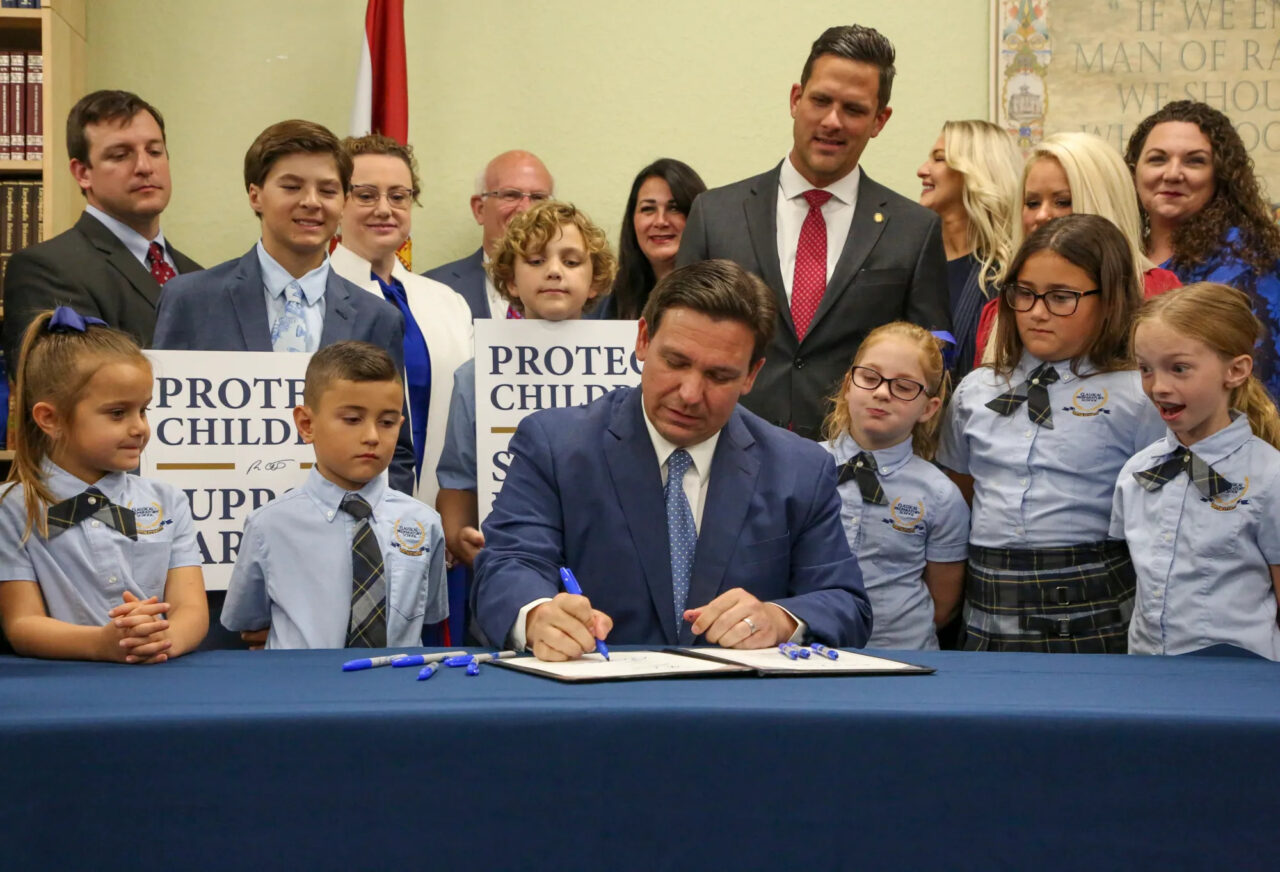 'I may not be correct. We may have a lot of legal opinions.'

But the bill-signing at a nontraditional charter school in Pasco County sparked questions about whether charters, which are public schools, have to follow the new law when it takes effect July 1.

The governor’s press secretary, Christina Pushaw, told the Phoenix in an email Tuesday that the new law “would apply to all public schools including public charters.”

But bill sponsor Sen. Dennis Baxley told the Phoenix that, “I don’t believe they (charter schools) would be” included in the law.

The charter schools sprinkling across Florida — and other states — have been around for more than 25 years, spawning debate, criticism and opposition as well as creating a movement and providing choices for families who may want something other than their neighborhood schools.

Charter schools get public funds and administer state exams in Florida, among other requirements. But generally, they are privately operated and have more freedom and flexibility in certain areas of academics and school operations.

HB 1557, officially titled “Parental Rights in Education” but also known as the “Don’t Say Gay” bill, is now a law. But the words “charter school” do not appear in the legislation. And it’s still not clear if Florida’s charter schools will have to comply with the law in classrooms.

The Phoenix reached out to the Florida Department of Education for clarity on whether charter schools are included under the new law, but did not receive a response.

Jon Harris Maurer is the public policy director for Equality Florida, a statewide LGBTQ advocacy group which strongly opposes the new law. He told the Phoenix in a text that:

“Florida law on charter schools broadly exempts them from complying with the Florida Education Code. While some bills specify that they regulate charter schools in addition to other public schools, this legislation does not make that clear.”

“The lack of clarity on this is representative of the bill’s overall vagueness and ambiguity,” Maurer said.

Baxley, the Senate bill sponsor, told the Phoenix that the law would be applied to traditional public schools — not the nontraditional charters.

“It was certainly my intent to address specifically the schools that we operate in a more direct manner. I see that the charter schools as under oversight — that they are not schools we operate,” Baxley told the Phoenix.

But he noted that he’s not an attorney, and that other interpretations may mean that charter schools are actually included — like Pushaw said.

“I may not be correct. We may have a lot of legal opinions,” he said.

“This is new legislation. So, where it starts, how it progresses through that process, what it looks like at the end, what different people’s understanding of its application is — that really works out over a period of time, and will be reflected, I’m sure, in input from court cases if they get filed,” Baxley said.

Baxley indicated that some of the direct meaning of the legislation, which is now law, would be ironed out through expected court challenges.

“I think since this legislation is passed there will be a period of working out how this will be applied. So you may get some different legal interpretations on the way there. And that’s not unusual. That happens a lot with pieces of legislation,” Baxley said.

He added: “A lot of these things will filter out as they work down through the professional educators and with the attorneys who are challenging the wording of this statute.”

Equality Florida previously stated plans to sue should the effects of the legislation harm any student.

That law allows parents to sue if a school district withholds information about their child’s well-being or if their child is exposed to classroom instruction on sexual orientation or gender identity deemed not “age-appropriate.” The bill singles out kids in kindergarten through third grade but could capture instruction and counseling through high school.

Opponents refer to it as “Don’t Say Gay” because of fear of a chilling effect in public school classrooms regarding LGBTQ students, teachers, or topics.

As to charter schools, some 341,926 students were enrolled in one of Florida’s 687 charter schools in the 2020-21 school year. That’s out of some 2.8 million public school students in all, according to September 2021 data from the Florida Department of Education.

The schools are created through an agreement or ‘charter’ typically between the school and the local district school board.

previousNo. 14 on the list of Tampa Bay's Most Powerful Politicians: Lawrence McClure