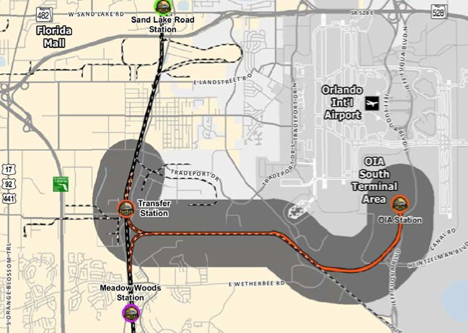 Months of meetings between various transportation interests, including rivals, may be bearing a new railroad plan through the Orlando area that could clear tracks for long-sought expansions of both commuter rail locally and intercity high-speed rail.

The emerging plan, called the “Sunshine Corridor Program,” would extend SunRail commuter train service to Orlando International Airport and the Orange County Convention Center, and extend Brightline higher-speed intercity passenger rail service from the airport to Walt Disney World and then on to Tampa from there.

If a coalition of rivals solidifies, the plan could resolve sometimes bitter disputes over how Orlando could extend local rail service and become a pivot hub for high-speed intercity service connecting Miami, Orlando and Tampa. The end result could be a united push of state, local and major business interests all on the same team, for once.

The plan also could conceivably tap into billions of dollars of new federal infrastructure money soon to become available through the $1.2 trillion Infrastructure and Jobs Act approved by Congress last fall.

“There was a lot of: people taking positions and not talking to each other, but talking and yelling at each other. So I convened some meetings between the two parties and discussion about how we could resolve this,” said Orlando Mayor Buddy Dyer. “At the same time, the Congress passed the bipartisan infrastructure act. And as were having these discussions in November and December, it morphed a little bit, into, ‘With this money available from the federal government, now the time is right to think about taking SunRail both to the airport and on a west corridor to International Drive.

“Eventually Brightline decided that was a better route than what they had proposed,” Dyer said.

“This is the type of big vision project that Central Florida needs and one that will improve the quality of life for Central Floridians while ensuring an economic advantage for decades. Building momentum for a project of regional significance requires strong leadership and the backing of the entire community and we’re seeing that coming together in Central Florida,” said Christine Kefauver, senior vice president of corporate affairs for Brightline Trains

But the prospect of federal money could require urgent and perhaps even expedited planning and approvals to meet federal deadlines for that money.

On Monday, Orange County Mayor Jerry Demings wrote to a long list of community leaders spelling out some of the details and upcoming steps, and declaring “time is of the essence.”

Demings’ letter was a follow-up to the most recent meeting, which took place at the American Public Transportation Association office in Washington last week, and involved state and local transportation officials, and representatives of the private Brightline train service and major Orlando business interests.

“During the meeting, the group discussed various issues, such as routes, stops ridership, federal grant requirements, private funding, timeframe, costs, grant sponsorship and local community support,” Demings wrote. “The project has the potential to provide an east-west connection for SunRail desired by our residents, and solve a route issue for Brightline that has divided our community.”

Discussions are continuing with Disney.

His mention of a route issue that “divided our community” was a reference to the rival interests who have debated for decades about whether rail service connecting the Orlando airport should follow a northern corridor or follow a simpler, less expensive, but less community-oriented southern corridor. The northern path would run more or less along State Road 528 and link with the convention center, International Drive and the theme parks around there, including Universal and SeaWorld. The southern option would run along State Road 417 from the airport to Disney World.

That battle raged unresolved for decades, and may have played a role when Gov. Rick Scott vetoed an earlier plan for high-speed rail in 2011. The rivalry emerged again in recent years as Brightline pursued its plans to connect Orlando to Tampa with its private higher-speed railroad.

“We think we’re in a pretty good spot,” Dyer said.

The Sunshine Corridor may split the difference.

The proposal would merge some plans that have been laying unfunded on desks at FDOT, SunRail and the Central Florida Expressway Authority with the proposals that Brightline has been pursuing, which would have taken the southern route via Disney. Brought together, these plans could be the basis of a united proposal for federal infrastructure money, Demings’ letter implied.

The Sunshine Corridor would have Brightline and SunRail share and upgrade existing railroad tracks, owned by the Orlando Utilities Commission, from the airport to the SunRail station at Pine Castle, near Orange Avenue. That station would be expanded and reconfigured as a train transfer station for SunRail and Brightline.

A new western rail line would be constructed from there to the Orange County Convention Center, around International Drive and State Road 528.

A new southern rail line would then be constructed from there to Walt Disney World along the Interstate 4 corridor. From there, it would continue westward from Disney to Tampa.

There also is the prospect that SunRail could use Brightline’s tracks to provide service from the airport heading eastward.

Brightline is already running intercity passenger trains through South Florida, from Miami to Fort Lauderdale to West Palm Beach. The company is also well underway in building a higher-speed rail line from West Palm to the Orlando Airport. Brightline still expects to finish the Orlando line by the end of 2022 and start carrying passengers between Orlando and South Florida in early 2023.

The Orlando to Tampa line has long been discussed as Brightline’s next phase. But competing interests quickly bogged the efforts to find the best way from the airport to some place southwest of Orlando.

Demings’ letter suggests an emerging consensus, and discusses the next steps, including exploring federal requirements, confirming costs, identifying funding sources and inviting Disney and FDOT to the next meeting.

“I realize that time is of the essence as the deadline to submit applications for infrastructure dollars is imminent,” the Orange County Mayor wrote. “I am hopeful we can build a transportation system that meets the needs of not only Orange County residents, but benefits all of Central Florida.”