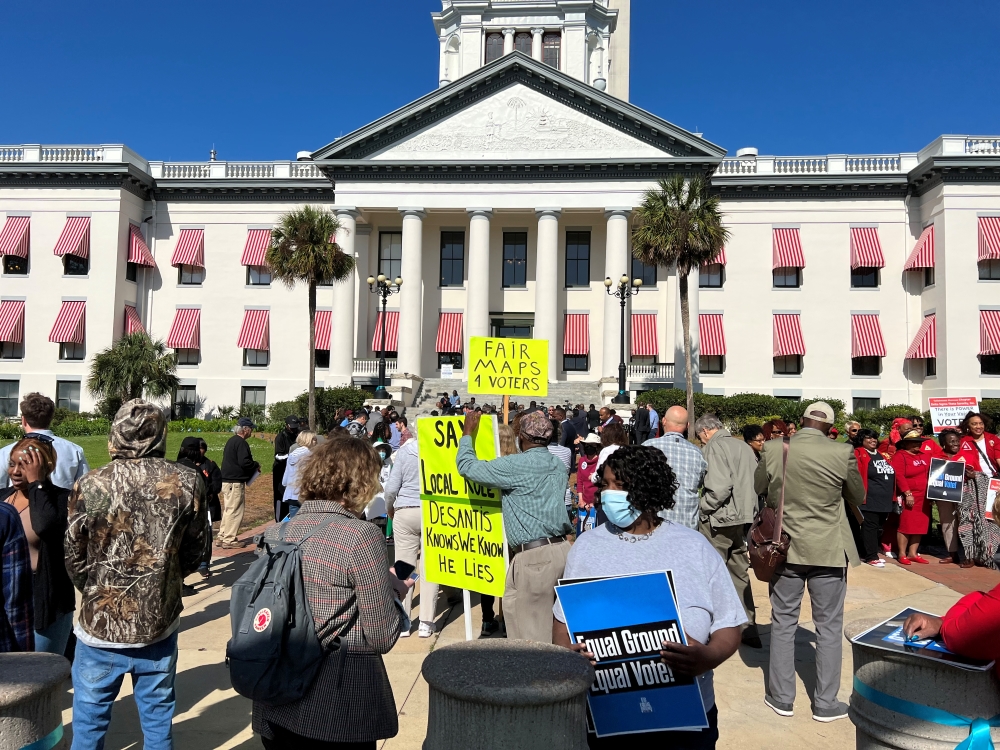 'I'm no longer calling it a culture war, it’s racist tactics in which the Governor is doing right now.'

Members of the Florida Legislative Black Caucus criticized Gov. Ron DeSantis and his involvement in congressional redistricting, decrying his map as an attack against Black representation.

The event, organized by the Black-led nonprofit organization Equal Ground, featured remarks from Sens. Shevrin Jones and Rosalind Osgood and Reps. Tracy Davis, Angie Nixon and Geraldine Thompson on the steps of the Florida Historic Capitol building. The legislators called DeSantis racist and likened his meddling in the redistricting process to voter suppression.

The event was held ahead of a Special Session where lawmakers are expected to pass a congressional map (P 0109) submitted by DeSantis. The map reshapes Florida’s 5th Congressional District, represented by Democratic U.S. Rep. Al Lawson. The current district spans from Tallahassee to Jacksonville and includes several predominantly Black populations, while DeSantis’ map splits those populations among three districts.

Prior to the rally’s kickoff, members of groups like Florida Rising, Northside Coalition of Jacksonville, the NAACP and other groups held up signs calling DeSantis a liar, asking for fair congressional maps and comparing the Republican-controlled redistricting process to the Jim Crow era.

Osgood kicked off the rally, arguing the Special Session and redistricting process has been manipulated by DeSantis to support his national political goals and ambitions.

“The Governor is showing complete disrespect for the supermajority of Floridians who voted for the Fair Districts amendment,” Osgood said. “He wants to take us back to a time when rigging districts for political gain and running roughshod over minority voters was permitted in Florida. We’re not going back. It was wrong then. It’s wrong now.”

Nixon argued DeSantis is only concerned about playing to a national conservative base.

“He’s never cared about the residents, workers and small business owners in the state of Florida,” Nixon said. “Instead, he’s more concerned with impressing folks on Fox News, trying to out-Trump (Donald) Trump himself in order to make a play for President of the United States.”

She took issue with his characterization of his congressional map as “race neutral.”

“Neutral means lacking color. Race neutral means the erasure of Black representation, similar to what the Governor asked the Legislature to do with HB 7 and the book bans. It’s a bold and systemic attempt to rig the rules and to erase Black history from our schools,” she said.

Thompson compared the lessening of Black minority access seats to the inequality that was enforced by Jim Crow laws.

During his remarks, Jones said he has changed what he is calling DeSantis’ actions.

“I’m no longer calling it a culture war, it’s racist tactics in which the Governor is doing right now,” Jones said. “You (DeSantis) think you can create laws against marginalized people, against Blacks, against gays, against indigenous, against Hispanics, but I have a message for you: When you come for one of us, you come for all of us.”

He also attacked DeSantis’ criticism of his political opponents as “woke,” saying he will know how woke they are during the 2022 election cycle and in years to come.

“Since we so woke, I want to let you know that when we leave here in Tallahassee, that we’re not just going to organize in our districts, we are going to step outside of our districts from Orlando, to Key West, to make it known that not only will you not be the Governor, but we’ll make sure you’re not the President of the United States,” Jones said.

Davis said the only way changes and protections will be made is if young people show up to vote in 2022. She encouraged them to vote for the people who are not here to vote themselves.