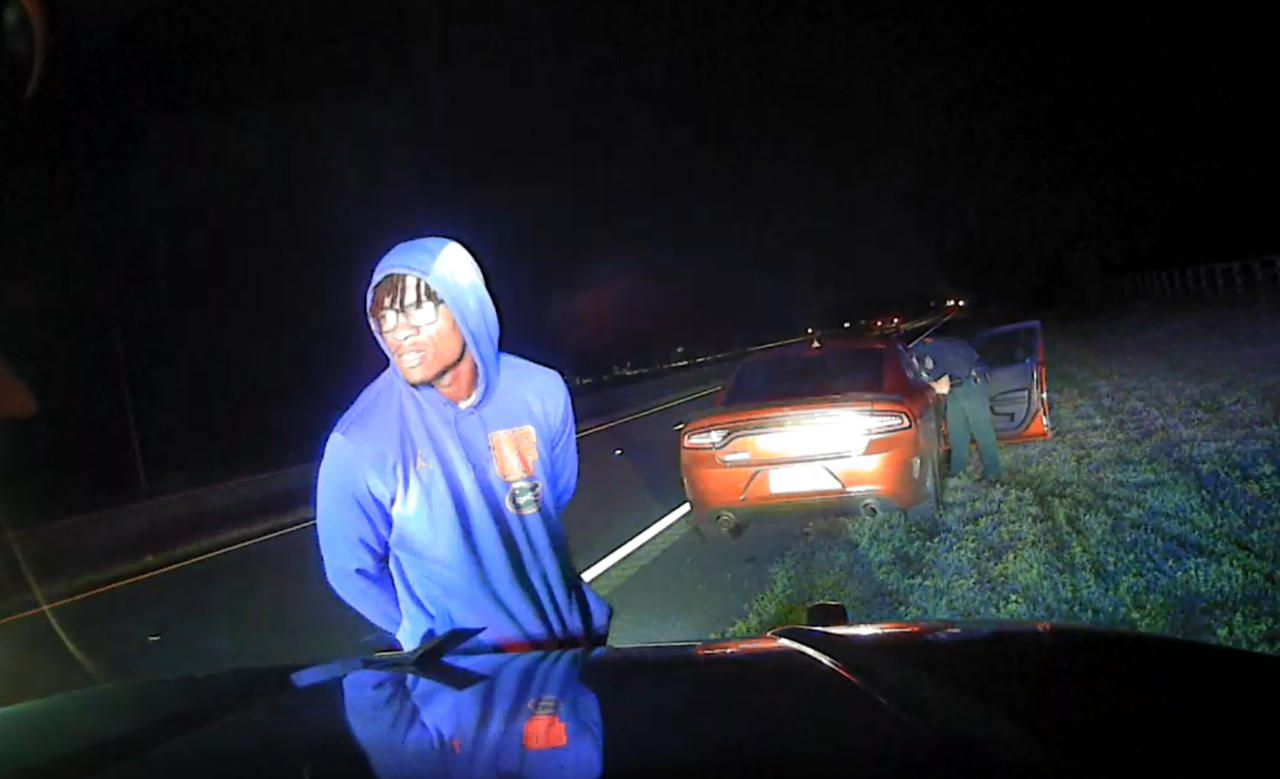 'I know I’m not perfect, but it was a mistake.'

Anthony Richardson, the young University of Florida quarterback who has electrified fans, could have been ticketed for driving faster than 105 mph earlier this month, but the Sheriff’s deputy’s pickup that briefly pursued him couldn’t go any faster, according to new video of the traffic stop released Tuesday.

In the video, Richardson acknowledged driving at least 100 mph and said he wasn’t sure how fast he was going. His lawyer filed a not guilty plea in the case Tuesday, despite Richardson’s apparent admission on video and his public apology last week.

“When you saw my lights come on, how fast were you going?” asked Alachua County Sheriff’s Deputy Eric Pai, as Richardson shifted his weight in front of the Sheriff’s cruiser wearing a blue Gators hoodie. Another deputy can be seen searching the passenger area of Richardson’s car.

“I’m not sure, probably like a hundred or something,” Richardson said.

“So, the only reason I can’t write him for 50 over is because this thing won’t go 50 over,” Pai said on the video. A Sheriff’s spokesman, Art Fogey, said Pai was referring to his Ford Police Responder F150 pickup, which is governed to drive no faster than 105 mph.

“The 105 mph is what he was able to pace the violator at,” Forgey said. “He was not able to establish any higher speed.”

The top speed for a base model 2021 Dodge Charger is at least 147 mph, according to its manufacturer. Some Charger models with larger engines can reach 203 mph.

Richardson did not speak extensively during the roadside encounter, and neither Richardson nor the deputy referred to the quarterback’s status as one of Florida’s most important football players. Richardson pulled over almost immediately as soon as the deputy behind him turned on his emergency lights, the video showed. He answered respectfully, “Yes, sir,” when the deputy lectured him to slow down.

“I would suggest highly that you slow down because this time of the morning there is a lot of truck traffic, and there are a couple of troopers who like to hang out on this road, OK, and they probably won’t be so nice to you,” Pai said. He warned Richardson that if he were caught again driving so fast, “they will probably take you to jail.”

The Sheriff’s videos of the traffic stop were obtained Tuesday under Florida’s public records law by Fresh Take Florida, a news service of the University of Florida College of Journalism and Communications. They included about one hour’s worth of footage from the deputy’s body cam, dashboard cam and an in-car camera. The Sheriff’s Office charged $99 for an employee to preview and censor any details that could be exempt from disclosure under the law.

The deputy ticketed Richardson, Florida’s redshirt sophomore quarterback, at 4:11 a.m. April 4. A line on the ticket said Richardson’s copper-colored 2021 Dodge Charger was caught on radar driving 105 mph on a remote stretch of a divided, four-lane highway with a 60 mph limit about 12 miles west of the university’s campus. Elsewhere on the same ticket, it said Richardson was driving “in excess of” 105 mph but did not specify a faster speed.

During the traffic stop, tractor-trailer rigs and commercial dump trucks can be seen driving past regularly.

Under new NCAA rules allowing players to accept payments, Richardson signed a deal in November with a local Dodge dealership that provides him with a 2021 Dodge SUV or its equivalent with an option to exchange it every three to six months through the 2023 season. Richardson told the deputy when he was stopped April 4 he was driving one of the dealership’s cars.

Also Tuesday, Richardson’s lawyer, Richard Buzan of Gainesville, filed a not guilty plea on the quarterback’s behalf, waived his upcoming May 25 arraignment and asked for a court hearing in the case. The court set a hearing for June 8. Buzan did not immediately return phone messages left at his office.

The ticket said Richardson was driving a Dodge coupe, but the deputies on the video described his car having four doors. The car in the video appeared to be a four-door Charger.

Richardson, 19, of Gainesville has already apologized publicly for speeding so fast and said last week he promised his teammates he would work not to embarrass the organization again. His speeding ticket was first reported last week by the Tampa Bay Times.

“I know I’m not perfect, but it was a mistake,” Richardson told Gators Online. “I was speeding. My mom always tells me to drive safe, because I can not only hurt myself but I can hurt other people. I shouldn’t have done it, and I can definitely say I learned my lesson.”

The exact amount that Richardson was accused of exceeding the speed limit is significant under Florida law. A driver caught speeding 50 mph over the limit — or 110 mph in this case — would face a mandatory $1,000 fine, could have his license suspended and could be ordered to attend driving school.

Being ticketed for 105 mph, Richardson could avoid the $1,000 mandatory fine and possible license suspension even if he were convicted. Instead, he was charged in state circuit court with exceeding the speed limit by at least 30 mph. Fines for speeding at least 30 mph over the limit can reach up to $1,000 but are frequently lower, and a judge could suspend his license.

This month’s excessive speeding ticket wasn’t the first traffic problem for Florida’s quarterbacks. Gainesville police last month ticketed Emory Jones, Florida’s former starting quarterback who decided to enter the transfer portal to play for another team, for careless driving after a minor crash the afternoon of March 23 and fined him $159.

That traffic case is still unfolding in circuit court. The accident happened just blocks from UF’s football stadium. No one was hurt, police said.

In an earlier case, Jones fumbled food in his lap in April 2018 and caused a chain-reaction crash that included two other vehicles, including one driven by an FBI agent from Jacksonville. The wreck, which also had not previously been reported, happened in the afternoon at nearly the same location as Jones’ crash last month, according to police records.

Jones pleaded no contest to careless driving in that earlier crash and also was fined $159. The third driver in the accident, whose car Jones rear-ended and pushed into the FBI agent’s car, settled a civil lawsuit against Jones and the player’s mother last year. That driver had sought more than $30,000 for injuries he said he sustained and has declined to discuss the out-of-court settlement.

Chasity Maynard reporting; produced by Fresh Take Florida, a news service of the University of Florida College of Journalism and Communications. The reporter can be reached at [email protected].