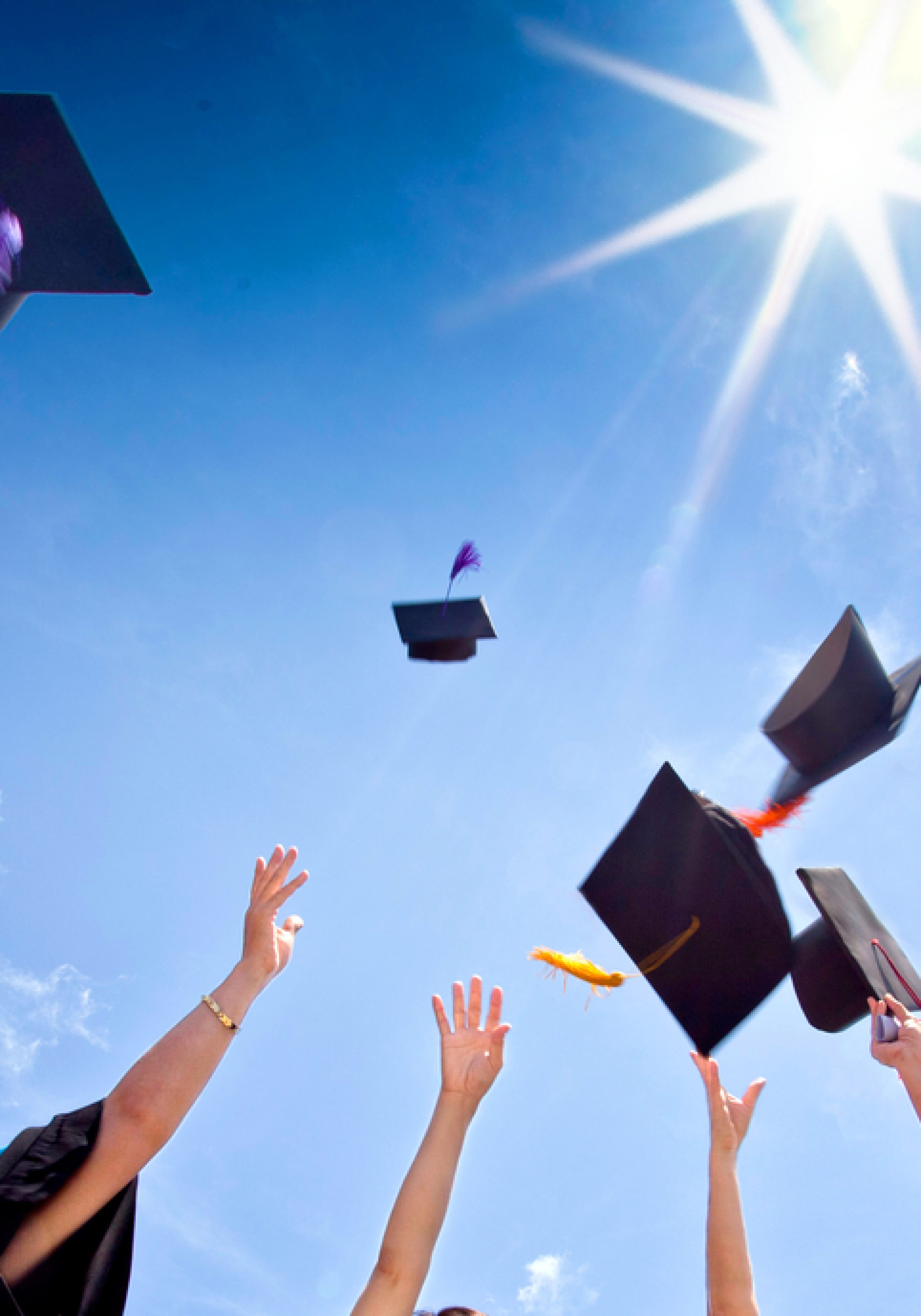 Here are the stories of students being lauded by Florida’s universities during graduation season.

The pandemic left a stain on the college experience for students.

For the class of 2022, their time was split in halves — virtual and in-person. College students adapted to “distanced” and classroom learning while routinely being administered COVID-19 tests. Students traded their extracurricular activities, sports games and parties for endless Zoom meetings and masks. Some dealt with academic responsibilities while sick with the virus. Many lost loved ones.

Despite maneuvering through college classes during a global health crisis, graduates across Florida universities pushed toward the finish line. While the coronavirus injected “what ifs” into their memories, others adapted, pivoted and realigned their goals.

Here are the stories of students being lauded by Florida’s universities during graduation season for overcoming obstacles, generational cycles and adversity to make their way to the graduation stage.

Ashley Gonzalez-Ferraro, 20, started at Florida State University when she was 17. She’s the daughter of two Colombian immigrants, and her father was deported when she was 6.

Growing up, she lived with her grandmother and her mother, who worked 80 hours a week to support her and her brother. She remembers assuring her mom she would find a way to attend college knowing that her family couldn’t afford it.

“As a child of immigrants, there’s always one that you know is the person that has to show the face for the family, has to do something and has to sustain the family in the future, and I was always that kid that had to do something,” she said.

She earned her associate’s degree, knowing it would boost her chances of attending a university. She applied to FSU’s Center for Academic Retention and Enhancement, which offers financial support for low-income and first-generation students through scholarships.

When she applied to the center, Gonzalez thought she was joining a campus club and was unaware of the program’s full benefits. Little did she know that it could help her fulfill a lifelong dream to go to college free of charge.

She was accepted into the program and has earned a dual degree in international affairs and criminology in three years.

Her mom’s strength is her biggest inspiration.

“I owe everything to her,” she said. “What I’m doing is for her and for all of her sacrifices for us.”

She will pursue a master’s degree in criminology and hopes to attend an Ivy League law school. Asked what her dream job would be, she laughed and said becoming Attorney General of the United States.

“I mean, that would be amazing,” she said.

She’s a mother of three — and a student

Jeanette-Marie Reynoso stepped onto her first college campus in fall 2006, with a garbage bag full of clothes and her personal documents.

While Reynoso settled into Fairleigh Dickinson University in New Jersey, she watched as parents showered their children with hugs, kisses and brand-new everythings. Her imposter syndrome birthed a sea of insecurities — she was a foster kid who aged out of the system with no guidance in life, let alone about college.

“I was sitting in algebra class. I had no idea how to do algebra, like 0% of a clue. I never took algebra in high school. I just remember crying after class like I’m just not prepared for this,” she said.

In her first year, Reynoso was failing. She withdrew from classes, joined AmeriCorps to teach for a year and life soon followed. The New Jersey resident became a wife and mother to three.

After getting pregnant, Reynoso and her husband moved to Florida in 2007 to be closer to her husband’s family. Reynoso, who is 35, returned to school four years ago, aiming to join her youngest child as he entered kindergarten.

Going back to college was not easy, a reminder of her past failure. An academic adviser at Seminole State College in central Florida asked why she was returning to school after so many years. The adviser’s next words would cut deeply into Reynoso’s insecurities: “If you failed once, you’ll probably fail again,” Reynoso recalled the adviser telling her.

She proved her academic adviser wrong. She graduated with a 4.0 grade point average and transferred to the University of Central Florida in January 2020. Balancing being a mom and a college student was tough; she only attended classes Wednesdays.

Three weeks into her first semester, the global pandemic hit. She remained involved. She became a Ronald McNair Scholar, joined summer research programs at Vanderbilt University, accepted a full-time internship at an elementary school and received a job offer as a teacher.

Her greatest achievement is breaking the generational cycle, she said. Being the daughter of a teenage mom and having grown up in the foster system, Reynoso lives by the adage, “progress over perfection.”

As she accepted the top honors from her college at UCF, her own children, wearing Knight merch, fantasized about going to college.

“I realized in that moment, ‘Oh my gosh, I broke the cycle for them’,” she said. “When they come to UCF, they’re not going to be first-gen students.”

After she walks the stage in May, Reynoso hopes to join her son as they both embark on new journeys — he will go to kindergarten and she will be a teacher in Seminole County. With her degree in elementary education, she plans to enter UCF’s master’s program. In five years, Reynoso hopes to earn her doctorate from UCF and work toward becoming a superintendent.

‘A voice for the underrepresented’

D’Vodrek Ponder, 22, immediately became a leader when he stepped onto Florida State University’s campus. As a first-generation student and part of a program that supports minority students, Ponder found comfort and community within the Black Student Union and the school’s Center for Academic Retention and Enhancement.

As the director of the Coalition Of Black Organizational Leadership, he worked to ensure the organizations on campus received the funding, programming and tools they needed to succeed.

During the pandemic, he served as president of the union and rearranged its programming plans. His plan included drive-in movie theater events, participating in protests and other campus activities.

Ponder said college taught him to prioritize staying true to his passions by using his time and energy to care for others.

“One thing I’ve been taught is I don’t want to work my entire life because if you really enjoy what you’re doing, it’s not really considered work,” Ponder said. “When it comes to impacting your community, uplifting one another, being a voice for the underrepresented, not being afraid to ask the hard questions and being bold in doing so has definitely prepared me to be the person I want to be.”

He’s found love in helping others, and he wants to continue to guide students’ lives in the future. In a couple years, Ponder, who earned a political science degree and a minor in African American studies, sees himself working in student affairs at an SEC university.

First in her family to hold a doctorate?

Yasmine Adams, 22, had the word “college” etched in her brain growing up. Her mother reminded her and her brother of a life of struggles that came with not having a degree, especially in a single-parent household.

The first-generation student from West Palm Beach had only one problem — figuring out a major. When Adams arrived at the University of Florida, it was zoology. Before the first semester ended, she had dropped two classes and switched her focus to English.

“Chemistry was not my friend.” she said.

The last four years for Adams have been focused on self-discovery. She picked up two minors, became a Florida Cicerone student ambassador and started anthropology research as a McNair Scholar.

Adams said changing her major was a defining experience because she felt like a failure. The stress of her looming future caused tearful breakdowns talking to her mother.

“She said, ‘Don’t you think you have struggled enough?’ And I was like, ‘You know what, you’re right’.”

Adams’ motto is “embrace change.” Through trial and error, she discovered a love for African American studies and anthropology — her two minors. She said one of her proudest achievements was presenting research at a conference in Salt Lake City because it affirmed her decision to study anthropology.

Adams said she wishes she had listened to herself sooner in deciding on a career. Being a first-generation student, Adams said, it’s easy for young people like her to allow others’ projections and insecurities to dictate their choices.

In five years, she hopes to be preparing to defend a dissertation in a Ph.D. program for anthropology, becoming the first in her family to hold a doctorate.

After crossing the graduation stage in April, Adams will look for her mom to hug.

‘I kind of want to be the next Oprah’

Carrington Whigham, 22, always knew she was bound for Florida Agricultural Mechanical University. The Dallas native would be a third-generation Rattler.

Whigham graduated from a top performing arts school in Texas, opening doors to schools like Juilliard and New York University. But Tallahassee had what she wanted: a historically black college or university. For her, continuing the family legacy of FAMU graduates was necessary. Her father was the student body president, a position she earned her senior year.

With a background in the arts, Whigham entered college as a theater minor. Eventually, she gravitated to broadcast journalism, where she became a producer for FAMU-TV20, the school’s educational access cable channel that reaches 80,000 households, and a writer for the Famuan, the school newspaper.

During her freshman year, she ran for a position in the student legislative body. Within four years, Whigham became election and appointments chairwoman, vice president and eventually student body president. She found her niche on campus.

Whigham said she believes the pandemic helped elevate her career at FAMU as opportunities were more accessible through Zoom. Throughout the last two years, she’s been a part of forums that included voting, vaccinations and social justice.

Whigham was chosen as an AT&T Black Rising Future Maker, a title earned by influential HBCU students around the nation. The White House invited Whigham to speak at a COVID-19 vaccination roundtable in Tallahassee as its collegiate representative last summer.

Aside from having chats alongside celebrities like Dwayne Wade and Keke Palmer to encourage voting, she earned a spot on ESPN’s First Take talk show to promote HBCUs, including FAMU.

Whigham hopes to see herself in front of a camera for a major media company using her platform to tell uplifting Black stories.

“I kind of want to be the next Oprah,” she said.

___
Melissa Hernandez De La Cruz and Daniella Sevares reporting; produced by Fresh Take Florida, a news service of the University of Florida College of Journalism and Communications. The reporters can be reached at [email protected]freshtakeflorida.com and [email protected]. You can donate to support our students here.