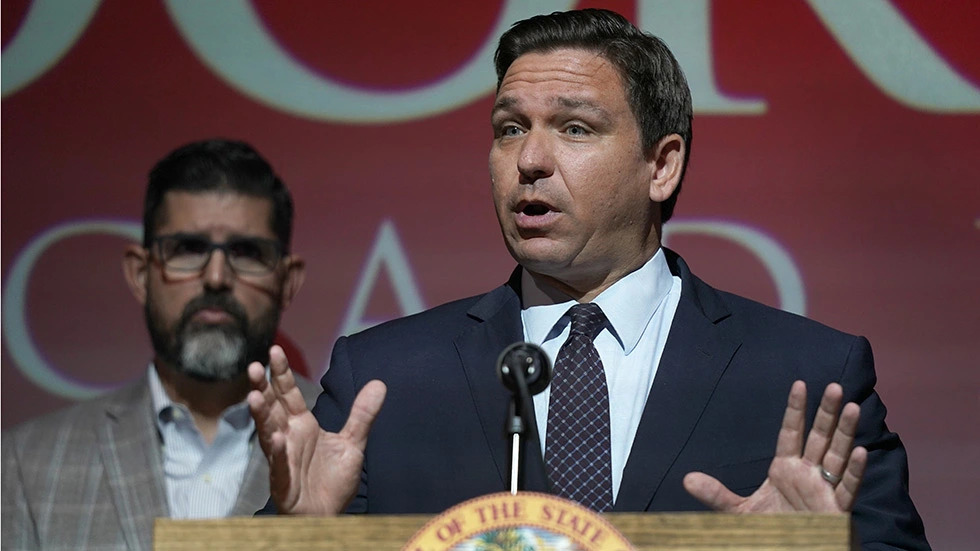 DeSantis says, as a parent, he's concerned about what Disney is trying to teach kids about sexuality, like 'pansexualism.'

“We are not going to use your tax dollars to teach our kids to hate this country or to hate each other,” DeSantis said before signing the bill in Hialeah.

The “Stop W.O.K.E.” name used by DeSantis, short for “Stop the Wrongs to Our Kids and Employees,” references the acknowledgement of injustices in American society in a manner often touted by the left but vilified by the right. Formally, lawmakers called the measure the Individual Freedom bill.

Republicans nationwide have made critical race theory an election focal point in the culture war. While DeSantis said Florida was at the “cutting edge” of anti-woke law, multiple states, including Texas, have already passed laws banning critical race theory or associated lessons.

The theory, which is taught in law schools but that DeSantis argued is also an “overall worldview,” posits that racial disparities have a continual influence on institutional structures.

In Florida, DeSantis is on the ballot in November, along with candidates for all state House and Senate offices.

Rep. Ramon Alexander, a Tallahassee Democrat who is expected to lead the House Democratic Caucus next legislative term, called Friday a sad day in Florida’s history.

“I truly believe this legislation furthers systematic racism as an attempt to erase and whitewash American history. It’s a delusional culture war GOP issue. And it dismantles the progress that has been made to create diversity and inclusion training in the workplace, and to teach our kids history,” Alexander said in a prepared statement.

“This sets us back in progress made that will continue to divide us rather than bringing unity and teaching the full history of the United States of America.”

The Holocaust, slavery, the Civil War and the Civil Rights Movement are still part of the history curriculum, the Governor noted.

“We teach all of that because it’s real history and it’s important,” DeSantis said. “But what we will not do is let people distort history to try to serve their current ideological goals.”

The bill signing also followed the Florida Department of Education’s release this week of several examples from rejected mathematics textbooks considered “impermissible” by the Department after receiving a mass of requests in response to the agency’s significant cut of approved instructional material. The department provided examples feature math problems that contain “prohibited topics,” like social-emotional learning and references to studies that feature topics like race and racism.

DeSantis also lambasted Disney — as he has since the entertainment giant condemned Florida’s Parental Rights in Education law known by critics as the “Don’t Say Gay” bill — for an “intentional agenda to inject sexuality” into programming for young children. The Governor, the father to three children 5 and younger, pointed to leaked videos from a Walt Disney Company executive meeting discussing how cast members should address LGBTQ issues with visitors.

“As a parent, I was very shaken by hearing that, because it’s one thing to talk about legislation … but when you’re talking about these acknowledgments and really the glee that these people had in these videos that they were going to get this stuff and they were talking about concepts like pansexualism, I thought to myself, ‘I don’t know what that means, but I know I don’t want my 5-year-old daughter to be taught it,'” DeSantis said.

“We’re going to give you the weekend to make some adjustments to immediately abolish this program, because on Monday, if this is still part of Disney’s Human Resources program, there will be consequences,” Rufo said.

Soon after DeSantis signed the legislation, lawyers at Sheppard, White, Kachergus, DeMaggio & Wilkison filed a lawsuit against the state on behalf of parents and teachers who argue the law violates the First Amendment.

“The First Amendment requires us to decide these issues through open and free debate, not by the fiat of Florida’s Governor and Legislature through constitutionally oppressive legislation that prohibits discussion of these matters,” attorneys Jesse Wilkison and Matthew Kachergus said in a statement. “This bill grossly infringes on the First Amendment’s fundamental guarantees of academic freedom, freedom of expression, and students’ right to access information regarding these topics.”

“This bill is a vile attempt to erase our country’s history, censor businesses and schools, and whitewash history. It’s unconstitutional and racist,” Fried said. “This is just more state-sanctioned hatred and censorship coming from Gov. DeSantis and Republicans in the Legislature.”

He also announced he earlier signed the state’s new congressional district maps, which the Legislature similarly passed Thursday. Democrats and voting rights advocates contend the new district boundaries are a political gerrymander and will reduce Black representation in Congress. Rep. Kamia Brown, an Ocoee Democrat who is expected to lead the Legislative Black Caucus next term, linked all four bills together in a statement targeting the Individual Freedom bill.

“With the Governor choosing to sign this bill this week, two things are very clear to me,” Brown said. “The first is that the motivation behind both his map and this anti-woke bill is racially charged and meant to silence Black voices as well as erase the history and legacy of Black people. The second is to cause a distraction to Floridians’ reactions to his politically motivated retaliation against Disney that will fall on the backs of local counties, the tourism industry, and Central Florida taxpayers.”

nextBlake Dowling: Give me Twitter, or give me death!